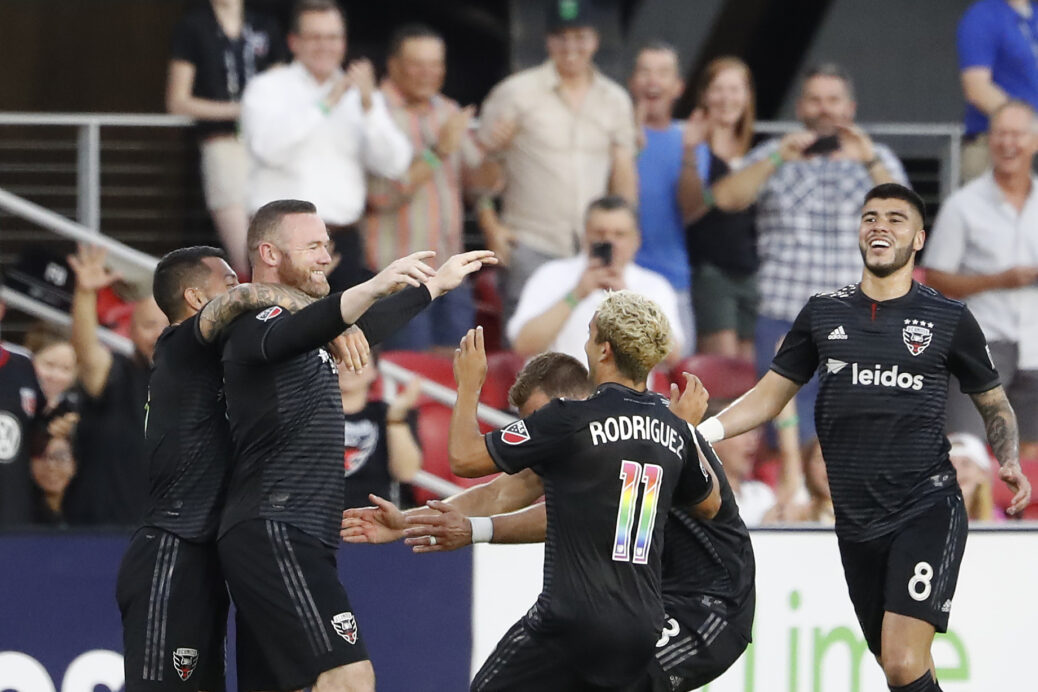 Wednesday’s MLS action offered six tilts, headlined by the league’s most recent Cup winners as Toronto FC played host to Atlanta United for a back and forth battle that ended in dramatic fashion.

The East’s first-place Philadelphia Union barely avoided an upset in New England and Wayne Rooney found a long-range goal to remember against Orlando.

Here’s a closer look at all of the midweek action from Week 17.

Both teams came in fresh off their respective U.S.bOpen Cup exits, The Revs played host to the Union at Gillette Stadium.

Brandon Bye opened the scoring in the 31st-minute from a corner. Charles Gil set it up for the defender who was isolated in the box and blasted an uncontested rocket past three Union jerseys for his second goal of the season.

Kacper Przybylko equalized for Philly in the 84th-minute after cleaning up a Fafà Picault ricochet. The goal marks number five on the year for the Polish striker.

The strike was good enough to avoid the upset and keep Philadelphia atop of the Eastern Conference while Bruce Arena has New England maintaining a five-game unbeaten run.

Storms at Stade Saputo delayed the regular season’s only edition of the interconference matchup for around 40 minutes.

Orji Okwonkwo got things going for Montréal in the 28thaminute with a wonder strike, hitting the net on the far-post side with his right foot from inside the box. The play was set up with a perfectly placed ball from Bacary Sagna against the run of play.

Timbers’ Tomás Conechny equalized in the 53rd-minute from a set piece. A sequence of Marvin Loría and Julio Cascante teed up the opportunity and the Argentine put it away with his head for the first goal of his MLS career.

Okwonkwo had the final say of the evening though with a stunner in the 66th. Saphir Taïder set up a ball behind Okwonkwo who turned at hit the top bin on the volley. The brace marks four goals on the campaign for the 21-year-old Nigerian.

The win puts the Impact only two points off of Philadelphia for the lead in the Eastern Conference standings.

Atlanta’s Andrew Carelton factored himself out of the game after forgetting his passport, leaving the team with a six-man bench for the road test.

Tsubasa Endoh wasted no time opening up the scoring for the home team at BMO field, earning the fastest goal in club history after running into a perfectly placed ball from Jacob Shaffelburg right in front of Brad Guzan, who couldn’t react fast enough. The goal serves as the first of the season for Endoh.

However, the visitors made the most of the ensuing opportunities as Toronto’s Alejandro Pozuelo was guilty of a handball, prompting a Pity Martinez PK at the 17th-minute.

Julian Gressel earned his third goal of the season moments later when he punished the Toronto backline with a ball from point-blank after two defenders were unable to clear a ball from Brandon Vásquez.

If three goals in the first half weren’t enough, the 27th-minute saw Toronto’s Pozuelo redeem his earlier blunder with a headed connection from a Jacob Shaffelburg dime. The play was once again too close to Guzan for him to have a chance.

Extra time saw Richie Laryea go down in the box after being double teamed by Miles Robinson and Florentin Pogba, the contact was questionable but VAR review didn’t overturn the initial PK decision. Alejandro Pozuelo struck again, burying the penalty.

Atlanta’s last touch of the game saw Nick DeLeon commit a handball at the death. Toronto’s postgame ceremonies were cut short as VAR confirmed Atlanta was indeed owed a penalty. Martinez went a little too high and handed Toronto a dramatic win to end an eight-game winless skid.

After bouncing out of the U.S. Open Cup, D.C. United got things back on track at Audi Field, making the most of Orlando missing five to International duty.

Missing a nearly wide-open chance in the seventh minute, Wayne Rooney more than made up for it when he earned his ninth goal of the season in about as many minutes on a truly must-see strike from his own half with an immediate goal of the year contender.

A late breakaway from Ulises Segura nearly doubled the lead, but VAR ruled him just offside.

Despite staying interested, Orlando wasn’t able to find the equalizer as D.C. earned its first win in the last five attempts to remain in third place in the East, while Orlando remains inconsistent on the year and will remain in ninth.

The win sees D.C. take both of the regular-season matchups.

Unbeaten in Frisco so far this season, FC Dallas let a win on home turf slip out of hand late.

It took until the second half but Colombians connected in the 55th-minute as 18-year-old Jesús Ferreira opened things up with a tap-in thanks to a Michael Barrios breakaway that took Whitecaps’ goalkeeper Sean Melvin away from the action.

Ryan Hollingshead doubled the lead in the 59th from the edge of the box, blasting a sneaky rope by Melvin.

Yordy Reyna kept things interesting for Vancouver with an 81st-minute goal after fighting through traffic, good for his third of the season, but it was Lucas Venuto, who came on in the 66th minute who found the equalizer from outside the box, in traffic, and with power.

The draw puts Dallas unbeaten in its last four and Vancouver’s streak grows to six.

The Earthquakes avenged April’s 2-1 defeat to Houston in style at Avaya Stadium as they with a thorough, heavy-handed performance.

A short-corner saw Valeri “Vako” Qazaishvili break the deadlock in the 23rd-minute with a tidy heel flick that floated past Dynamo goalkeeper Joe Willis, good for Vako’s second goal of the season.

A trio missed opportunities between Magnus Eriksson Chris Wondolowski kept Houston alive, yet unable to create any real chances as Quakes goalkeeper Daniel Vega amassed only one save on the evening.

Vako struck again in the 75th after linking with Tommy Thompson for a quick turn-and-shoot from deep in the box. The brace puts Vako at three goals on the MLS campaign.

The win sends Matías Almeyda’s Earthquakes to five unbeaten games in a row while The Dynamo is now winless in four.