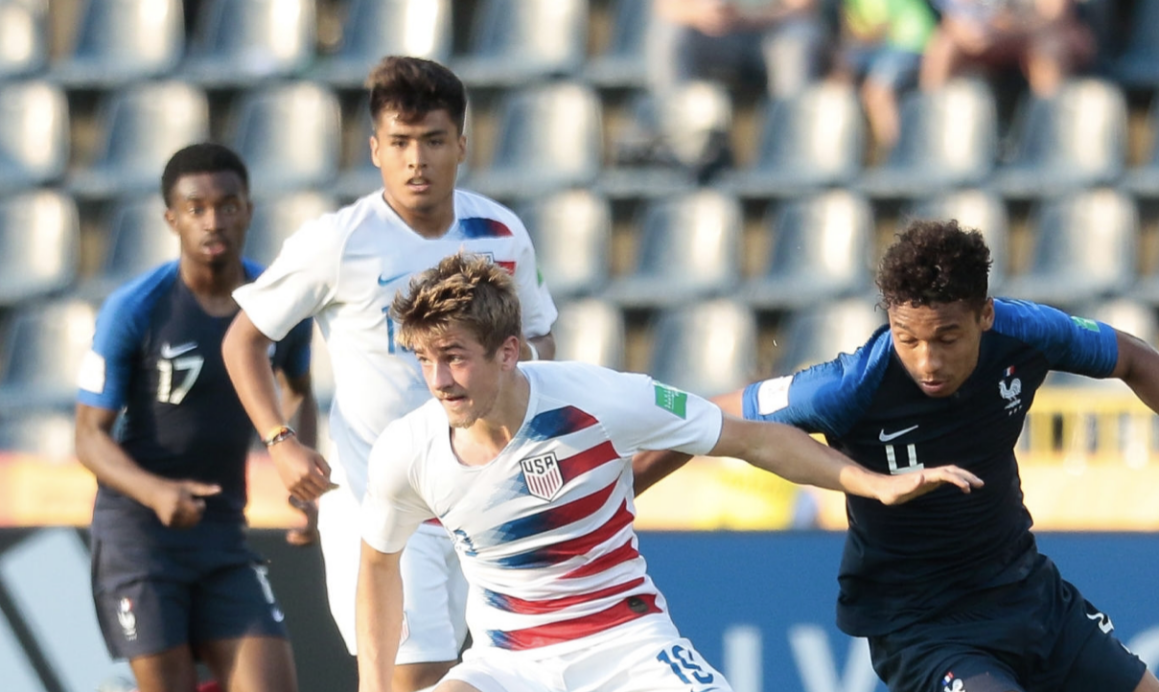 The U.S. Under-20 Men’s National Team pulled off one of (if not the biggest) upsets of this World Cup on Tuesday, combining the traditional American grit and determination with a dose of efficiency in front of goal to come from behind and shock France, 3-2. The rally took place in the final 16 minutes of the game, and pushed the U.S. through to the quarterfinals for the third time in as many competitions.

Here are some thoughts on the victory:

Tab Ramos caught some flak last week, including here on SBI, for not rotating his squad enough in that flat performance vs. Qatar. On Tuesday, however, he deserved plenty of praise.

Ramos pushed all the right buttons after the U.S. went down 2-1 in the second half, particularly with his substitutions, and that made the world of difference as the Americans mounted a memorable comeback. The U.S. head coach inserted Ulysses Llanez and Justin Rennicks for an ineffective Konrad De La Fuente and exhausted Richard Ledezma, respectively, and both reserves made an impact.

The most significant contribution obviously came from Rennicks, who did just what you’re taught when you’re learning the game as a kid by following up a shot, in this case Sergino Dest’s effort from distance

Nine times out of 10, that shot is swallowed by the goalkeeper or parried wide, which is why making that run can seem pointless and tedious. Rennicks, however, alertly realized the chance for a rebound as the ball was getting to goalkeeper Alban Lafont — who, it came out afterwards, was playing with an injured wrist — and his dogged determination to get to it first had him and the U.S. reaping the rewards.

Justin Rennicks cleans up the rebound and gives the USA a 3-2 lead. The Baby Yanks are minutes away from the U-20 World Cup quarterfinals! pic.twitter.com/s0Ng4aQmLT

In Llanez’s case, it was the second straight match in which he brought an injection of energy and a willingness to go at defenders. Llanez also moved the ball well, with his finding of Tim Weah in the lead-up to Sebastian Soto’s equalizer notable.

Llanez looked so good in his 27 minutes of action on Tuesday, and in his previous cameo vs. Qatar, that you have to think Ramos is considering starting him against Ecuador. It is not clear if Llanez is fit enough to go the distance as a starter, but if he is or if he is close to it, then he should get the nod over De La Fuente, who has started every game on the right wing thus far despite struggling with his decision-making and final ball.

One of the main characteristics that have long been a staple of U.S. Men’s National Teams, though not as much in recent years, is resiliency. It was on full display vs. France and pivotal to orchestrating the comeback.

The young Americans demonstrated that never-say-die attitude — against a more talented opponent, no less — throughout the game but especially after falling behind 10 minutes into the second half. Rather than look out of sorts and out of answers after Nabil Alioui fired home to put France up 2-1, the U.S. stuck with it and kept trying to find a way.

Ramos’ first two substitutions obviously provided a big boost, but the group as a whole just did not seem all that fazed or ready to throw in the towel. The Americans’ response to going down was just what you would hope for from your team if you’re a coach, as the players kept on playing and pushing for an equalizer that eventually came.

Tim Weah this time with the lovely assist as the USA have tied it up against France, 2-2, in the 2nd half! pic.twitter.com/A0ZvR3uQsk

Seeing that mental fortitude, grit, and heart on display should be a welcome sign for U.S. fans, especially after witnessing the senior national team fold multiple times in recent years when faced with adversity. The young Americans may have gotten smacked in the face by France shortly after halftime, but they punched back and ultimately landed the knockout blow.

It should also be noted that the U.S.’s efficiency in front of goal, especially that of the clinical Soto, was a key factor in advancing. The Americans put just four shots on target against France, but three of those were taken with aplomb.

While there is no denying that the U.S. put forth a heck of a fight to claw back from 2-1 down against a superior opponent, the late push and final result should not blind anyone of the Americans’ poor performance over 90 minutes. Yes, the result matters most, but the overall showing is also worth taking into account.

In that regard, analyzing the totality of the match and not just the result, it’s clear the U.S. was the worse of the two sides on the balance of play on Tuesday. The Americans looked outmatched and struggled largely for much of the first 60-65 minutes, allowing France to dictate the tempo and create good looks (one in front of the net was headed off target due to a poor cross and another off a nice sequence kissed the post before rolling out of play) while misfiring on plenty of their passes themselves.

The U.S. only managed to look threatening on the counter in the first half and things got worse early on in the second stanza after France made the halftime adjustment of getting back into its shape after losing the ball rather than pressing immediately like it did in the first half. It seems the French learned their lesson as to how deadly the Americans can be in transition after conceding the 25th-minute opener via a well-taken effort from Soto.

Richard Ledesma and Sebastian Soto combined for the USA's opening goal in their Round of 16 game against U-20 World Cup favorites France.

It's currently 1-1 at halftime. Don't miss the second half LIVE on FS2! pic.twitter.com/rykdFBpjfY

What followed was the U.S. struggling to inflict any damage on France, which won the possession battle on the day by a 62-38 mark. Making matters worse was that France’s attack did well to create space to exploit against the Americans, outshooting them by a 15-7 margin.

The back line had avoidable breakdowns, too, primarily on the second France goal when left back Chris Gloster was caught out of position, Aboubacar Keita torched, and Dest ball-watching. The first goal was due more to Ramos’ poor instructions to press high on a goal kick rather than get organized and in shape, but the U.S. as a whole could not find a way to slow down France up until playmaker Moussa Diaby suffered what seemed to be at least one knock midway through the second half.

Of course, the Americans overcame all of that thanks in part to their heart and a high efficiency in front of goal, but that should not mask their overall showing.

Yes, the the end result for the U.S. was superb. The overall display, however, was subpar.