As rest of world catches up, ‘arrogrant’ USWNT continue to hold top spot 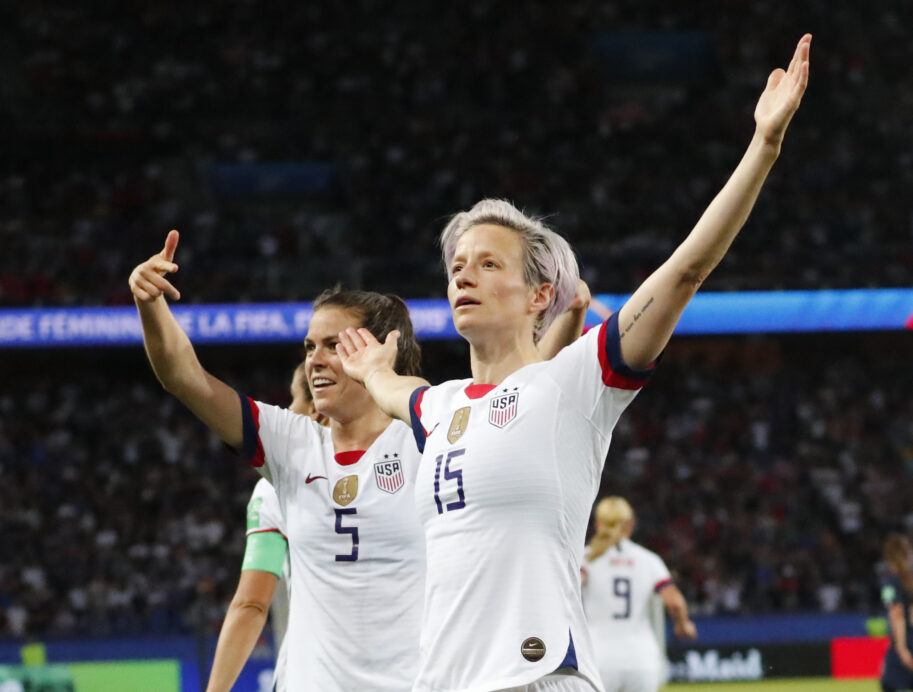 To its credit, they’ve proven that favoritism right so far. They blanked its opponents during the group stage and won the matches they’re supposed to win entering Tuesday’s semifinal against England – ranked third in the world and the highest-ranked remaining side other than the U.S. in the tournament.

The USWNT has played fairly well, especially defensively during the tournament, conceding just twice with the two goals coming in the knockout round wins over Spain and France, but the attack has left a lot more to be desired.

As the rest of the world looks to prove that they’re catching up to the USWNT – England will look to prove that on the biggest stage in the sport on Tuesday – the USWNT has also earned another label: arrogant.

After U.S. team officials were caught in the Lionesses’ hotel on Sunday in a potential spygate situation, being dubbed officially as “Hotelgate,” a British tabloid posed the question if the Americans were being too arrogant during their World Cup run.

“I don’t think our team is arrogant at all. I think our team is confident,” forward Christen Press said reporters on Tuesday in Lyon. “We’re respectful of our opponents and the way that we respect them is by preparing for each game as if the opponent that we’re going to play is the best in the world.

She added: “I think that – on top of the level of intensity and preparation and effort that goes into each game – is the best way to respect who you are playing.

“And that confidence is beautiful and that’s a big part of the U.S. Women’s National Team’s legacy and it’s actually an important part that we really hope that our performances are helping and spreading to others in the world, and the next generations look and sees that and feels that and carries that on.”

Press also had a quick response about Lucy Bronze getting the “best player in the world” label.

All of this comes after the U.S.was heavily criticized for their celebrations of all 13 goals against an inferior Thailand side in the opener of the group stage. They only scored five more goals the rest of the group stage and haven’t been as dominant in the knockouts.

Spain gave the United States a solid run before a questionable penalty against Rose Lavelle in the Spanish 18-yard-box gave Megan Rapinoe her second penalty kick of the game to put the USWNT up 2-1 in the Round of 16. Two defensive lapses by France allowed for Rapinoe to earn her brace in another 2-1 win over France in the quarterfinals.

Normally, we’ve seen the USWNT simply roll over the European countries, let alone everyone else, but not anymore, at least in this tournament.

France gave the USWNT everything they got but just couldn’t find the back of the net minus a late header off of a corner. Spain, a debutant in the knockout rounds, played physical with a usually physical and strong USWNT side and kept them tied at 1-1 for a majority of the match until Rapinoe’s second penalty kick.

Their strength through this tournament has been a defensive effort by a backline that has only conceded twice, led by a goalkeeper making her debut in a major international tournament. Crystal Dunn shut down her wing against France and although Alyssa Naeher looked a bit shaky against Spain, she was mostly sharp in the next round against France. She was also barely tested, if at all, during the group stage, if that’s to count for anything.

But while their side of the pitch has pushed the team forward, the attacking side has been sloppy and uninspiring at times.

The USWNT attack has struggled to truly create anything sans the sparse four goals scored between the two knockout matches, and that would make them vulnerable against an English side that hasn’t conceded a goal in the last four matches, riding a 371-minute shutout streak into the semis on Tuesday. They are the best team that the U.S. will face in the tournament.

England manager Phil Neville, the former Manchester United defender, knows that while the USWNT hasn’t been as dominant as they usually are, they’re still a dangerous side.

“America has got that ruthless streak of wanting to win,” Neville said. “You saw the last five minutes of the [quarterfinal] game against France. The game management was fantastic. They took the ball into the corner, they knew what it took to win, and they celebrated like winners.

“That’s what I admire, and that’s what my team has now. It’s about winning.”

The USWNT remain the queens of the women’s game. They are still the best team in the world, but everyone is catching up and the U.S. is becoming vulnerable. Tuesday’s semifinal is far from an automatic win and berth in the Final for the U.S.

But they’ve also responded well in times of adversity during this tournament. They found ways to win when tied 1-1 late against Spain and held strong when France responded late to pull back to 2-1 in the quarterfinals.

Tuesday’s winner plays the winner of Sweden and the Netherlands, who play on Wednesday, in Sunday’s Final.