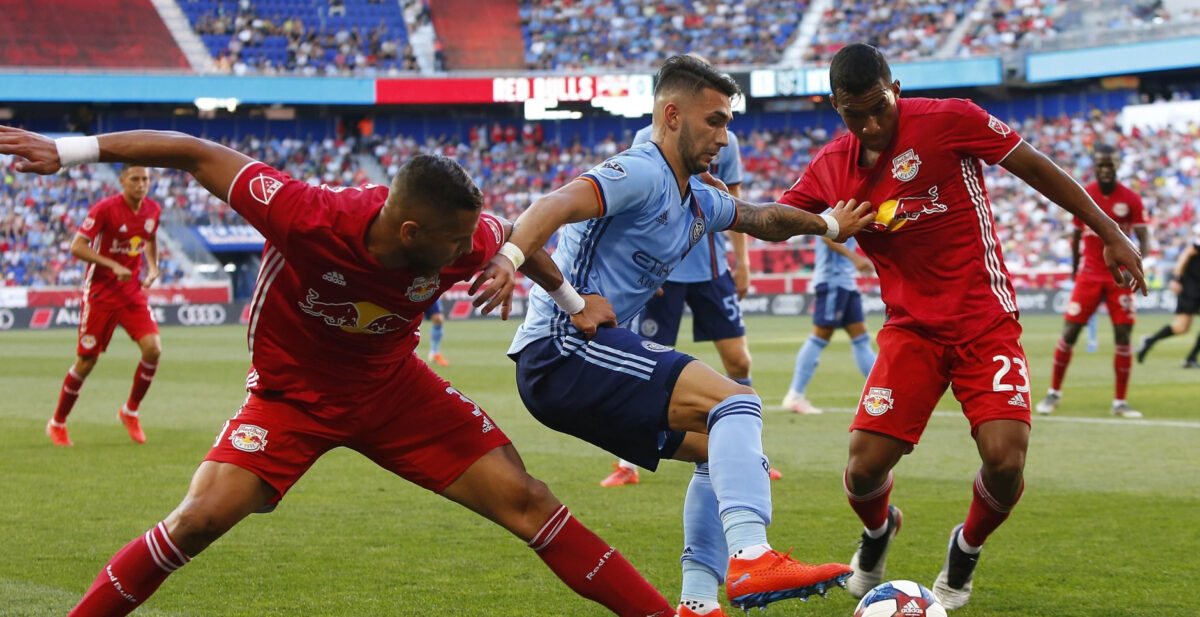 HARRISON, N.J. — The first chapter of this season’s Hudson River Derby went the New York Red Bulls’ way, but not without a good dose of controversy.

The Red Bulls came from behind to defeat arch-rival New York City FC, 2-1, at Red Bull Arena on Sunday evening, but the game’s decisive goal came with plenty of contention. Daniel Royer scored a snap header at the hour-mark, but NYCFC argued with referee Alan Kelly that the goal should not have stood because it came after the Red Bulls started a sequence with a throw-in rather than the corner kick that was initially signaled by linesman Corey Rockwell.

A Red Bulls spokesperson said during the match that PRO’s explanation of the goal was that Kelly made the decision to overrule Rockwell’s call, which allowed the goal to stand.

The Red Bulls moved into third place in the Eastern Conference with the victory, leapfrogging NYCFC in the process.

NYCFC jumped out in front in the early going of the intense affair, with Heber smashing home a cross from Anton Tinnerholm after seven minutes. The Brazilian struck with a one-timed effort that kissed the underside of the crossbar before hitting the back of the net.

The Red Bulls pulled level just before halftime, however, via an immaculate Royer penalty kick. The hosts earned the take from 12 yards out in first-half stoppage time after NYCFC centerback Maxime Chanot was called for a high boot on Brian White.

Royer made no mistake with his ensuing attempt, smashing an unstoppable shot high and to the right.

The veteran midfielder was not done, though. He struck again with his nodded effort after 60 minutes, bagging a brace and lifting the Red Bulls past their rivals in the process.

Royer’s brace helped the Red Bulls down their rivals for the first time this season.

Royer’s second goal was definitely controversial and surely will be argued by NYCFC for the next few days.

Valentin Castellanos was quiet on the night after coming into the derby on a nice run of form.