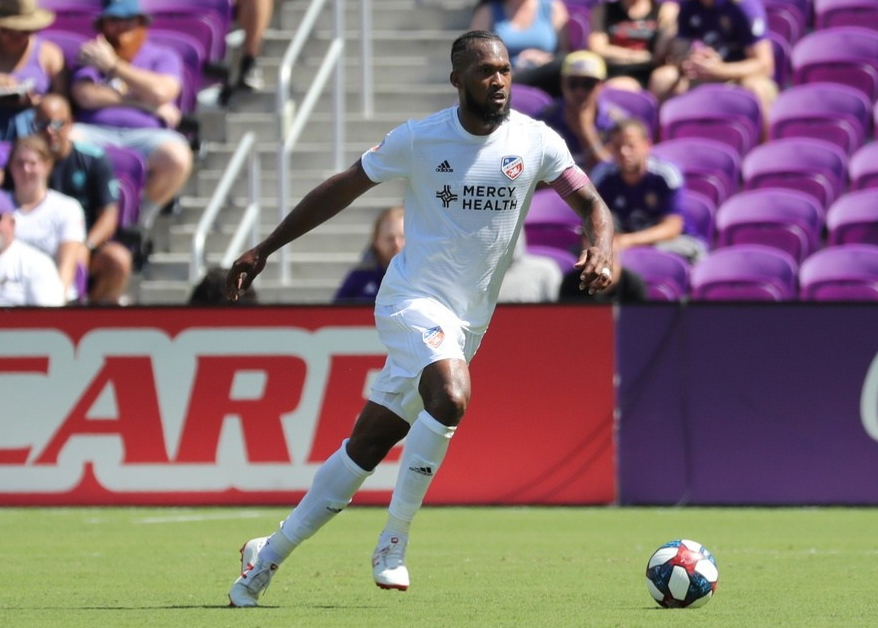 Kendall Waston has been signed to a contract extension by FC Cincinnati.

The club announced the deal on Thursday, after Waston joined the club prior to the start of the 2019 MLS season. Waston, a two-time MLS Best XI selection has started 13 matches for FC Cincy this season, scoring one goal.

“We are pleased that Kendall will remain a FC Cincinnati player for the foreseeable future,” FC Cincinnati general manager Gerard Nijkamp said. “He is a true professional who leads by example on and off the pitch and is committed to what we are building at FC Cincinnati.”

He scored the first MLS goal at Nippert Stadium for FC Cincy in a 3-0 league win over the Portland Timbers back in March. Waston came to Cincinnati after five seasons with the Vancouver Whitecaps and has served as captain.

FC Cincy next travels to the Chicago Fire on July 13th.

A pair of Eastern Conference clubs made a trade on Thursday, swapping forwards at the midpoint of the MLS season.

The Columbus Crew have acquired forward Jordan Hamilton, an international roster spot for the 2019 MLS season, $50,000 in Targeted Allocation Money, and the Right of First Refusal for an unnamed player in a trade with Toronto FC.

Hamilton, 23, has been with TFC since 2014, scoring 11 goals in 53 appearances for the club. He’s also spent time on-loan with the Wilmington Hammerheads and Trofense, totaling five goals in 16 combined appearances. Hamilton has won two caps with the Canadian National Team.

“We’re excited to welcome Jordan to Columbus Crew SC,” Crew SC President and General Manager Tim Bezbatchenko said. ”In Jordan we have a young forward who has not only won trophies at the club level, but who also has experience competing at the international level with Canada and will provide depth in our attack.”

”At the same time, we would like to thank Patrick for his contributions to the Club and to the Columbus community during his time with us. We thought this trade gave us a good chance to improve our roster while also presenting a good opportunity for Patrick. We wish him all the best in the next chapter of his career.”

Mullins, 27, joined the Crew in 2018 but has only scored once in 19 appearances. He’s also spent time with the New England Revolution, NYCFC, and D.C. United, scoring a combined 23 goals in 96 appearances.

“On behalf of Toronto FC, we thank Jordan for everything he has meant to the club. Having come up through our academy, Jordan has been with our club for many years, which made this decision that much more difficult. Ultimately, we believe this decision is best for both Jordan and Toronto FC. We wish Jordan the very best,” Toronto FC General Manager Ali Curtis said.

“We are excited to welcome Patrick to the organization. He is a player that is competitive and has proven the ability to score goals in MLS. He holds the ball well with his back to the goal and he has the ability to combine with central and wide midfielders.”

TFC are currently seventh in the Eastern Conference, while the Crew are six points behind in 11th.

Orlando City also made a move on Thursday, adding a young midfielder in a trade with the Columbus Crew.

The club announced the acquisition of midfielder Robinho from the Crew, in exchange for $50,000 in Targeted Allocation Money. Robinho, 24, joined the Crew this past offseason, and has made 19 regular-season appearances so far.

“We are extremely excited to welcome Robinho to Orlando City. He is a player that is extremely energetic on the pitch and has the ability to create opportunities for players around him,” Orlando City SC EVP of Soccer Operations Luiz Muzzi said. “As we make our push for the playoffs this summer we feel as though Robinho is a great addition to our roster.”

Prior to his move to MLS, Robinho played for several Brazilian teams including Ceara SC, Santa Cruz Futebol Clube, and Itapipoca Esporte Clube.

Orlando City are currently ninth in the Eastern Conference.

After being linked with the club earlier this week, Jose Bizama is officially a Houston Dynamo player.

The club announced they’ve signed Bizama from Huachipato FC of the Chilean Primera Division, using Targeted Allocation Money. Bizama, 25, has won three caps with the Chilean National Team all over the past 14 months.

He made his professional debut with Huachipato back in 2015 and since has totaled more than 100 first-division appearances. In league play, Bizama has made 88 starts and scored five goals while also totaling 21 appearances in the Copa Chile, scoring twice.

“Jose is a player that brings international experience with the Chilean National Team and is a good, versatile player that can play as a right back, central back and defensive midfielder,” Dynamo Head Coach Wilmer Cabrera said. “He will bring a lot of good qualities to the team and provide possibilities to play in different positions. He just turned 25, so we also looked at that as we think and plan for the future of the Houston Dynamo.”

Bizama is now the eighth Dynamo player to occupy an international roster spot.