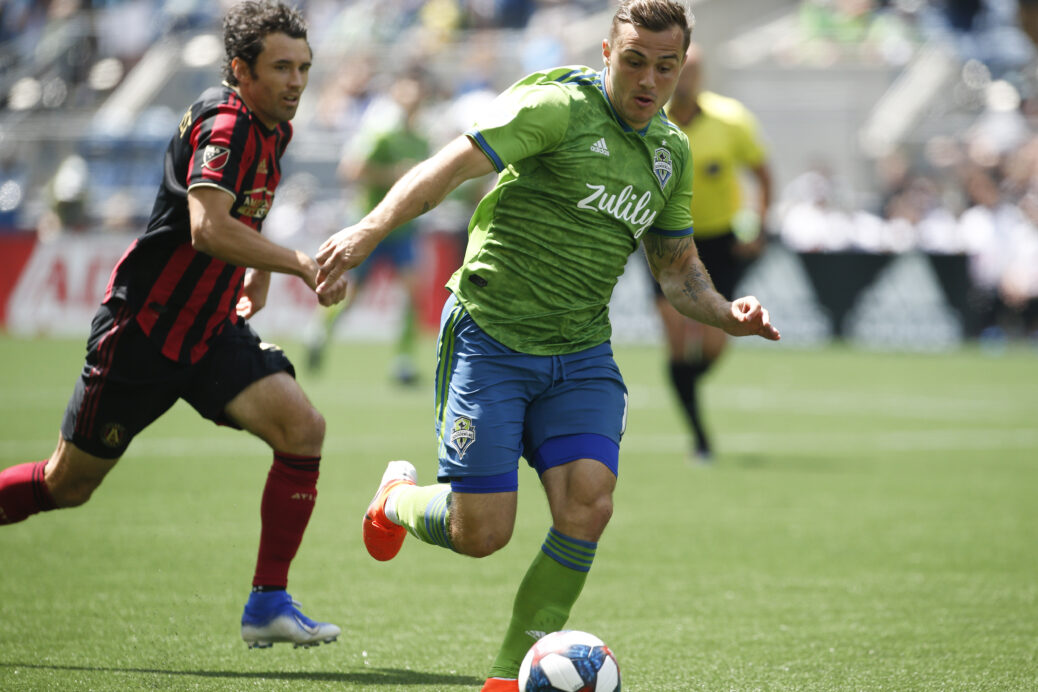 The international break is in the rearview mirror. Only 14 games remain on the schedule. It is that time of year, in Major League Soccer, for contending teams to get serious about contending.

The Seattle Sounders, close to whole for the first time since the season’s opening weeks, looked every bit the part on Sunday afternoon. After topping defending MLS Cup champions Atlanta United 2-1, the Sounders (10-5-5, 35 points) have won three of their last four matches. They sit in second place in the Western Conference entering the home stretch of the season. And they haven’t lost at CenturyLink Field since late September, a 13 game stretch.

The Sounders lost a team-record 10 players to international duty in June. After an unusually healthy start to the season, injuries plagued the club in the weeks leading up to the international break.

But by Sunday, creative midfielder Victor Rodriguez was the only significant name on the Sounders’ injury report. (The 29-year-old Spaniard remains sidelined with a hamstring strain.)

“This was kind of the first game with a lot of guys back,” said Harry Shipp after the match. “So I think for us establishing that winning culture, that winning mentality, with everyone back, is big for us.”

Players returning from international duty played a part in both goals, with Cristian Roldan and Jordan Morris recording assists, and Raul Ruidiaz bagging an instant goal-of the-year candidate, flicking a pass to himself before slotting past goalkeeper Brad Guzan.

“[When] he’s got the ball at his feet in the box,” said Shipp, “you always think there’s a chance he’s gonna score a goal, which is a rare characteristic for guys in any league in the world, so it’s nice to have him back.”

It was the team-leading seventh goal of the season for the 28-year-old Peruvian, who has played just 11 matches so far this year. Since joining the Sounders last summer, he’s scored 17 goals in 25 matches.

Shipp scored the game-winner on a beautiful cross from Morris, freshly returned from a solid Gold Cup stint with the U.S. Men’s National Team.

“You guys all saw what he did with the national team,” said Schmetzer. “We’re going to try make sure he can springboard that experience coming back with us into a productive second half of the year. I believe the kid’s gonna be great. I think he’s a tough kid. He’s overcome a lot of adversity. I’m smiling there because I love having him on the field.”

For his part, Morris credited his improved play with the fact that he has fully accepted the conversion from striker to winger.

“I wanted to be up front,” Morris said about his attitude in past years. “I didn’t enjoy myself out wide. But now I’m really enjoying myself. I consider myself a winger. I’m just embracing the opportunity and whatever role I have on the field.”

It wasn’t a perfect performance, to be sure. Possession in the first half was a struggle, for starters.

“I need guys in the middle of the park to dictate tempo of the game,” said Schmetzer.

Before netting the game-winner, Shipp missed multiple chances to give his team a first-half lead. Josef Martinez equalized, and the visitors as a whole enjoyed too many quality looks at goal.

“I think we cleaned up some messes,” said Schmetzer, “but I’m not sure it was one of our best defensive games.”

These are all eminently correctable issues, and the return of Rodriguez and Joevin Jones (excused from Sunday’s match for the birth of a child) will help in both possession and defense.

If the weekend was the unofficial start of the stretch run, the Seattle Sounders — the team that has run rampant over MLS for the second half of the season for three straight years — once again look poised to have their say in the title chase.