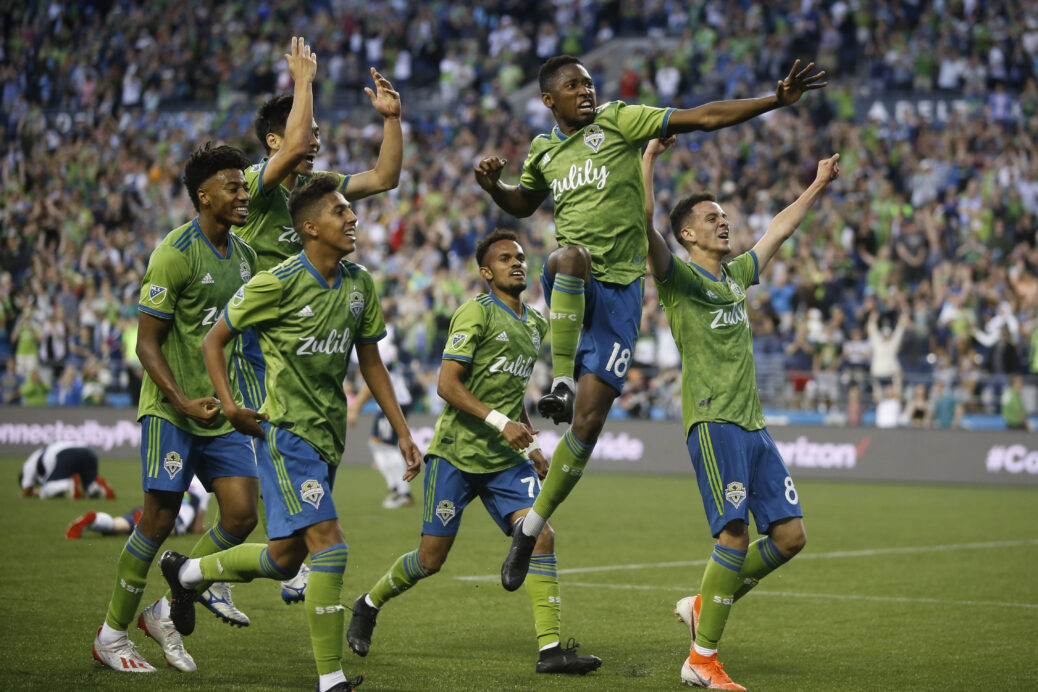 SEATTLE — Did Danny Leyva, a slight teen from Las Vegas not quite two months past his 16th birthday, just signal the start of a new era in Seattle Sounders history? And did he do it with a goal that didn’t even end up counting?

The Sounders have posted the best regular-season record in MLS since exploding onto the scene with a 3-0 trouncing of the New York Red Bulls in 2009. They are, 10 years later, undeniably one of the league’s marquee franchises, with the fans and payroll and trophies and sponsorships to prove it.

So in that sense, a 1-0 home win over a shorthanded Vancouver Whitecaps side playing its third game in eight days shouldn’t really register as an especially noteworthy event in the course of a marathon MLS campaign, not with both sides missing most of their best players to international duty and (in the Sounders’ case) injury.

Except for a couple of things.

First, for all those wins and all those trophies, the Sounders have also suffered their share of late season collapses and midsummer swoons — a 1-9-1 stretch across all competitions in 2015 comes to mind. And to call the start of the last three campaigns “sluggish” would be beyond generous.

Suffice to say, then, that as the Sounders prepared to take on the Vancouver Whitecaps at CenturyLink Field on Saturday night, there was some urgency to put the club’s current three-game slide in the rearview mirror. The aforementioned 2015 slump is the only time the Sounders have lost four league matches in a row.

It took a whopping 96 minutes and 18 shots across a sometimes disheveled yet thoroughly entertaining second half, but the Sounders finally broke a scoreless draw through Kelvin Leerdam as stoppage time drew to a close. The 29-year-old fullback slotted past goalkeeper Zac MacMath (the center of great controversy earlier in the night), salvaging a perhaps vital victory and delighting the 44,049 in attendance. It was the fifth goal of the season for the suddenly goal-dangerous Leerdam, who trails only designated player Raul Ruidiaz (eight goals) for the team lead.

“The ball was on the left side,” said Leerdam. “Brad [Smith] had a combination with Harry [Shipp]. I don’t know if he tried to shoot or pass, but the ball came to me, so I turned to the goal and shot. Simple.”

And so: Losing streak ended, something that matters for a team prone to let slumps snowball into swoons. And something that matters in the league’s new single-elimination playoff format, in which seeding can be the difference between visiting Los Angeles FC and hosting matches at CenturyLink Field, where the Sounders just so happen to be riding a 12-match unbeaten streak that dates back to last September.

The other thing to remember about this match is Danny Leyva. And not just Leyva, but Henry Wingo. Alfonso Ocampo-Chavez. Handwalla Bwana. Nouhou, too.

Since joining the Sounders before the 2015 season, general manager and president of soccer Garth Lagerwey has made clear that his ability to successfully overhaul the club’s youth development system should be considered as central to whatever legacy he leaves in Seattle as any senior-team successes. For five years the organization has poured ever increasing resources into its youth outfits and its USL side, has added Hawaii to its home territory, and has introduced a so-called homestay program that allows players like Leyva to move to Seattle to live with a local family, develop with the Sounders, and earn the right to qualify for homegrown player status.

On Saturday night, the fruits of that effort and those investments were on display in ways not seen before for a club known for fielding veteran lineups (and sometimes simply criticized for being old). The Sounders were missing Nicolas Lodeiro, Raul Ruidiaz, Xavier Arreaga, Jordan Morris, Cristian Roldan, and Roman Torres to international duty. Creative attacking midfielder Victor Rodriguez was unavailable after straining a hamstring in training. It was also the club’s first match since backup striker Will Bruin tore his anterior cruciate ligament in training on June 18.

Brian Schmetzer turned to the kids.

The story of the match, the thing that folks will remember about this Cascadia tilt months and perhaps years from now, was the wonder strike withdrawn, a teenager’s audacious long-range chip over a gaggle of defenders in his debut match, a goal eventually called back by referee Alan Chapman after video review.

On Saturday night, Leyva became the third-youngest player to start an MLS match (trailing only Freddy Adu and Alphonso Davies). An hour into the game he seemed to have scored a goal he might not have even dared imagine until he pulled it off, spotting MacMath laying on the ground after the goalkeeper collided with a Sounder and promptly lifting a chip shot into the night sky that dipped just under the crossbar some 35 yards later.

The crowd, of course, went banana-bonkers. Leyva ran to celebrate with folks in front-row seats. It seemed an impossibly perfect start to the career of one of the more highly-touted prospects in the club’s brief history.

To quote Bull Durham’s Nuke LaLoosh, you could say Danny Leyva announced himself with authority.

After reviewing the play, however, Chapman ruled that MacMath was fouled by forward Justin Dhillon in the collision that the left goalkeeper prone, telling the pool reporter after the match that Dhillon caught MacMath “on the foot with studs in a careless manner.”

The CenturyLink crowd disagreed, lustily booing MacMath at every opportunity over the final half hour.

“I just saw the keeper on the ground,” said Leyva, “so I just said, ‘I’m going to chip it,’ and luckily it went in the net. I was very happy in the moment once I scored. I just ran to the corner to celebrate. Obviously I was happy for 30 seconds until they overruled it, then I was really mad but you have to keep going with the game. The score was still 0-0 and we had to go for the win.”

Sounders head coach Brian Schmetzer wasn’t so sure the goal shouldn’t have counted.

“Obviously I’ll have to see multiple replays,” said Schmetzer after the match. “I only saw the one that we put up on the scoreboard. I don’t know if that’s even legal, but it was up there for everybody to see. But it didn’t look like a foul to me. But again, I’ve always said this: referees have a very difficult job. It’s a tough task and sometimes something that looks like a foul to me might not look like a foul. They have to make decisions. We might agree with them and we might not and we move on. It’s just part of pro sports.”

Third-year homegrown player Henry Wingo, 23 years old and making just the second start of his career, delivered his best performance as a professional, perhaps more willing to assert himself in the absence of pedigreed veterans like Lodeiro, Rodriguez, and Roldan.

“I thought I did really well,” Wingo said after the match. “Provided another option for this team, one I think we have been needing. I thought I got the better of their left back for the majority of the game and created some good chances for us in the first and second half. So I thought it was a good performance for me.”

Fellow homegrown players Handwalla Bwana, 23, and Alfonso Ocampo-Chavez, the latter making his MLS debut at 17, impressed as second-half substitutes. Nouhou, not an academy product but still just 22 in his third year with the club, provided late energy as a substitute while displaying a bit of the discipline going forward required to feature more regularly.

“I thought [Wingo] played well,” said Schmetzer. “I thought Handwalla had a very strong performance off the bench. He did exactly what I asked. And Nouhou, again, was very effective. I mean, his defending is very, very good, and he lit a fire under all of his teammates with his speed and power. So, all three of those young kids, coupled with Danny and Ocampo — and Dhillon’s not that old — it’s a good sign for our club that we can develop some of these kids and they can play significant minutes for us.”

Danny Leyva will have to wait for that debut goal. It almost certainly won’t be as good as the one that was called back on Saturday night. But chalk one up for Garth Lagerwey that VAR can’t take away: The kids are OK.