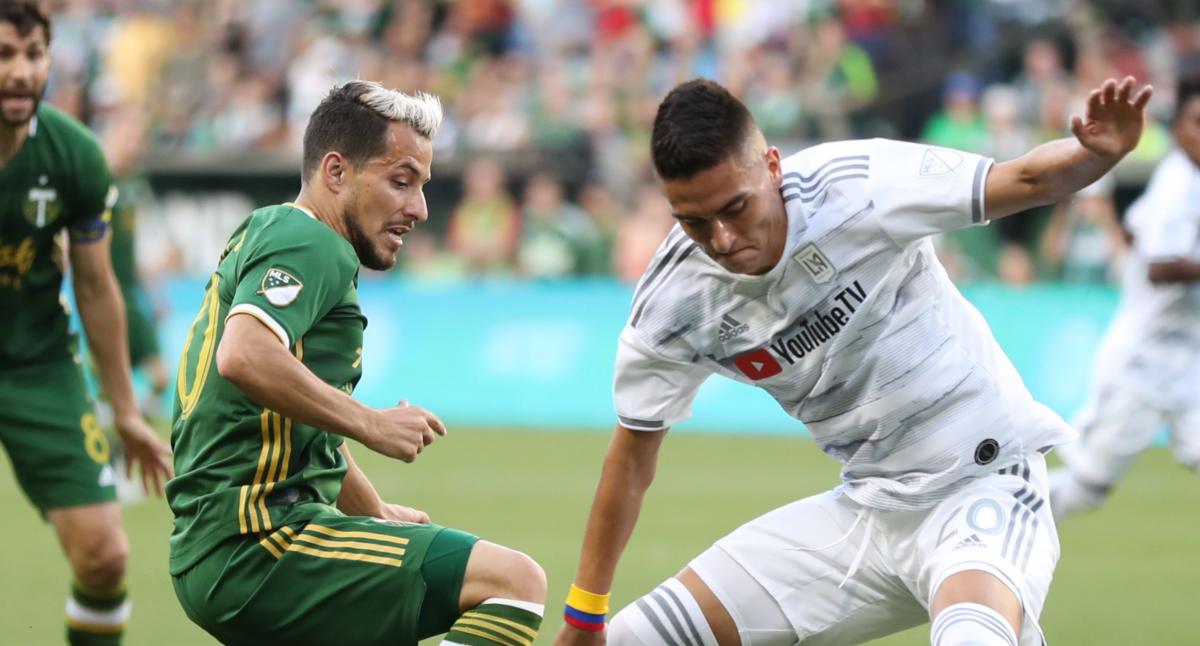 The U.S. Open Cup quarterfinals come full throttle on Wednesday with four winners booking their spots into next month’s semifinals.

The marquee match comes from Banc of California Stadium as LAFC welcomes the Portland Timbers to town. Both sides are coming off impressive league wins last weekend and will look to duplicate the fireworks from their most recent meeting. Carlos Vela and Diego Valeri headline the attacks in this matchup.

A pair of lower-league sides will try to spoil the party as Saint Louis FC and New Mexico United FC face trips to MLS competition. Atlanta United and Minnesota United will be the hosts respectively in those contests, looking to avoid any slipups on home soil.

In the final match, Orlando City returns to Exploria Stadium to face NYCFC with both sides recently playing in MLS action on Sunday.

Here’s a closer look at this week’s top two matches:

Two of the strongest teams remaining in this competition will face off in California on Wednesday night.

LAFC is coming off a 6-1 thrashing of the Vancouver Whitecaps on Saturday. Carlos Vela continued his sensational season while Mark-Anthony Kaye registered a Goal of the Week nominee. Bob Bradley’s side has eliminated a pair of MLS sides already in this competition and will be eager to make it three in front of their home fans.

Giovanni Savarese’s Portland Timbers handed NYCFC their first home loss of the season on Sunday, with Sebastian Blanco playing the hero. The Argentine is one of many offensive weapons for Savarese to call upon on Wednesday, following the likes of Diego Valeri and Brian Fernandez. The trio has 17 goals between them in all competitions and will look to get after the Eddie Segura and Dejan Jakovic.

A possible upset is on the cards at Allianz Field as New Mexico United takes on Minnesota United away from home.

New Mexico has made it back-to-back upset wins over Colorado and FC Dallas respectively, but will face a tougher test in the host Loons. Kevaughn Frater has three goals so far in the Open Cup and will look to be lively against a Loons backline that has been pretty consistent.

Adrian Heath’s side rose to fourth in MLS’ Western Conference standings after a pair of wins over a four day span. The return of Kevin Molino has helped in production (one goal, two assists) over that span while Mason Toye stepped up big time in the absence of Darwin Quintero. Toye registered a brace in a 3-2 win over the Montreal Impact and could get the nod again on Wednesday.

It was an up-and-down week for the defending MLS Cup champs after picking up only one point in a four-day span.

A 5-1 loss to the Chicago Fire was followed up by a 3-3 dramatic draw against the New York Red Bulls. Josef Martinez returned for Atlanta United and scored a brace, while Justin Meram made the most of a start on the wing. Newly-acquired loanee Emerson Hyndman is reportedly going to start for the Five Stripes in his first appearance since coming over from AFC Bournemouth.

Saint Louis FC will have a tough task, but will aim for a fifth-consecutive victory. Wins over the Fire and FC Cincinnati put the USL side in this position and they will rely on numerous players who can find the back of the net. Sam Fink scored the winning goal against FC Cincy and has even chipped in one in league play against North Carolina FC.

The second of two All-MLS showdowns come from Exploria Stadium with both teams coming off Sunday league matches.

Orlando City fought to earn a point in Chester on Sunday, in a 2-2 draw with the Philadelphia Union. Nani came off the bench and made an impact with an assist, while Santiago Patino scored his first MLS goal. Chris Mueller and Nani could get the start after coming off the bench against the Union, while Sacha Kljestan and Robin Jansson return from suspension.

NYCFC fell 1-0 to the Timbers and is also coming in on short rest. Out of their six Open Cup goals so far, Keaton Parks leads the way with two while four others have one apiece.