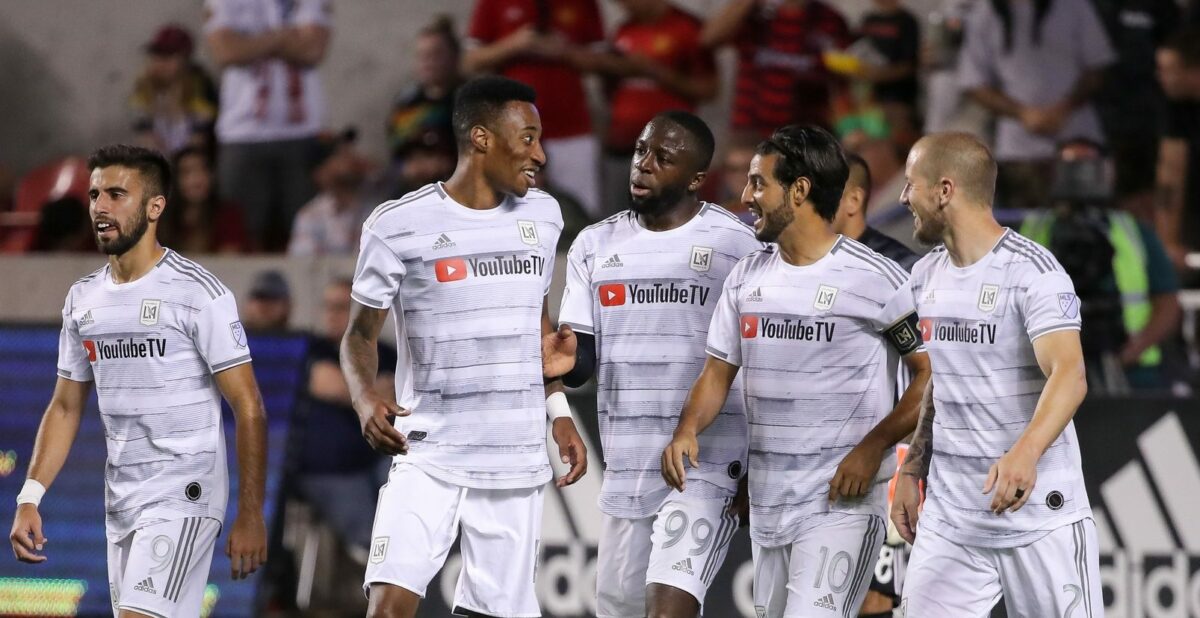 Elsewhere, the Seattle Sounders left Dignity Health Sports Park with a point after a 2-2 draw with the L.A. Galaxy. The Chicago Fire held off the Philadelphia Union for a 2-0 home win, Sporting KC downed the San Jose Earthquakes at home, and the Vancouver Whitecaps knocked off D.C. United in Canada.

Gustavo Bou hit back for the Revs in the second-half to earn his side a share of the spoils in Harrison. His right-footed shit in the 65th minute leveled the match with Carles Gil chipping in the assist on the goal.

Marc Rzatkowsk’s long-range strike broke the deadlock in the 18th minute, the only effort that beat Revs goalkeeper Matt Turner on the evening.

Turner made nine saves in a Man of the Match performance which helped the Revs to their second-consecutive draw.

Valentin Castellanos and Heber each scored braces in the process to give NYCFC their second win of the month. However, it was the visitors who held a first-half lead.

Allan Cruz got on the end of Andrew Gutman’s cross in the 30th minute to give Ron Jans’ side a lead, but it only lasted two minutes. Castellanos’ first of the night came in fine fashion as he scored from long-range.

Maxi Moralez missed a penalty kick in the 36th minute, but Heber’s right-footed finish sprung NYCFC in front ahead of halftime. Castellanos’ header in the 71st minute extended the visitors lead ahead of Heber’s second goal of the night to further pad the lead.

NYCFC are in third while FC Cincy remain bottom of the East.

Toronto FC used a late equalizer from veteran forward Jozy Altidore to steal a point from the Columbus Crew.

Altidore’s late finish helped Greg Vanney’s side avoid a disappointing defeat in Columbus. Jonathan Osorio’s first-half goal had TFC up at the break, but the Crew would hit back twice after halftime.

Pedro Santos’ ninth league goal of the season leveled things three minutes into the second-half. David Accam looked to have given the Crew a late win at home after scoring in the 82nd minute, but Altidore had the final say for the visitors.

Auro’s cross found the head of Altidore in the 90th minute to end it 2-2 at Mafpre Stadium.

FC Dallas scored three unanswered goals in the second-half at Stade Saputo to leave with a point after a 3-3 draw against Montreal.

Lassi Lappalainen registered a first-half brace and Orji Okwonkwo extended the Impact’s lead in the 56th minute, but Dallas would have the final say.

Zdenek Ondrasek started the comeback three minutes later with his first goal for the club. Reto Ziegler’s penalty kick finish in the 85th minute continued the momentum for Dallas before Ryan Hollingshead headed in Michael Barrios’ cross before stoppage time.

It was a meltdown for the Impact who remain in seventh place in the East. Dallas are eighth in the West.

The Chicago Fire picked up their third league win of August with a 2-0 success over the Philadelphia Union at home. Nemanja Nikolic scored his first brace since May 9th in the process to help the hosts to a needed three points in their quest for the playoffs.

The Hungarian’s first goal came in the 38th minute as he finished from close-range after Przemyslaw Frankowski’s cross reached him. Aurelien Collin fouled C.J. Sapong in the box five minutes later, allowing Nikolic to convert his second of the night, this time from the penalty spot.

Nico Gaitan was sent off before halftime for the Fire, but it wouldn’t help the Union to any second-half comeback. Sapong hit the bar two minutes into the second-half, but the Fire needed no insurance to leave with three points.

The Union had 18 shots in total, but only recorded three of those on target in the loss.

Minnesota United used a late penalty kick equalizer to steal a point in a 1-1 draw with Orlando City.

The bulk of the action came in the final 20 minutes, starting with the Lions taking the lead. Nani scored his ninth league goal, slotting home from the penalty spot after winning a penalty against Ike Opara.

Substitute forward Abu Danladi’s 92nd minute finish was enough to give Adrian Heath’s side a point at Allianz Field. The Loons remain in second in the West while Orlando are eighth in the East.

Sporting KC ended a two-match losing run in league play with a 2-1 win over the San Jose Earthquakes at home.

Peter Vermes’ side scored a pair of second-half goals to cancel out a first-half finish from veteran Chris Wondolowski. Wondolowski’s header in the 25th minute put Matias Almeyda’s side ahead, but the visitors eventually conceded a pair.

Benny Feilhaber’s long-range strike in the 50th minute leveled the score at Children’s Mercy Park. After Johnny Russell hit the right post with a free kick, Graham Smith followed up the play to score his first MLS goal.

Despite 25 shots in total, the Quakes had to settle for second best on the evening.

San Jose are sixth in the West while SKC are 10th.

In the first match since Wilmer Cabrera’s firing, the Houston Dynamo came back from two goals down to tie the Colorado Rapids 2-2 at BBVA Compass Stadium.

Mauro Manotas scored a brace in a five-minute span late in the second-half to cancel out Diego Rubio’s first-half pair for the Rapids.

The Chilean’s first goal came after seven minutes with a right-footed finish before doubling his tally on the day in the 38th. Another finish with his right foot doubled the visitors lead heading into halftime.

Manotas picked up a through ball from Adam Lundkvist in the 74th minute and beat Tim Howard to start a late surge from the hosts. The Colombian netted his 11th league goal five minutes later to give the Dynamo something positive to take from the match.

The Seattle Sounders picked up their second draw of the month, tying the L.A. Galaxy 2-2 on the road.

Despite a brace from Zlatan Ibrahimovic, the Sounders used an own goal from Galaxy defender Jorgen Skjelvik to leave L.A. with a point.

Daniel Steres was sent off after six minutes for the Galaxy after being given a straight red card.

The Sounders took advantage as Raul Ruidiaz gave the Sounders a lead in the 42nd minute. Ibrahimovic’s first goal of the night leveled things before halftime, heading Sebastian Lletget’s cross into the top corner.

The Galaxy took the lead in the 65th minute as Ibrahimovic scored from the penalty spot after the Swedish forward won the spot kick.

A needed win looked to be nearing the Galaxy’s grasp, but an own goal by Skjelvik gave the Sounders a point at the death.

The Galaxy are in third while the Sounders are in fifth and a point behind.

Both teams were reduced to ten men after the halftime break. Walker Zimmerman picked up a second yellow card in the 48th minute while Aaron Herrera was sent off for a straight red card after fouling Carlos Vela inside of the box.

Vela slotted home the ensuing penalty kick to give LAFC a 1-0 advantage.

Adama Diomande iced the win for LAFC in the 82nd minute, capping off a fast break by finishing Lee Nguyen’s assist.

The Vancouver Whitecaps picked up their second win out of the past three league matches after a 1-0 success over D.C. United.

Yordy Reyna’s long-range shot in the 18th minute put the hosts in front and one that was stand as the game-winning goal.

Reyna struck the crossbar in the 60th minute which would’ve given the Caps some insurance. Luciano Acosta hit the right post in the 86th minute for D.C., who only recorded two shots on goal out of 24 in total.

D.C. sit fourth in the East while Vancouver are bottom in the West.