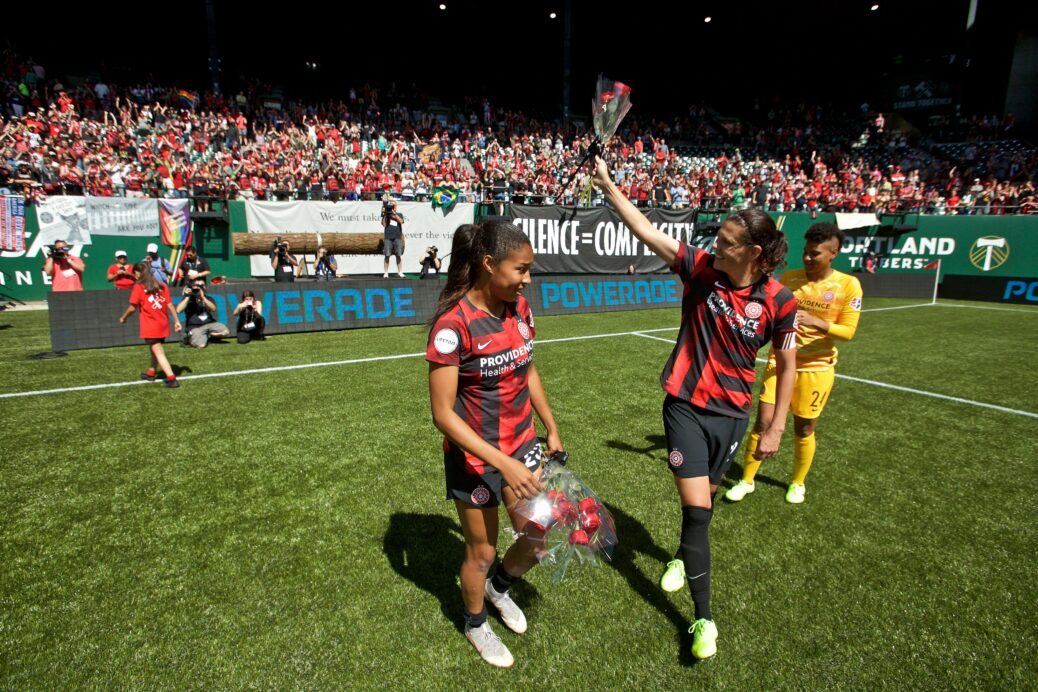 Four tilts over the weekend capped off a busy week in the National Women’s Soccer League. As the teams head towards the playoffs, the table continues to tighten up.

The Portland Thorns picked up their third win in a row on Sunday with a 3-0 win over Chicago Red Stars. They now own a five-point lead in the league table.

After falling out of its playoff position last week, things continue to look worse for Reign FC who fell to North Carolina Courage on the road. The occasion marks three straight without a win for Reign, who are desperately awaiting the return of Megan Rapinoe.

Almost 20,000 strong were on hand at Audi Field in Washington D.C. on Saturday night to see Washington Spirit make the most of a late go-ahead goal against Orlando Pride.

Star striker Carli Lloyd’s first-half brace was all Sky Blue FC needed to pick up a road win in Houston, but the team sits well out of the playoff picture.

It took a while, but Courage found it late. Building from the back, Jessica McDonald and Crystal Dunn fought through traffic to set Lynn Williams up with a one-timer opportunity with Reign keeper Casey Murphy out of the equation.

The win also serves as a bounce back after the seam suffered defeat to Lyon in the International Women’s Cup final last week.

Back in the playoff conversation, Washington Spirit will be feeling rejuvenated after a win Audi Field. They’ll find themselves only three points off Utah Royals.

Crystal Thomas opened up the scoring by taking advantage of a lapse of concentration by Pride keeper Ashlyn Harris who lost control of the ball in the six-yard box.

Brazilian superstar Marta would even things up in the 31st minute though. She finished off a chance created by Rachel Hill, who fought through traffic and teed up the close-range opportunity.

Ashley Hatch would get the final say just before the hour mark though, the scoring ended after she finished with a headed shot from a set-piece.

In the 26th minute, she found herself wide open and behind Houston Dash keeper Jane Campbell. Jen Hoy founder from the near-post side for a tap-in.

Just before halftime, she’d strike again. From the break, Raquel Rodríguez found Lloyd in space and she took Campbell on from close range. The goal is good for her second of the evening and fourth of the season.

Houston would wait too long to make it interesting. In extra time, Kealia Ohai knocked in a powerful strike from distance.

The result still has Sky Blue out of reach for a postseason appearance for the moment.

Providence Park continues to be friendly confines for the Thorns, who’ve maintained a 6-1-2 line at home this season.

Things got going early when Tobin Heath found Christine Sinclair at point-blank for a goal in the 12th minute. The strike was good for her ninth of the season.

A pair of goals from Midge Purce would see out the victory. In the 24th minute, she cleaned up a ricochet and headed the ball into an empty net. She finished the performance once again cleaning up the scraps, but finished with her feet this time.