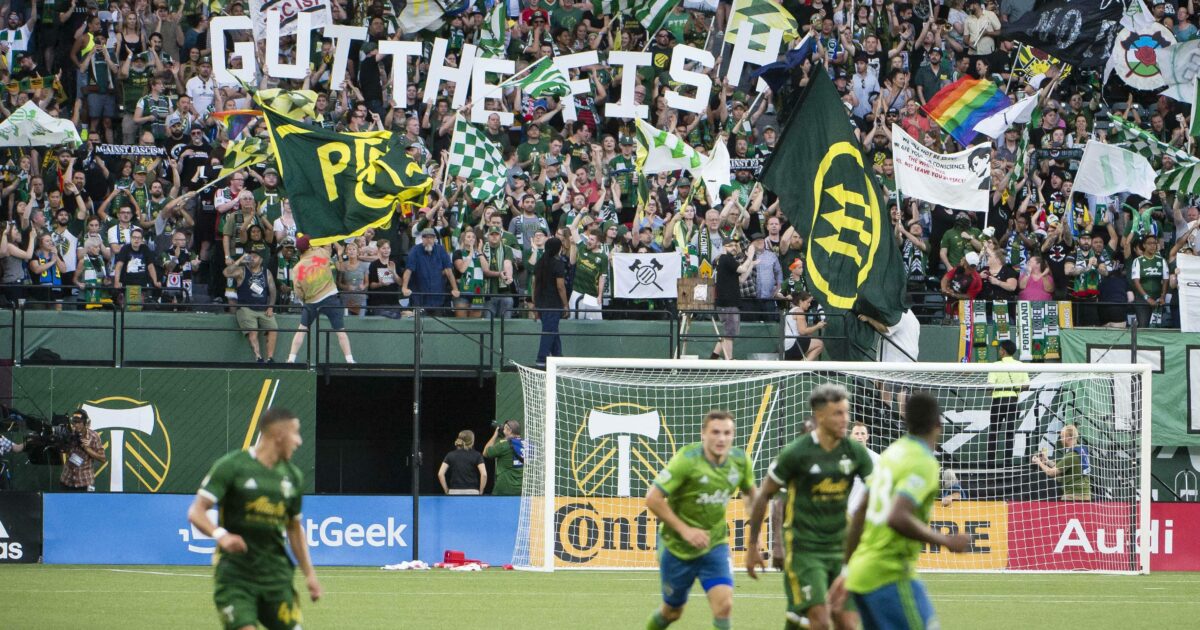 The Portland Timbers and Seattle Sounders have a heated rivalry that extends through the decades and through several incarnations of both clubs. Every match between them falls into the “must-see TV” category since there will always be two sets of players going all out with an electric atmosphere all around them.

Friday night’s 2-1 Sounders win will go down into the annals of this rivalry’s history for an entirely different reason, however.

Sure, Jordan Morris had a stellar game that included a pair of wonderful setups for both of Seattle’s goals. The Sounders’ defense stood tall in the face of a late Portland onslaught to hold onto the win, and that’s something to be commended.

On the other side, Portland’s defending wasn’t good enough early on and they struggled to find the right final pass as forward Brian Fernandez was just as quiet as the normally boisterous Timbers Army.

The real memories from Friday night match came from off the pitch. The atmosphere in the stands wasn’t what anyone was used to as both sets of supporters were silent for the first 33 minutes of the match. Their lack of noise was in protest of Major League Soccer’s fan code of conduct banning certain political imagery, including the logo of the Iron Front, an anti-fascist organization in Germany that disbanded in 1933.

It created a strange atmosphere for any MLS game, let alone one of the fiercest rivalries American soccer has ever seen. Sounders goalkeeper Stefan Frei said the lack of noise didn’t bother him or anyone else on the pitch.

“For us, honestly once the whistle blows you’re so consumed with the game, you’re so switched on,” Frei said after the match. “I mean, I’ve played in front of 70,000 people and it doesn’t make a big difference. I think obviously there’s moments in the game when you feel the pressure and then maybe opponents fans add a tiny bit of pressure on top of that, but switching on from it being almost no noise I think for us players didn’t make a big difference because we know our fans support us. We support them that they’re taking a stand. I don’t know how it looked on the TV, but I hope it had an impact.”

ESPN wasn’t shy about showing what went on in the crowd. As soon as the clock struck 33 minutes, the television feed cut right to a vast array of Iron Front banners and other anti-fascist, anti-racist displays. The noise was at its usual peak for the rest of the match.

Frei may not have paid much attention to the silence during the match, but he did speak out in support of the fans and their quest to be allowed to speak their minds afterwards.

“I knew about it before,” he said when asked about the Timbers Army and Emerald City supporters protest. “I commend ECS and Timbers Army. I think the fact that we have two supporters groups that hate each other come together on an issue, that says a lot about what the issue is, that there’s something there that really needs to be discussed.”

“This a big draw to these games, the atmosphere and emotions. I think they got their point across, I hope.”

Sounders head coach Brian Schmetzer was also asked about the backdrop of the match, although he was more supportive of the league and clubs stance on the display of the Iron Front symbol.

“They need to be complimented on their stance,” Schmetzer said. “I get it, it’s a free country. They can do what they do. But I know that this club is against racism and against fascism. I know that. I believe that with everything that I do. So that little bit of support that we’re trying to show to find some middle ground between the fans that are upset and angry. I believe that we can erase some of that stuff that’s out there in the world and I was proud of the guys to do that little ceremony before the thing and that’s what I’m going to say about that.”

On the other side of the field, the Timbers didn’t want to talk much about what happened in the stands. They were more focussed on the game itself and how their finishing and defending wasn’t good enough to win a big game.

The one reaction came from defender Zarek Valentin, who entered the stadium wearing a Timbers Army/Iron Front t-shirt.

“I’ve been in this club for four years now and I know the ideals of the Army and of the team very well — and they align,” Valentin said. “It’s tough as a player because at times we get caught in the crossfire. The front office and the (Timbers Army) are aligned in their thoughts. That’s the bottom line, and I look forward to a seeing a resolution as quickly as possible for the league.”