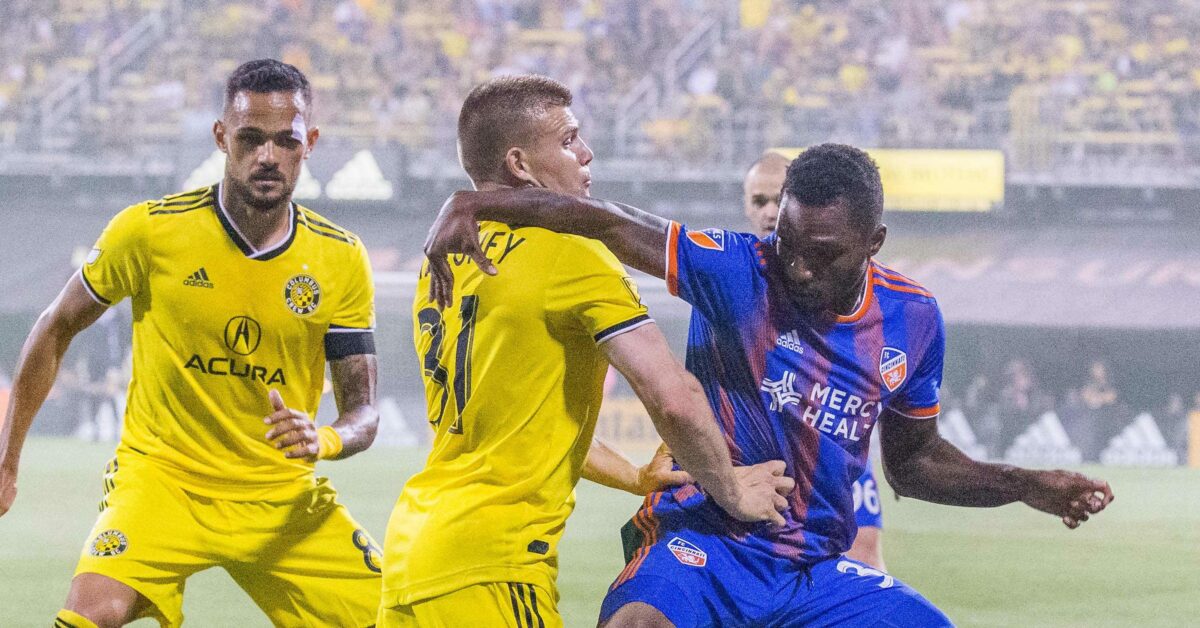 COLUMBUS – Though it wasn’t the first time in history Columbus Crew and FC Cincinnati clashed, Saturday night at MAPFRE Stadium was the first-ever meeting with MLS points on the line, and Crew fans will be left frustrated.

The game ended 2-2, and lived up to the billing of “Hell is Real” as the Crew had to fight back from being down 2-0 within the first 24 minutes. By the end, they left Cincy desperately clinging to a point after coming up empty-handed on a late barrage of chances.

“It was the loudest game I’ve been a part of here as the head coach of the Crew and the supporters made me very proud,” Caleb Porter said.

“I had goosebumps before the whistle blew, just looking at the crowd.”

While the sold-out crowd at MAPFRE was treated to four goals, Columbus fans were certain that a fifth was coming after Columbus turned the table in the second half.

“I was ready to celebrate three or four times, to be honest.” Porter said.

After knocking on the door with seemingly every possession, Pedro Santos finally found the Crew’s equalizer in the 62nd minute, stylishly from distance and all Cincinnati could do was hope to hang onto its first point in four weeks.

Things boiled over in the final moments of the game after a pair of close 90th-minute chances from the Crew strengthened the feeling that the go-ahead goal was imminent.

A total of eight minutes were added on after Cincy’s Victor Ulloa and Allan Cruz were carded for egregious challenges on the same play to stop a late David Accam breakaway. The ensuing shakeout stopped play long enough to evoke frustration from the Crew’s sideline.

“Disappointing. It’s a part of our sport that I don’t love, it can just kill a game. That’s a professional foul, both of them. He’s in on a breakaway, and you know David Accam when he’s running with the ball one-on-one, he’s going to create something.” Porter said.

Further drama in the final moments, as Cincinnati’s Caleb Stanko nearly got charged with a handball from the ensuing free-kick attempt.

“In my view, it was going to be a very good chance and I didn’t like where the ball was set. They set it on the first foul instead of ten yards up on the second foul, and obviously, I thought the last one was a handball as well. But it is what it is.”

Despite being the unhappier team in the draw, the occasion highlighted what’s to come in MLS’ newest grudge match and Porter was happy to play his part.

“For anybody who was at the game, to see the battle, to see the intensity, to see four goals, I know they’re going to be coming back after this game,” He said.

“It was a very entertaining game. I think it was a good showcase for the sport and it’s great to have this rivalry.”

Still without a win in the all-time series, Columbus will only have to wait 15 days to take another shot at the MLS newcomers. The sides will square off again on August 25th at Nippert Stadium in Cincinnati.