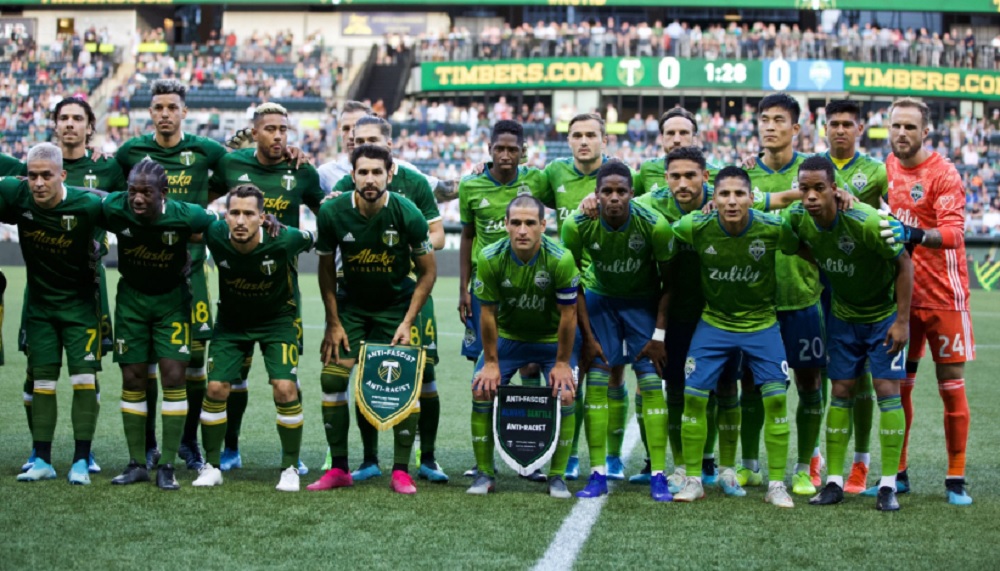 The Portland Timbers and Seattle Sounders are two of the fiercest rivals in MLS, but supporters of both sides came together for something before Friday night’s match at Providence Park.

The Timbers Army, the Emerald City Supporters, and Gorilla FC agreed to a silent protest at Friday night’s match as they continue to speak out against Major League Soccer’s “no political statements” policy.

Our statement on activities at tonight's match in PDX. #AUnitedFront pic.twitter.com/BJ0MP2qkOi

The Supporters Groups are calling for MLS to amend their fan code of conduct to remove the ban on political messaging, saying the word “political” is inherently arbitrary and that the policy hasn’t been equally enforced.

Fans on both sides of this rivalry, and throughout the rest of the league, have been removed from MLS stadiums for displaying the logo of the Iron Front, an anti-fascist movement that originated in Germany and disbanded in 1933, as well as banners that speak against fascism and racism.

The logo has been called out by MLS as being specifically banned as being too political and in violation of the league’s fan code of conduct, which came into enforcement before this season.

The Timbers clarified their stance on the display of the logo last week in a statement that still allows fans the freedom to display anti-fascist and anti-racist messages, but without the Iron Front logo.

“Major League Soccer believes the Iron Front symbol is inherently political because it has been co-opted by antifa. The solution that allows for specific denouncement of fascism on banners (as well as continued acceptance of personal apparel choices), in lieu of the Iron Front symbol, is more than fair. It clearly allows for those wanting to decry fascism at games to do so. Some rooted in this issue simply focus on the Iron Front banner ban as censorship and others look at it as an opportunity for protest. We believe if you step back and understand the issue, we are on very firm and equitable ground that achieves the desired approach to clearly denounce fascism. And the risk of a slippery slope of more prohibited expression is not a course we will allow. We didn’t make the rule banning the Iron Front on signs but we understand it and support it.”

Players on both Portland and Seattle came together to show the clubs stand against fascism and racism before the match as well. Both starting elevens posing for a photo with banners reading “Anti-Fascist, Anti-Racist.”

As for the protest in the stands, both sets of supporters didn’t engage in any organized chanting for the first 33 minutes of Friday night’s game. The lack of noise was noticeable in the normally boisterous Providence Park. A few faint chants attempted to get started, but none of them ever caught on and the only crowd noise was gasps and slight cheers at close plays.

An unusual amount of on-field chatter from players and coaches was also audible on the ESPN broadcast.

As the protest period came to an end. the fans counted down the final seconds leading to the 33 minute mark and, as it struck, the stadium erupted in its usual sea of banners, flags, and song. The first chant from the Timbers Army was a Timbers version  of “Bella Ciao,” an Italian anti-fascist anthem.

The Timbers’ ban on Iron Front imagery didn’t stop supporters from displaying the symbol. Several flags and banners bearing the logo were waved by supporters of both clubs as soon as the clock struck 33 minutes.