NWSL Playoff Preview: Courage knocking on the door of history, can anyone stop them? 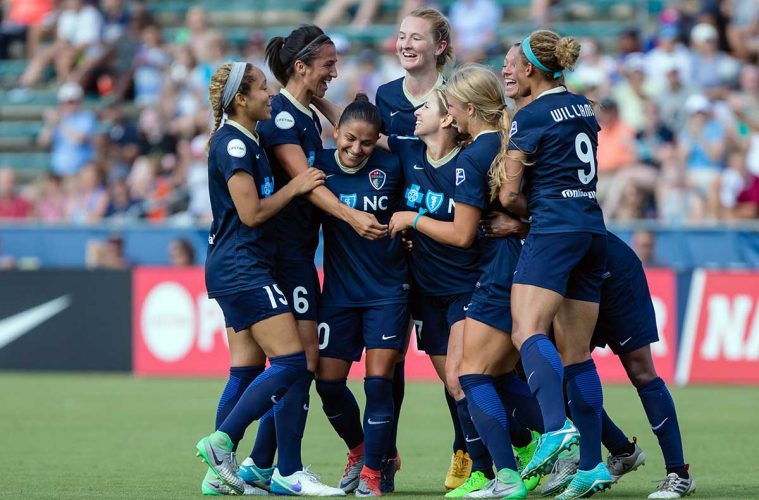 The 2019 National Women’s Soccer League playoff opens on Sunday with four teams in action. The same four teams from 2018 will feature, and the North Carolina Courage will be the only one hoping for the same result.

While the Courage has already earned its third-straight Supporters’ Shield, it’ll be looking to take its second-straight NWSL Championship on home turf as the finals will play out next week at Sahlen’s Stadium in Cary, North Carolina.

Megan Rapinoe and Reign FC will stand in Courage’s way though, and Sunday’s matchup should see sparks fly as Reign managed to sneak into the playoffs in the second-to-last week of the regular season.

On the other side of the bracket, Julie Ertz and the Chicago Red Stars will play host to Tobin Heath and the Portland Thorns. After a hot start turned into a midseason slump, Chicago ended its 2019 campaign in style, eliminating Utah Royals from the playoff race on its way to a five-game winning streak.

However, the last time they fell, it was to Portland Thorns. While the Thorns didn’t exactly stick the landing to the 2019 season, the campaign was consistent and their playoff status was never in doubt, but after losing to North Carolina in the last two NWSL finals, the postseason reputation is at risk.

From a historical point-of-view, North Carolina is knocking on the door of becoming the winningest team in NWSL history. Sharing two championships with Portland Thorns and the now-folded Kansas City FC, the stage is set for the Courage to make history and if the regular season was any indication, the odds will be in their favor.

Here is a breakdown of the NWSL semi-final matchups:

SEASON SERIES: North Carolina: 2-0-1. Despite earning the 2-1 victory back in May, Reign went on to fall to the Courage to the tune of 2-0 and 1-0 in July and August, respectively.

MATCH-UP TO WATCH– Debhina vs. Allie Long. Simply put, Debhina is the Courage’s most versatile weapon. Hanging up there with the league’s best in goals and assists, and with so many weapons to look towards for finishing, Reign will need to find a way to break it up. This season has seen Long fall into a deep, holding role with Reign and her World Cup-winning experience will be Reign’s best shot at neutralizing North Carolina’s biggest threat.

OUTLOOK: So far, 2019 has belonged to the Courage and they’ll be playing to finish it off at their home stadium, should they pass the test. The dominance over the regular season, plus Reign sneaking into the playoffs at the end, looks like an equation that will see the Courage pass the test.

There’s a case for Reign though. The World Cup rake saw its superstars Megan Rapinoe and Allie Long miss significant time, and the six-game victory tour occupied them both during NWSL play as well. If the miles and minutes haven’t fatigued them too much, there’s world-class ability in both, and this is a one-game scenario where risks will be taken.

SEASON SERIES: Portland: 2-1-0. The teams drew 4-4 in their first matchup in April, but Portland went on to beat Chicago 3-0 on two separate occasions afterward.

MATCH-UP TO WATCH– Kerr, Nagasato vs Portland’s backline. The Chicago duo put up a whopping 26 of the team’s 41 goals in the regular season. Kerr lead the league in goals, and in addition to being tied for fourth-most goals scored, Nagasato led the league in assists. The Thorns’ backline will be tested with keeping both out of the net, and away from each other too.

OUTLOOK: Given the Red Stars’ inability to snag a win in the season series, you’d figure Portland to be the odds-on favorite and hold tough. The Thorns have quality, depth, and an even 4-4-4 line on the road in 2019.

However, the more times you face a hungry opponent, the more likely it is that they’ll eventually catch up. Chicago certainly has the pieces in place to do just that. Too, there’s been a city-wide effort to pack the stands at SeatGeek Stadium in the buildup to the match in hopes home-field advantage will play a part.