DUSSELDORF, Germany — Walk into the Merkur-Spiel Arena for a match these days and you might notice an extremely calm and composed figure standing in goal for the home side. One that does not celebrate or show any emotion after making a big penalty kick stop, and one that does not seem to get angered or rattled regardless of the circumstances.

That figure is Zack Steffen, and in a matter of just a few years he has gone from struggling fledgling professional to a more established player enjoying arguably the best form of his young career.

The German Bundesliga is less than two months old, but Steffen has gotten off to a flying start with some impressive performances. The 24-year-old goalkeeper has been named to the league’s Team of the Week twice through its first six match-days, and looks to be going through a seamless transition with Fortuna Dusseldorf

His promising start starkly contrasts how things went for Steffen when he attempted to ply his trade in Germany four years ago with SC Freiburg, but he is a different person now and a different player.

“I think everything has changed, especially my mentality,” said Steffen following this past weekend’s 2-1 loss to, coincidentally enough, Freiburg. “I’m four years older, five years older. Everything off the field has changed. Not everything on the field, but just learning myself, learning the process, confidence, self-confidence and all that I’d say.

“I’m older, I’m more mature, I understand the way the soccer world works a little bit more now that I’m older. I kind of knew from my time at Freiburg what to expect when I was coming over here.”

What Steffen, who is at Dusseldorf on a season-long loan from Manchester City, knew to expect was a faster-paced and higher level of soccer than he was used to in MLS. The up-and-comer had evolved into one of the North American league’s standout netminders since joining the Columbus Crew in summer 2016, but this, as he had experienced during his 18-month stint with Freiburg, would be a step up. Especially if he wanted to be an every-game starter and maintain his spot as the U.S. Men’s National Team’s No. 1 choice in net.

Steffen was also aware that there would be challenges off the field. His last go-around in Germany left him feeling incredibly homesick and the language proved difficult to learn. He is still in the process of working on the latter challenge, but has had some help dealing with the former.

“I have my sister over here living with me, which is really nice, and that kind of keeps the homesickness away and the loneliness away,” said the 6-foot-3 Steffen. “That is really all it is. You’re coming over to a different country, you’re six hours ahead of everything you know back home, but it’s also a great city with really nice people and the team’s great. They’ve been really supportive.”

“For sure, I was definitely lonely at times (while at Freiburg) and I felt like I was in a whole other world from my family and friends and I was young. I’d say Dusseldorf is a little bit more of an uptempo type of than Freiburg, so I like where I’m at right now.”

The American is equally as pleased with his form thus far. He has started each of Dusseldorf’s six games this season and has by and large shone brightly. Most recently, he stopped a potential go-ahead penalty in the second half of this past Sunday’s match by getting a good jump on the take and swallowing the ball.

His immediate reaction was to quickly get up, survey his options, and punt the ball to a teammate upfield — never once showing emotion and staying noticeably calm and collected despite the home crowd going into a frenzy and chanting “For-tun-a!”

“My sisters and siblings took all the craziness,” said Steffen.

Dusseldorf still went on to lose the match vs. Freiburg, via a remarkable individual effort, but Steffen once again looked more like a poised veteran goalkeeper rather than blossoming youngster.

“For sure, yeah,” said Steffen when asked if this is the best run of form he has had in his five-year career. “I feel stable and consistent and I just want to keep it going and keep working hard.”

There is also hard work to be done in the international game. Steffen is part of a USMNT that is still going through a learning process with new head coach Gregg Berhalter, whom Steffen played under in Columbus, but the growing pains thus far have been evident. 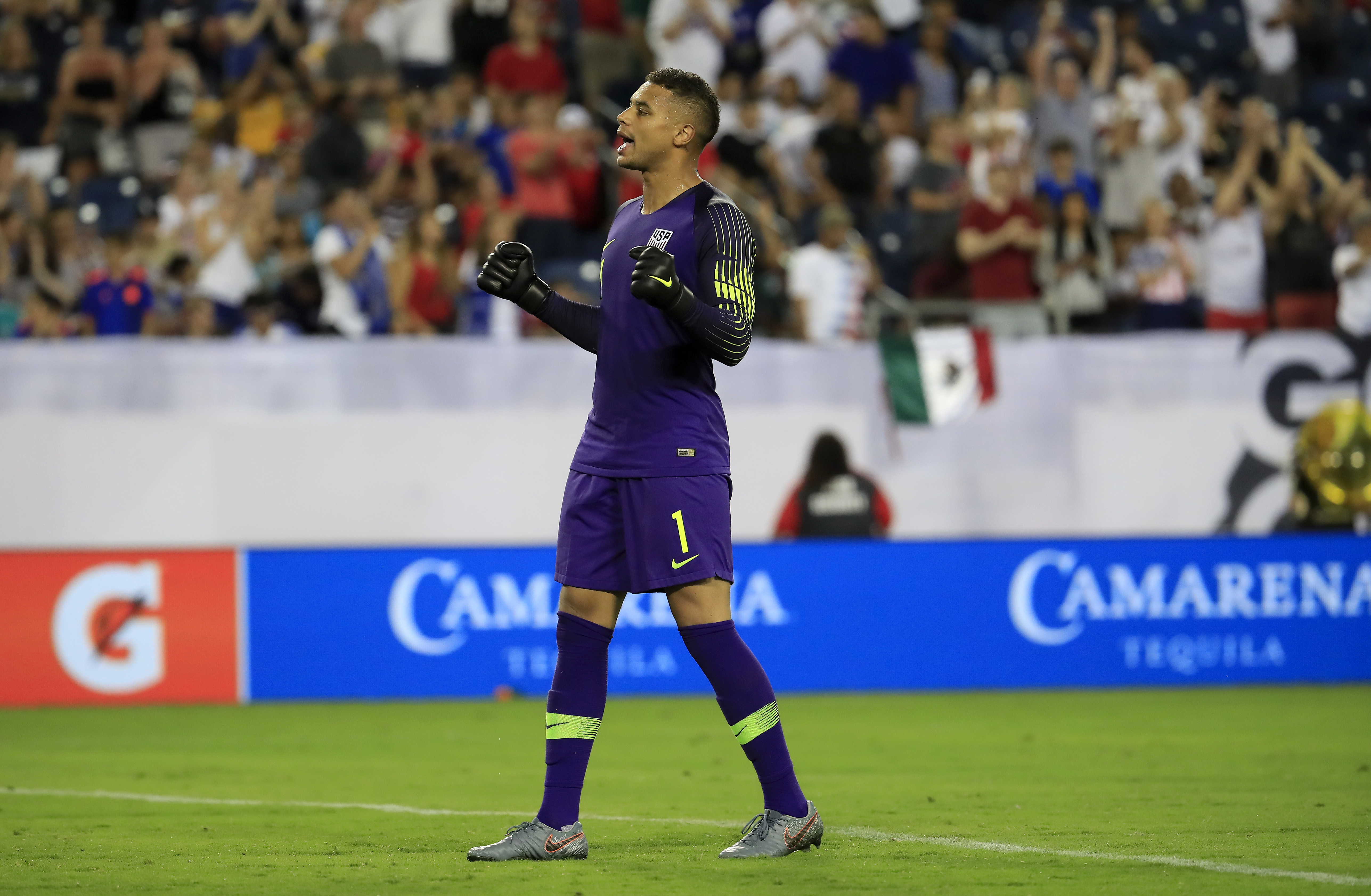 Last month’s friendlies only seemed to underline that, as the USMNT played Uruguay to a 1-1 draw but also lost to Mexico, 3-0. The defeat was the more talked about result, as the Americans were routed by their rivals. What’s more, Steffen made a major mistake on one play in attempting to implement the build out of the back style that Berhalter is seeking.

“I think it’s obviously a tough system but it’s a good system,” said Steffen. “I think we (as players) try and force it too much, instead of kind of just playing with our instincts, and when you do that, that’s kind of when you get in trouble.

“I think we’ve just got to find the balance when to play football and then when to be smart and instinctual and kind of play in their half.”

If there is one thing that Steffen has learned in his early days as a pro, it is finding a way to get things done. He is hoping that ends up being the case for both the USMNT and himself at the club level, given that he has desires to play for Manchester City.

Whether that ultimately ends up being the case remains to be seen, but Steffen may give himself a shot if he continues to build on his hot start to the season.

“I think the Bundesliga is a great league where young players can develop and get a lot of games,” said Steffen. “We’ve seen it before with many other players, and I hope to be one of them.”