Everything comes up aces for Sounders in first home final 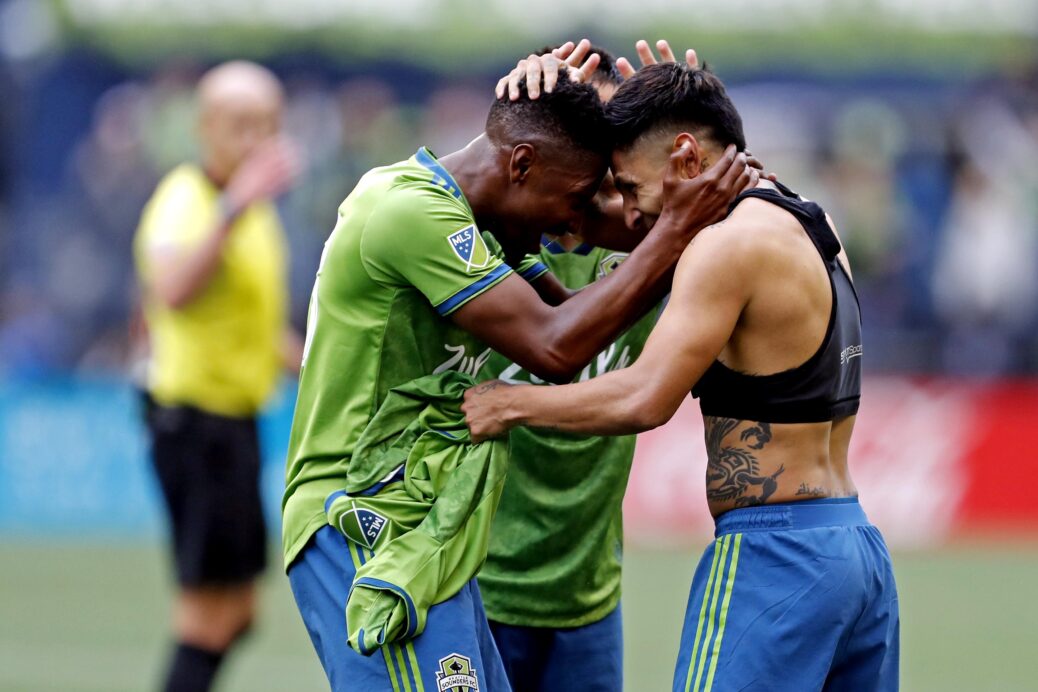 And now with some home cooking.

The 3-1 victory over visiting Toronto FC on Sunday afternoon in the final match of the 2019 MLS calendar was no easy thing, a difficult season begetting a fittingly difficult finale. The visitors were arguably the better side throughout the first half — even had the hosts on the ropes at times. But for the second time in three MLS Cup meetings between these teams, the Sounders found a way to end up hoisting a trophy.

It was the rubber match between two powerhouse franchises that also faced each other in the 2016 and 2017 MLS Cups, both played in Toronto. The Sounders won the first on a penalty-kick shootout, while Toronto won 2-0 in 2017. Few would dispute that the Canadian side largely outplayed the Sounders in both matches.

This time, south of the border, was supposed to be different. Yet it wasn’t all that different, not for some 60 minutes that saw the visitors boss possession deep in the Sounders’ half of the pitch.

But a club that has learned a thing or two about perseverance over more than a decade of Open Cup, Supporters’ Shield, CONCACAF, and MLS Cup successes never lost its composure or its grit. Time and again center backs Kim Kee-Hee and Roman Torres stymied Toronto’s attack, snuffed out fires before they even arose.

“They’ve been unbelievable this whole postseason,” midfielder Cristian Roldan said after the match. “They didn’t risk anything in the back. And that’s really important in the playoffs, right? If you don’t make a mistake, you’re still gonna be in the game. Toronto really took it to us, and the fact that we didn’t make a mistake led us to this victory.”

A goal from right back Kelvin Leerdam opened the scoring in the 57th minute for the hosts.

The lead permitted a record-setting crowd license to express itself, and the visitors never seemed up for a response. Second-half substitute Victor Rodriguez bagged a beauty of a goal in the 76th minute, the first moment of attacking class in the whole match. Designated player Raul Ruidiaz added another in the 90th minute, tracking down a 60-yard pass from Gustav Svensson before striking on the counter to put the Sounders up 3-0.

Late substitute Jozy Altidore pulled one back for the visitors in the 93rd minute with a sharp header, but the final whistle blew moments later.

The Sounders are now 12-0-0 in their last 12 home playoff matches. They have also won nine of 12 matches overall since August 23.

It was everything the Sounders could have ever wanted, an MLS Cup victory in downtown Seattle before a crowd of 69,273 — the largest crowd to attend a sporting event at CenturyLink Field, also home to the NFL’s Seattle Seahawks.

“It’s a dream come true,” said Sounders goalkeeper Stefan Frei. “I got a little teary-eyed, not so much for winning the trophy, but for winning it at home with our fans, and having that positivity, that joyous moment that you can share with everybody. Because, yes, we’re always well supported. We had such an amazing time in Toronto when we won in 2016. But to be able to do it at home, and let them enjoy it, is I think probably the best gift that we can give. And they so deserve it.”

Svensson, again rugged and relentless, again intelligent and enterprising, has talked in the last week about hating to lose more than he loves winning. It was a topic he revisited in a beer-soaked locker room on Sunday.

“It’s the way we play,” he said. “We are willing to do everything we can to not lose. And then we have the quality to score goals. I think that’s how we are. We are a tough team, we are tough players, a lot of players giving everything and fighting for each other. That’s why I love them, all of them. It’s just a joy to play with them.”

Sounders head coach Brian Schmetzer, born-and-raised in Seattle, choked up when discussing what the victory meant to him.

“Most importantly, most importantly,” he said, “the players and the fans deserve this. The players persevered, because, again, it was a first half where we needed to make some adjustments. And they never quit. And the fans never stopped believing. So I’m very, very, happy and proud of the city and the fans.”