A closer look at the next possible MLS expansion markets

BROOKLYN, N.Y. — MLS will stand at 30 teams in just about two years’ time.

It will probably continue to grow shortly thereafter.

MLS awarded its 30th franchise on Tuesday, giving Charlotte an expansion side that will begin play in 2021 alongside Austin FC. Teams in St. Louis and Sacramento will join the year after, further growing the national footprint of the league, which will look like this when the league reaches 30 teams: 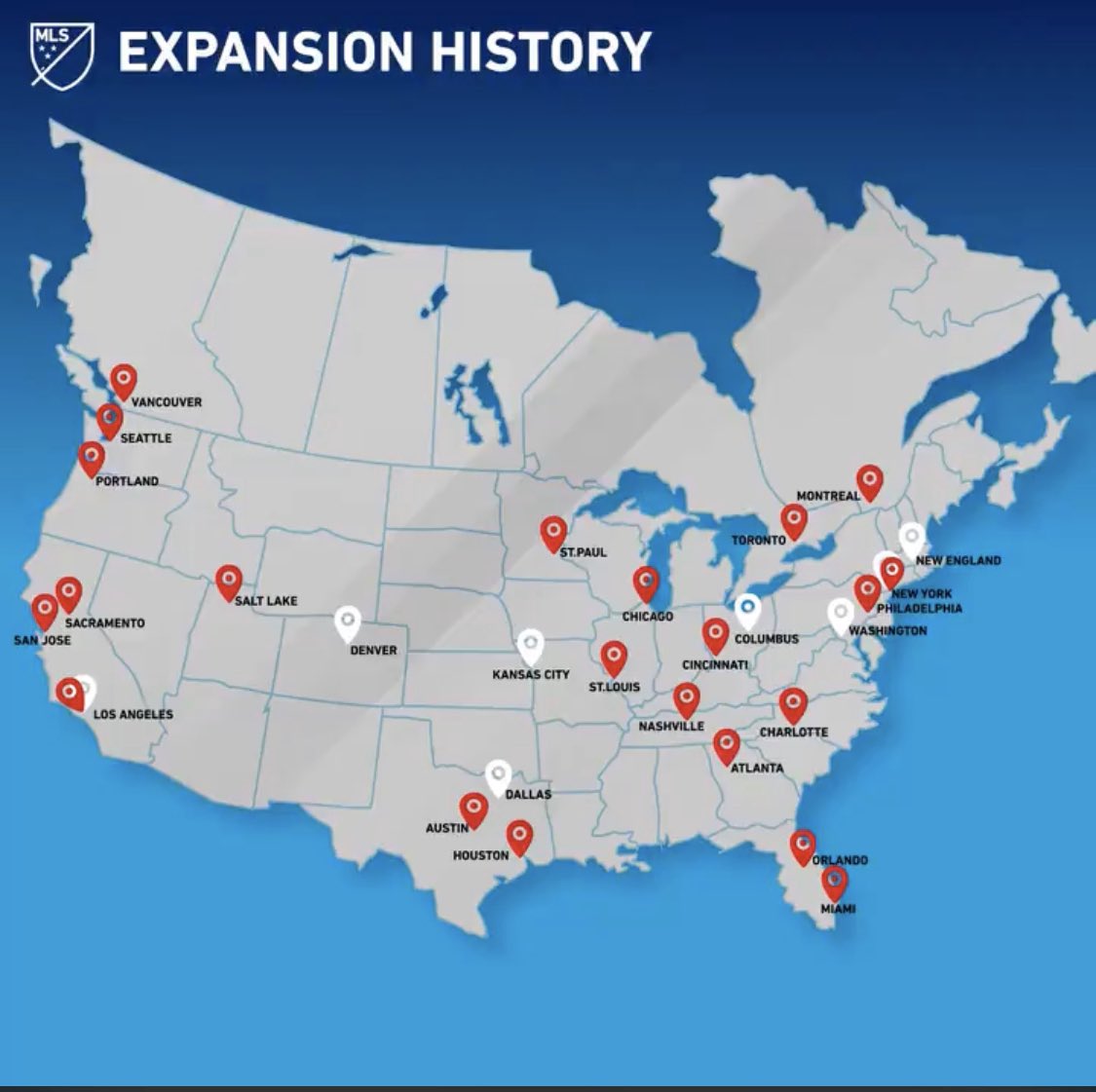 MLS commissioner Don Garber stated on Tuesday that Charlotte was “likely the last expansion team” but likely is the key word. Investors across the nation continue to line up willing to pay increasing expansion fees, and that does not figure to stop any time soon.

MLS knew it was heading to Charlotte at that point, so why continue discussions with two other markets if expansion is “likely” to stop? Surely because the league does not intend to stop. Not when there are more prospective owners out there ready to cough up a pretty penny to gain entry into the league.

“It might go to 32. We’re not ruling that out,” said Garber two weeks ago. “We have never said that we’re going to 32 teams. I don’t even think it’s a likelihood. Why would we make any comments about what the future might look like?

Anyone who has closely followed MLS expansion during the past decade has heard Garber issue similar statements on multiple occasions, and yet the league has continued to grow at a dizzying pace.

So for an exercise, let’s choose to believe will continue to expand and in even numbers.

Here are the candidates SBI thinks are most likely to land the next two expansion sides in order of probability:

Just looking at the national footprint of the league in the map above, there is a sizable gap between the west coast and Texas that MLS surely wants to fill in the same way it just did with Charlotte in the southeast. Recently named by Garber as one of two cities MLS is still in conversations with, Las Vegas can help fill that void.

In fact, the city is still moving ahead with its discussions to potentially grant approval to build a 25,000-seat, soccer-specific stadium despite Charlotte’s entry into MLS.

“The city remains in negotiations with the Renaissance Companies to build a new MLS stadium at the Cashman site and bring an MLS franchise to Las Vegas,” a city spokesman said in a statement Wednesday.

The Las Vegas Lights of the USL are currently the only pro soccer team in town, but owner Brett Lashbrook has agreed to sell the club if and when the time comes for a move up the food chain. That MLS and Liga MX chose Sin City as the site for the inaugural Leagues Cup final earlier this year also does not seem like a coincidence and something that certainly bodes in Las Vegas’ favor.

The other team Garber recently said MLS is still talking to, Phoenix is another prime candidate to help fill that aforementioned empty space out west. Phoenix can also give the state of Arizona a first division soccer team to rally around much in the mold of Charlotte in the Carolinas.

Another thing that helps Phoenix’s cause is that it is the 12th-largest media market in the United States. The ownership group of USL side Phoenix Rising has some cache in the shape of former striker Didier Drogba, and has had meetings at MLS HQ in New York City as recently as earlier this year.

What’s more, the group has previously laid out plans to build a 21,000-seat stadium that will cost an estimated $250 million. Construction for the venue is said to be privately financed.

An MLS expansion team may already have been given to Detroit were it not for a change of plans in regards to its stadium. A previous bid for the midwest city initially included building a soccer-specific stadium before gears were shifted towards a focus on NFL dome Ford Field, a move that ultimately played a part in Detroit losing out to Nashville and Cincinnati during the last round of expansion.

As evidenced by Charlotte’s entry and Atlanta United’s success, MLS does not seem to care much anymore about having teams play in NFL stadiums long term. If that is truly the case, Detroit’s bid should strengthen. The city might not be in a part of the country that MLS badly needs to fill, but it still holds plenty of value as the 14th-biggest market in the nation.

Another midwest city, Indianapolis is probably a very distant fourth here. That said, it can help fill a small bit of vacant space between the two current MLS teams in Ohio and and the one in Chicago. USL club Indy Eleven has also worked on its MLS expansion bid this year, so the hopes are still alive even if slim.