Atlanta United underwent some major changes after winning MLS Cup in 2018, with Tata Martino and Miguel Almiron moving on and Frank DeBoer and Pity Martinez arriving to take their places.

An even more dramatic makeover has taken place in Atlanta this past winter, as the Five Stripes said goodbye to a quintet of key figures from the MLS Cup-winning side of 2018. Darlington Nagbe, Julian Gressel, Leandro Gonzalez Pirez, Hector Villalba and Michael Parkhurst all bid farewell in an exodus that has left the Atlanta fanbase a bit nervous about the turnover.

For DeBoer, the roster transformation is the natural process a team must undergo, and it’s a process he believes could help Atlanta United be even stronger in 2020.

“Fresh faces brings new energy in the locker room and I think that’s always very important,” DeBoer told SBI. “Sometimes when people stay too long it gets like they’re going on automatic pilot.

“Now, new ones want to prove themselves, the other ones who still are here, they think ‘Hey, what’s going on right now’, so they will also be, I think, much more active,” DeBoer said. “I think it’s good to every three or four years to have some fresh faces in the locker room.”

DeBoer heads into 2020 with some momentum as coach, a far cry from where he stood in his early days in Atlanta, when the team struggled to adapt to life after Tata Martino. DeBoer eventually helped Atlanta United hit its stride in the second half of 2019.

Josef Martinez will once again lead the attack in 2020, though Gressel’s departure leaves Martinez without his key source for service. Brooks Lennon has arrived from Real Salt Lake to help fill the void left by Gressel’s move to D.C. United, while playmakers Pity Martinez and Ezequiel Barco will look to keep the Venezuelan striker stocked with scoring chances.

Nagbe’s departure leaves a gigantic hole in the Atlanta midfield but DeBoer is hoping the void can be filled by committee, with Emerson Hyndman and new arrival Matheus Rossetto expected to play vital roles as they try to make up for Nagbe’s missing influence.

Despite the handful of high-profile departures, an argument can be made that this is the deepest Atlanta United roster to date. Veterans like Fernando Meza, Brooks Lennon, Edgar Castillo, Anton Walkes, Adam Jahn and Jake Mulraney were brought in to offer DeBoer multiple options all over the field, and the kind of squad depth that should help the Five Stripes contend in multiple competitions. 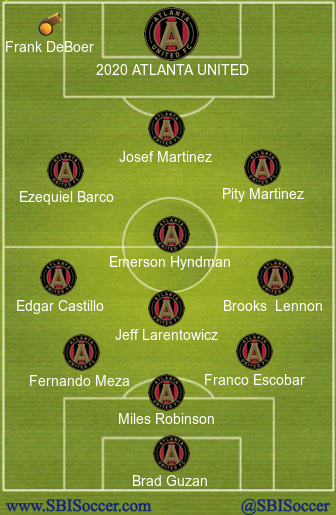 The Argentinian defender replaces Leandro Gonzalez Pirez, who was a mainstay in the Atlanta United defense. Meza isn’t as physically-imposing as Gonzalez Pirez, but is a seasoned veteran who should provide more consistency, a better passer and better complement in central defense to Miles Robinson.

“He’s very good 1-v-1, isn’t afraid to push forward, is good on the ball,” Guzan said of Meza. “He’s able to be physical when when needed in terms of balls in the air, tackles, able to go to ground and things like that.

“Although Leandro obviously was a big part of our team, Fernando has stepped in and we’ve been able to fit him in seamlessly without missing a beat so that part’s been really good.”

While Meza will be crucial to Atlanta’s defense being a stable unit, the newcomer who could wind up having the biggest impact is Matheus Rossetto. The Brazilian central midfielder should push his way into a starting role eventually, and will help bring some needed dynamism to the middle of the field.

The 23-year-old midfielder arrived in Atlanta last summer and almost immediately became a regular contributor in midfield. There will be much higher expectations in 2020 after his loan turned into a permanent move that will make him one of the higher-paid players on the team, and a player who will try to help fill the void left by Darlington Nagbe’s departure.

“He’s someone that’s that’s very good on the ball individually, someone that’s confident on the ball can pick a pass can can be a box to box midfielder,”  Guzan said of Hyndman. “I think he’s matured, certainly from last year to this year and again somebody now that we look to to take on a little bit more responsibility, especially in the in the middle of the pitch.”

The 2019 season had the makings of something special for Atlanta United after securing a U.S. Open Cup title and Campeones Cup to add to the trophy case, but a surprise loss to Toronto FC in the Eastern Conference final was a bitter pill for an Atlanta United side that had hit a good run of form in the second half of the season.

“I think we played our best football and then you lose against Toronto FC in the (conference final),” DeBoer said. “I still have a bitter of taste of that, you know, that’s, it was a really long time to get out of my head, get out my system. I think, really, we deserved to win that game. We let a very big opportunity to be two-time champions get away.

“Of course, we have to blame ourselves. We had to take our opportunities,” DeBoer said. “At the end of the year we can look back at a nice year, where we won two prizes, but in the end you always think about what you didn’t win, especially when you feel like you could have won it.”

If Atlanta United is going to be in the MLS Cup conversation again, it will need some new faces to assimilate quickly. Brooks Lennon has the capability of playing as a winger, wingback or right back, and will be tasked with trying to replace Gressel’s productivity.

Hyndman and Matheus Rossetto will be the leading candidates to try and replace Nagbe’s presence in midfield, and while finding someone who can keep the ball like Nagbe will be extremely difficult, DeBoer sees the possibility of Nagbe’s replacements being able to provide more attacking production than Nagbe, who managed just two goals and seven assists in two seasons in Atlanta.

Pity Martinez is back for his second season in Atlanta, and after enduring a difficult start to his time with the Five Stripes, he finished the 2019 season showing more of the quality expected from him when he first signed a year ago.

The enigmatic playmaker has turned heads in preseason with a more vocal presence, and the look of a player ready to have a big season. 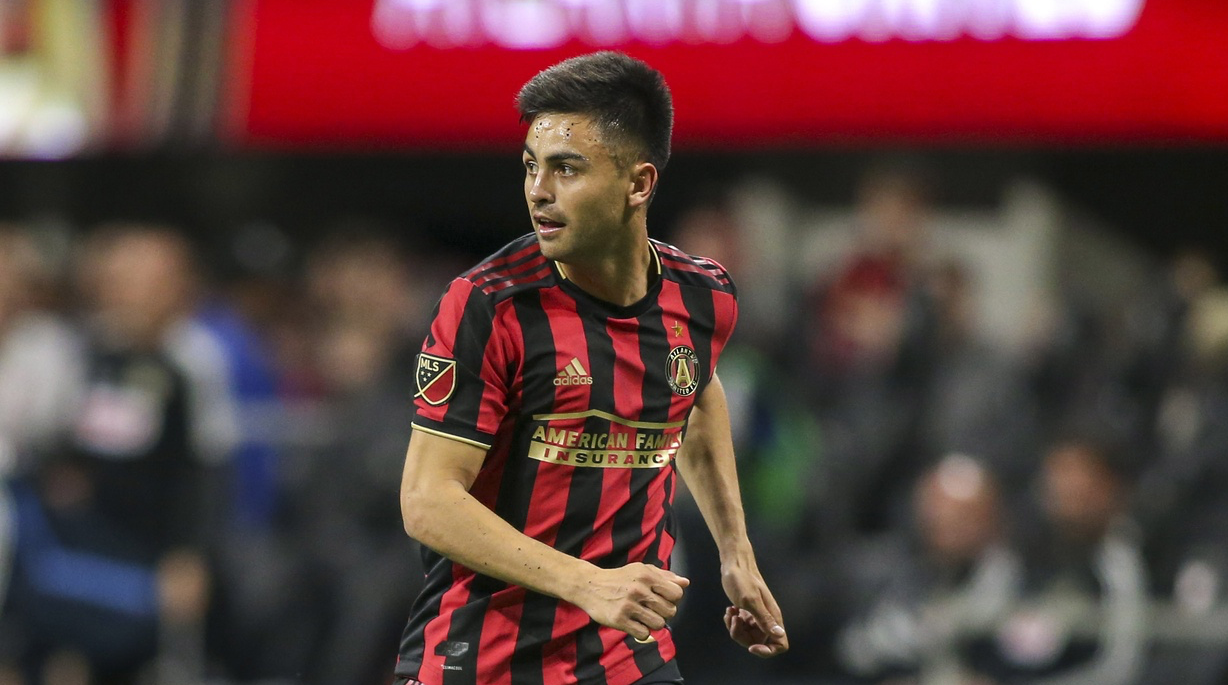 “What I see right now in preseason he’s really up for it,” DeBoer said of Pity Martinez. “He’s motivated. He’s talking to young players and I think he’s happy and of course, you know, what I see from him makes me very happy. To see him getting involved in the team process.”

Defensively, Miles Robinson will be looking to build on his breakout 2019 season, and he will have more of a leadership role to fill after Parkhurst’s retirement and the departure of Gonzalez Pirez.

“As a defender he’s one of the best in the U.S., no doubt about it,” DeBoer said of Robinson. “His passing skills, I think he still can improve in that. I think he already made major steps in that and that’s why I have a lot of confidence in him.”

Left back remains a question mark, with veteran Edgar Castillo brought in and youngster George Bello poised to rebound after an injury-hit 2019. DeBoer should continue to deploy both four-man and five-man back-lines, and the return of the versatile Anton Walkes coupled with additions of some players capable of playing as wingbacks, like Lennon, Castillo and Mulraney, should give Atlanta even more tactical flexibility.

Atlanta United heads into 2020 as one of the favorites to win MLS Cup, but the team’s roster overhaul leaves a cloud of uncertainty about whether the Five Stripes can maintain or exceed the high standard they set last year, or if some personnel decisions are going to doom them to take a step back.

“We want to be better, of course, than last season and hopefully I think when everybody’s here, we have the possibility to do better than last year,” DeBoer told SBI. “Not only with results but also what we see on the field. Pity has one year behind him right now. Meza is, I think a very good player. Matheus Rossetto I think can be spectacular in midfield. Emerson (Hyndman) knows the league now.

“I think we still can have a really good team and because we are now longer together, I think we can do better than last season.”