For the first time in a very long time, the Colorado Rapids are capable of being in a win-now mode.

The question entering the 2020 campaign is if they can actually win, now.

The Rapids’ roller-coaster type of season saw the club struggle out of the gate, going winless in their first 11 matches. They also went one-and-done in the U.S. Open Cup, losing to USL Championship side New Mexico United in penalties.

The club saw three different head coaches overall in 2019, starting with Anthony Hudson and ending with Robin Fraser coming to the club in August and getting the Rapids back on track, winning five of the last seven matches. Although the push was too little, too late, however, the light at the end of the tunnel could finally be seen.

“We finished the season feeling pretty good about what we’ve done toward the end,” Fraser explained to SBI. “I think there was a hunger and everyone thought that there was unfinished business as a result.

“I think people looked at the offseason differently as a result of that. Everyone came in really hungry and excited to go.”

The Rapids’ strong finish to 2019 has brought a strong sense of hope entering 2020 and with that, expectations of their first playoff appearance since 2016.

But to get back to the playoffs, Fraser has preached one particular thing since he arrived in late August, and is doubling down on it this preseason: the theme of cohesiveness.

“I think for us to be a good team, we have to be really cohesive in our thoughts and be able to be predictable for each other,” Fraser said. “If we’re thinking about situations with all seeing it with the same or very similar solutions, then we feel like it will be the best way for us to go forward.”

Fraser enters his first full season as an MLS head coach for the first time since 2012 when he coached the now-defunct Chivas USA. He’s spent time as an assistant at Toronto FC and has come a long way since then.

One way that Fraser has enforced the idea of cohesiveness is by holding a three-week offseason camp during the playoffs last year. The idea was to minimize the players time off as Colorado wasn’t in the playoffs – and it turned out to be a perfect move.

“You come off of a season like they had, that they’ve had three coaches, that obviously were left for dead early in the year and ended up playing catch up most of the year, they could have easily…” Fraser explained, “it was an emotionally draining season for them and they could easily have not put it into this post-season training being asked of them.

“But they came in and they worked incredibly hard every day. I was amazed that they have nothing to play for in front of them, not in the short run, but for them it was a chance to continue what they had been doing and to get ready for this coming year. Every one of them took it so seriously, it was quite impressive.”

“We did a great job of kind of turning things around and kind of working on implementing a system in our game and just being more comfortable with it,” midfielder Kellyn Acosta told SBI. “I think having that short offseason is going to be definitely beneficial for us going into this year, obviously just getting the rhythm down.”

Cohesiveness and momentum will only take a team so far though. Colorado made several key moves that should help push them above the playoff line this season.

The first, and most important move, was solidifying the backline. The Rapids brought in a rising defender in 21-year-old Auston Trusty and a longtime MLS veteran in 36-year-old Drew Moor. Both are tasked with helping improve a defensive side that conceded 63 goals in 2019, the third-most allowed, behind Sporting Kansas City’s 69 and FC Cincinnati’s 75.

“Defensively, we want to be hard to play against,” Fraser said. “We’re talked about trying to find ways to make sure that we’re more solid defensively, that we give up less chances.”

They also added some firepower to their attack with a pair of promising wingers in designated player Younes Namli and former TFC midfielder Nicolas Benezet. The Rapids also have 19-year-old Argentine forward Braian Galvan coming over from Colón in the summer as a late reinforcement.

With one more DP slot open, they could make another big move in the summer if the season hasn’t completely gone their way.

Here is a closer look at the 2020 Colorado Rapids: 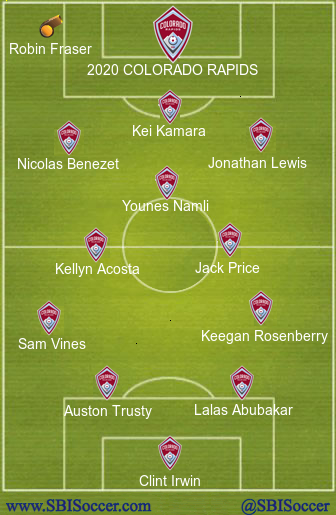 If last year was any indication, the Rapids are going to score and score often in 2020. With Namli on the pitch, someone they’ve gone after for the last two seasons, they add even more firepower to an already potent attack. The Danish attacking midfielder brings a lot of experience from Europe, having played in both the Europa and Champions League over his time.

Even though this will be his first season, Trusty’s biggest goal this year will not only be to help Colorado limit the amount of goals they’ll concede. He’ll have to help anchor and lock down a backline that allowed 63 goals last season, third-most in all of MLS.

Last year was a bad year for Colorado overall, but it was also a season that, for the first time since the 2016 playoff year, seemed to put the club in the right direction.

The Rapids winning five of their last seven matches, the first seven matches under their new head coach Robin Fraser, looked like a preview of things to come from both sides of the pitch, both in the attack and defensively – the Rapids outscored opponents 15-8 in that stretch.

The key for the Rapids in 2020 is cohesiveness and details.

“It comes down to little details,” Acosta said. “For us, those little details that were implemented with Robin made a difference, and I think that momentum into this year is going to be crucial.”

With additions in crucial places, along with continued development of rising talent, like Rookie of the Year Andre Shinyashiki, the Rapids should be much better on the pitch, picking up from where they left off at the end of last season, and should be able to avoid another long skid to open the season.

“Guys look around and know there’s competition,” Fraser said. “There’s no question that competitions is one of the things that will always bring the best out of competitive people, and we’re already seeing that.”