It’s the dawn of a new era in Houston.

Now the question is if this is the era that sees the Houston Dynamo return to the playoffs.

Houston finished 10th in the West last year with 40 points (12-18-4) and failed to defend their U.S. Open Cup title, falling to Minnesota United in the Round of 16.

Despite winning the U.S. Open Cup just two years ago, the lack of regular season success and the sense of a playoff drought wasn’t enough to keep Wilmer Cabrera around anymore. The Dynamo are looking forward now, looking towards their youth and they hired just the man to push them forward: Tab Ramos.

“The team is making good progress,” Ramos told SBI. “We’re getting better week to week, both physically and tactically. I think the players are understanding the concepts and the principles that we want, and I feel like we’re exactly where we want to be.”

However, don’t expect a sudden youth movement in Houston just yet. While he’s not opposed to playing the club’s rising youth players, he’s not going to rush any one of them onto an MLS pitch. Instead, he’s going to make them earn their way up.

“I really like what I see here in terms of having a proper direction for our youth players to be able to get into the first team,” Ramos explained. “Of course, that pathway is a difficult one because it has to be earned, so I’m getting that message across to all the youth players here.

“If they do well, they will be here with us.”

The question now is, can he replicate that success in Houston, again, a club that has missed the playoffs in five of the last six seasons.

The Dynamo made some significant moves during the winter. They brought in a dangerous goal-threat in Darwin Quintero who spent the last two seasons continuously finding the back of the net with Minnesota United. He’ll most likely solidify a Houston attacking threat that already features the likes of Alberth Elis, Christian Ramirez, and Mauro Manotas.

“I think we have the potential of being a team that can score a lot of goals,” Ramos said. “But I think it all starts with organization and it starts with the team being able to defend well.”

Houston aimed to lock up their defensive side of the pitch by acquiring Marko Maric, a Croatian international goalkeeper out of the Bundesliga that replaces Joe Willis between the posts, and defender Victor Cabrera who, if he can stay healthy, can help a Dynamo backline that conceded 59 goals last season, tying Vancouver and the LA Galaxy for second-most goals allowed in the Western Conference in 2019, third most in all of MLS.

“I feel like I have a very good grasp of where our full club is all about,” he said. “I’m here to do the best I can and to try to win every game I coach. My focus is really having the team play the best we can and win games.” 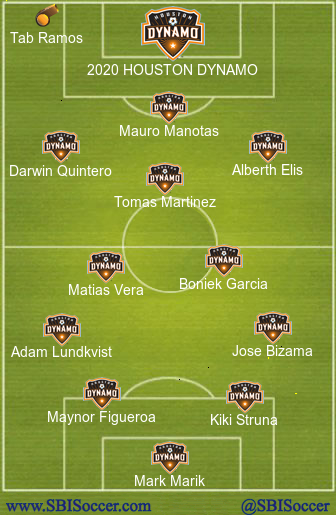 Darwin Quintero made quite the entrance into MLS in his first two seasons with Minnesota United, tallying 21 total goals with 20 assists in 57 matches with the Loons. Now in Houston, he’ll look to add even more firepower to an already potentially dangerous attacking front, as he’ll look for his third-straight season of 10-or-more goals.

Matias Vera had a solid MLS debut last season, despite Houston’s overall struggles on the defensive side of the pitch. As the Dynamo added firepower, Vera will need to continue his solid play in the middle of the park while supporting a backline that conceded 59 goals in 2019, third worst in the league.

There’s a lot of positivity coming out of Houston’s camp, and rightfully so. Tab Ramos brings a wealth of success with him from the national side with the U.S. U-20’s into his first stint as an MLS manager.

He’s adjusted well to the day-to-day of managing a club and says that he likes the daily grind of running a club compared to the short time he had during international duty.

It also helps that he has a lot of solid talent to get him through his first season.

Alberth Elis, Darwin Quintero, Mauro Manotas, and Christian Ramirez should be able to all provide and score goals in bunches. If Houston’s going to make any type of run, they’ll need to reach the 60-goal mark as a team in 2020.

The Dynamo are also bringing back their backline from last year – Alejandro Fuenmayor, Adam Lundkvist, Aljaz “Kiki” Struna, and Jose Bizama all return, led by Maynor Figueroa anchoring it down. They will need solid production from newcomers Marko Maric in goal and defender Victor Cabrera who could play a key part in solidifying that backline if he can stay healthy.

The defensive side is the question. Houston conceded the third-most goals in MLS last season (59), but this could turnaround under Ramos, who preaches organization and solid defending.

“No team is going to be a high-powered, offensive team if you can’t defend well,” Ramos said. “So it all starts with being organized and defending well, and then I think we have the potential of being a team that can score a lot of goals.”