When the New England Revolution hired Bruce Arena as head coach and sporting director in May 2019, he took over a team nailed to the floor of the MLS Eastern Conference table following consecutive five-goal losses under former coach Brad Friedel.

By the close of the campaign, however, Arena presided over a resurrection that saw the Revolution reach the MLS Cup Playoffs for the first time since 2015. If Arena’s reputation as a fixer suffered a dent when the U.S. Men’s National Team failed to qualify for the 2018 World Cup after he replaced Jurgen Klinsmann, there was a measure of restoration that culminated in an unlikely playoff appearance for New England.

The Revs now face the recently unfamiliar burden of high expectations for the 2020 season, which starts Feb. 29 at Montreal Impact. In reality, according to Arena, who has won a record five MLS Cups as a coach, patience is still required as he attempts to build a consistent winner in New England.

“We inherited a team that wasn’t particularly good, so it would be really dumb for us to have high expectations as a group and talk about winning things right now,” Arena told SBI. “It takes time to build a winning franchise, so we’re going to be patient with the players and try to get better. That’s the way we go about things every day.”

Goalkeeper Matt Turner added that it is easy to look at qualifying for the playoffs as a success, but the Revs were seeded seventh and had to climb out of a 2-8-2 hole of their own digging to start the season, so they own any failure as well.

Turner had a star-making turn with a string of scintillating saves across the 20 matches he played last season. He finished fifth in the 2019 MLS Goalkeeper of the Year voting and earned call-ups to the U.S. Men’s National Team for the November and January camps.

With Turner preventing goals, New England’s dynamic Designated Player duo of midfielder Carles Gil, the MLS Newcomer of the Year in 2019, and forward Gustavo Bou, played a harmonious creator-finisher tune in the attack. Gil, who is from Spain, had 10 goals and 14 assists in his debut season. Bou, an Argentinean in-season acquisition from Club Tijuana in Liga MX, tallied nine goals in 14 MLS appearances, including several highlight-reel strikes.

In 2020, Gil and Bou will be part of a DP trio with the addition of Adam Buksa, a 23-year-old Polish center forward. Add Cristian Penilla into the mix, and it becomes a promising goal-scoring quartet.

Who plays between Gil, Bou, Buksa, Penilla and Turner in midfield and defense—and how well they do it—will determine how many scoring chances get created and the needed number of high-quality saves. How the Revs will line up is also not static, especially in midfield.

“A formation is a starting point, it’s not an ending point for any team,” Arena said. “If you don’t have the ball, I don’t think it matters a whole lot.”

Under Arena last season, New England was most effective in a 4-2-3-1, but there was plenty of tinkering. Arena said that the one certainty is that he will use a back four with the likely first-choice combination from left to right being Dutchman Alexander Büttner, who was signed using Targeted Allocation Money, Antonio Mlinar Delamea, Andrew Farrell and Brandon Bye (though rookie centerback Henry Kessler has had a strong preseason and could be a breakout candidate in 2020).

In midfield, Wilfried Zahibo and Luis Caicedo could play behind Gil, Bou and Cristian Penilla.

Here is a closer look at the 2020 New England Revolution season: 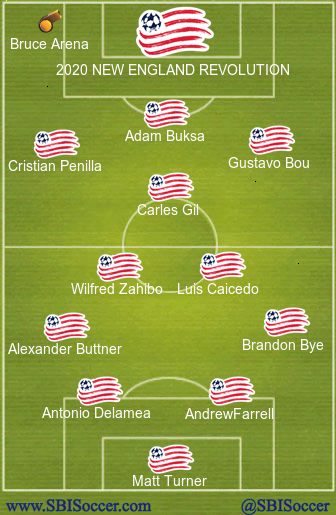 The 6-foot-3 Polish youth international was signed as the team’s third DP in December after his six-year club career in Poland saw him linked with clubs in England, France, Germany and Italy. He has represented Poland at the U-21, U-19, and U-17 levels and received first career call-up to Poland’s senior team in November 2018 for a friendly against the Czech Republic and a UEFA Nations League qualifying match against Portugal, but ultimately did not play.

Arena said Buksa might need “a little bit of time” to adjust to a new league and country, but that “he’s a guy that we think will score goals for us this year.”

“Adam’s been persistent on a daily basis about training really hard and trying to adapt to the group, so we’ve been really pleased,” Arena said. “He’s fit in quite well.”

Entering his 10th season, the 25-year-old Fagundez is the longest-tenured member of the Revs, signing with the club in November 2010 as their first-ever Homegrown Player. He ranks inside the top five in club history in games played (242), goals (52), assists (45), and in 2019 became the first Homegrown field player in MLS history to eclipse 15,000 regular-season minutes.

Fagundez also last season played the fewest minutes (1,176) and recorded his fewest goals (two) since 2012. With Gil, Bou, Buksa, Penilla likely set to drive the attack, Fagundez can provide Arena with a viable attacking option off the bench. Unless he rediscovers his form from 2013-18, it is tough to see Fagundez starting outside of squad rotation or an injury/suspension situation.

With three attacking DPs and a rising goalkeeper, the Revs should be able to score enough goals and prevent their fair share, which will have them pushing for a playoff position in the Eastern Conference and probably a home match, too.

Can New England take it a step further in 2020? That will depend on a couple of factors. One thing that is not an issue is team chemistry. The Revs are a close-knit group, who grew even closer through their tough start last season. When Bou joined the team in July last year, he often remarked how close the locker room was and how much easier it made his transfer.

“I think the coaching staff has done a great job at identifying not only quality players but also personalities that fit in with the rest of the team,” Turner said. “And I think that there are guys that have been here for three years, we’ve been through a lot together, and that makes guys a little bit closer. I think there’s always been a belief in this group that we have the players to do special things, it was just about getting the ideas out on the field, and I think you saw that last year.”

A potential land mine for the Revs could be injuries. Arena created some depth through additional off-season signings like veterans Kelyn Rowe and Seth Sinovic, but it is already being tested as Gil and Büttner have missed large swaths of the preseason. Gil’s absence is glaring because he was omnipresent last season as he played all but eight minutes and took his fair share of hard tackles while scoring and creating goals.

If the Revs can stay relatively healthy, then taking a step further in the Eastern Conference playoffs is a very real possibility, with Arena having already helped New England build the strongest roster the Revs have had since their run of MLS Cup finals more than a decade ago.