If there was anything that can be taken away from the 2019 San Jose Earthquakes, is that they may have come further along than many may have then predicted.

In case you missed it, the 2019 San Jose Earthquakes had their share of moments, both good and bad. They opened the year with a four-match losing streak, and followed that up with one of the hottest summers in club history, climbing out of the basement of MLS all the way up to second place in the Western conference behind eventual Supporters’ Shield winner LAFC. They followed that up by losing their last six matches to knock themselves out of the playoffs.

In between all of that, longtime captain Chris Wondolowski shattered Major League Soccer’s all-time goalscoring record with a sudden four-goal performance at home against the Chicago Fire in May. Young midfielder Jackson Yueill started to step into the spotlight both in San Jose and with the USMNT and many of those who questioned Matias Almeyda’s tactics and philosophy saw how it could work, when it does, in fact, work.

So how do the Earthquakes follow up a 2019 season that had a storyline only Netflix could write?

Simple: play more consistently and win – win early and often, at home and away.

“Just being consistent game in and game out, at home and on the road,” Yueill told SBI. “I think last year we had a lot of confidence. I think a lot of people didn’t want to come and play us at home. I think that gives us a big advantage.

“I think for this year, our focus would be on keeping the home record as best as possible as we as when we go on these long trips.”

The chemistry that they began to build in 2019 is expected to show even greater on the pitch this season.

“As far as chemistry goes, we kept a lot of the same guys, so there’s not a lot of new things to learn about each other and about the system,” longtime Earthquakes midfielder Shea Salinas told SBI. “So, we can kind of do more building on top of what we established and less foundation work.”

An even greater storyline that might slip through the cracks in San Jose is that Almeyda is the first head coach since Dominic Kinnear to return as the head coach the following season. Kinnear coached the Earthquakes in two separate stints, most recently from 2014-17. Since Kinnear’s dismissal in 2017,  San Jose has had Chris Leitch (2017), Mikael Stahre (2018), and Steve Ralston (interim 2018) all take over the touchlines, none of which returned to coach the club the following year.

“I think just having Matias as a coach… he’s done a great job with the staff,” Yueill said. “Implementing all of his tactics and going into the season, knowing what he wants and he expects, it made the offseason a little bit more oriented on his focuses and you knew what you needed to do to come in and be ready. I think that helped a lot of people.”

“This year is different because we’re going to know what to expect,” Salinas echoed. “We want to be one of the top teams in the West and make a run in the playoffs and win the MLS Cup.”

There’s also the elephant in the room: this is Chris Wondolowski’s final season. The longtime Earthquakes captain announced that this will be his final season after 17 years in MLS, putting slightly more pressure on the Earthquakes to not only reach the playoffs, but perhaps win it all in their captain’s swan song.

“This year is very special for him, special for all of us,” Yueill said. “Whatever we can do to help his legacy even more than he needs it, we’re all about it.” 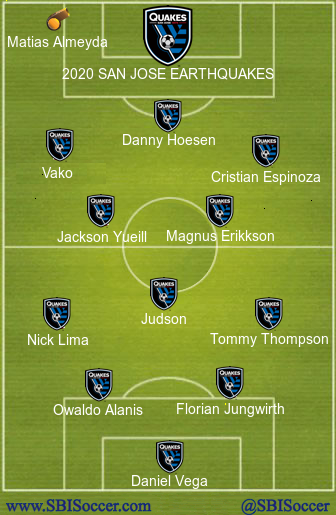 With Harold Cummings gone, Alanis easily steps in as the best and most experienced centerback in San Jose’s backline, a much needed addition for a team that seemingly couldn’t stop anyone from scoring either to begin or end the season last year. He knows and has won with Almeyda and his system  from their time together at Chivas. Durability is a question mark for Alanis though, but if he can stay healthy he should help the Earthquakes defense be stronger in 2020.

There’s no question that Nick Lima can play well. The question more now surrounding the fourth-year Earthquakes Homegrown signing is how he’ll rebound after what was a weird year for him. He started the first three matches for San Jose before getting benched for the next three matches starting with the March loss against LAFC. He eventually earned his job back, through the rest of the season, but missed a lot of time due to USMNT duty and, briefly, to a minor injury. Even with rookie Tanner Beason coming up quick, Lima’s spot at left back is his to lose, but Almeyda has shown in the past that he will bench players who aren’t performing to his standards and if Lima does find himself in Almeyda’s dog-house again like he did early last year, who knows what Lima’s future in San Jose would be.

With Matias Almeyda at the helm, the Earthquakes have a proven winner leading them, one who has taken less talented teams when they’ve hit rockbottom and turned them into winners.

Everyone saw a little bit of that last summer when San Jose turned their season around and seemed like they were heading toward the playoffs as one of the top-four seeds.

Last year’s expectation was to rebound from the four-win 2018 campaign that resulted in the burning of a wooden spoon – they exceeded that with 13 wins. The 2020 goal is to win, and for the first time in what seems like a long time, there’s a sense of a playoffs, and even an MLS Cup expectation in San Jose in their longtime captain’s swan song.

“I think the next step is winning more games and end up being more consistent,” Salinas said. “I think we have a goal this year of being first or second in the West and playoffs are definitely a goal.”

The key to that is to get off to a hot start. Last season marked the first time in the Earthquakes Stadium era (formerly Avaya Stadium), that the Earthquakes lost their home opener.

“We learned that the start and the end of the season are very important,” Yueill said. “We started the season off terribly and we ended it pretty poorly as well. So, we’re putting a lot of focus on coming home, coming out of the gun, shooting really fast and trying to get as many points as possible off the beginning.

“We’re going to have good moments and bad moments, but kind of keeping it stead throughout the entire year and then hopefully making the playoffs running.”

The Earthquakes enter the second year of Almeyda’s beloved project, a potential masterpiece in the making. How the Earthquakes start the season could dictate whether or not the newly-named Earthquakes stadium sees playoff soccer for the first time in its history, or if it will be more of the same old story in San Jose.