Going into year two of the Marc Dos Santos era, the new-look Vancouver Whitecaps will be eager to turn the page on last season’s woes and start anew.

Having finished in 12th place in the Western Conference, the Whitecaps invested heavily this off-season, breaking the club’s transfer record on Canadian international Lucas Cavallini, among other marquee signings.

Winless runs and inefficiency in front of goal characterized the Whitecaps in 2019. In fact, only expansion side FC Cincinnati scored fewer goals than Dos Santos’ men. While the side struggled for results, the Montreal-native is confident last season served its purpose.

“Last year we were able to build a core that we can carry into this season,” Dos Santos told SBI. “We added pieces with the right profile and right identity this off-season. I’m expecting a lot of growth this year compared to last.”

Beyond key acquisitions, Dos Santos is hoping for an identity shift at the club. In his first season at the helm, the Whitecaps defended deep and looked to hit the opponent on the break, something the tactician is actively hoping to change.

“We’re going to be a team that’s going to win the ball higher up the field. A team that is more dynamic and very hard-working,” said Dos Santos. “People that play against the Whitecaps are going to find it tough.”

Defender Jake Nerwinski is looking forward to year two under Dos Santos. The 25-year-old is going into his fourth season at the club and is eager to play in a more proactive system.

“We’re going to be a lot more aggressive than we were last year. At times, we defended more than we had to,” Nerwinski told SBI. “I want to be more involved in the attack, which is something Marc (Dos Santos) is putting an emphasis on.” 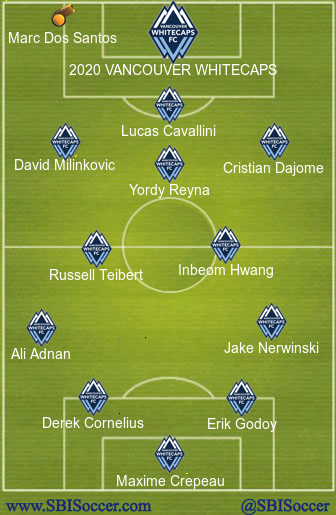 Having scored a mere 37 goals last season, the Whitecaps identified Cavallini as their main target. El Tanque has a proven track record in front of goal, as demonstrated through his 11 strikes in 17 appearances for the national team.

Beyond his impact on the scoresheet, Cavallini is notorious for his work ethic and will be hoping to lead a young Whitecaps side by example. As Vancouver looks to usher in a new era, expect the 27-year-old to become the face of the franchise.

With Cavallini usurping him as the side’s main striker, Fredy Montero will need to adapt. Last season, the Colombian lead the Whitecaps in scoring with eight strikes in 32 appearances, but will likely see his minutes reduced going into 2020.

As his contract is expiring in December, Montero will need to acclimate himself to his new role or risk a prolonged spell on the sidelines.

The Whitecaps are going into the new season with a renewed sense of optimism and a significantly retooled side. Beyond Cavallini, Colombian winger Cristian Dájome joined from Atlético Nacional and will add some much-needed unpredictability in the final third.

Primarily used on the left-wing, the 26-year-old has a keen eye for goal and will be looking to strike a partnership with Cavallini. Factor in Yordy Reyna and the Whitecaps’ front-three have the potential to establish themselves as one of the league’s dynamic trios.

At the back, the Whitecaps made Érik Godoy’s move permanent following a successful debut season on loan.  Ranko Veselinović also recently joined the fold following Doneil Henry’s departure. The 20-year-old represented Serbia across all youth levels and captained his former side Vojvodina.

After this off-season, the Whitecaps roster is the youngest on average among all MLS clubs, but that doesn’t faze Dos Santos. “It’s a young team that’s going through some changes, but we can play against anyone in MLS,” said Dos Santos. “I think playoffs are a realistic objective for us. They always have to be on our minds.”

Last year, the Whitecaps kicked off their season in the worst possible fashion, going winless in their first six games. Given the significant upheaval at the club, that saw 21 players depart and 15 players arrive, growing pains were to be expected. With a full pre-season under their belt, however, Nerwinski is confident they can hit the ground running.

“I have pretty high expectations for the team this season. I’m really excited for this group of guys and the new system. I think playoffs are a completely realistic objective,” said Nerwinski. “We’re going to be able to showcase our athletic ability and our competitiveness more.”

After missing the playoffs for two consecutive seasons, Dos Santos is looking forward to starting fresh. “I think we’re going to grow a lot. We have more pieces that can compete with the top sides,” said Dos Santos. “Cavallini’s arrival sets the tone for the rest, he’s a warrior. I’m happy to have a player like him on the roster.”

While the 27-year-old’s arrival dominated the headlines this off-season, the veteran tactician believes his side’s biggest asset remains the collective. “We look to bring in the right profiles and make sure that the team is bigger than the individual,” said Dos Santos. “Our focus is the core and the whole of the team all the time.”

As the Whitecaps look to shed their former identity, this season’s focus will be on growth and improvement. Playoffs remain a realistic objective for Vancouver, but Dos Santos has his sights set on something that transcends results.

“What’s important to me is to focus on the process, and regularly do the little things to get better,” said Dos Santos. “If we can do that, we’ll put ourselves in a position to compete for something. That’s what we have to be about as a club.”