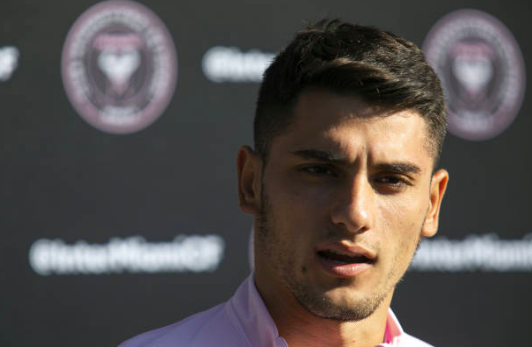 FORT LAUDERDALE, Fla. — Inter Miami is about three weeks away from making its debut, but the team will head into that first match at less than 100 percent.

Young forward Julian Carranza has been sidelined for 10-12 weeks with the left foot injury he sustained on Jan. 30, according to sporting director Paul McDonough. Carranza was taken off the practice field that day on a golf cart, and the medical staff’s ensuing report on his knock did not bring with it good news for Inter Miami.

“He’s injured and we’re waiting for him to recover as soon as possible,” said Inter Miami head coach Diego Alonso before practice on Monday morning.

One of the first two player signings Inter Miami announced last summer, Carranza was expected to be a regular part of the team’s attack from the start of the season. The 19-year-old forward that joined from Banfield in his native Argentina will now, however, miss the MLS expansion club’s first official game on March 1 vs. star-studded LAFC and several more after that.

“We lose a lot because Juli is a player that’s very important for us,” said Inter Miami center back Nico Figal in Spanish. “He’s a player that has a lot of promise, a forward that is coming off a good stint in Argentina. We’ll just have to try to replace him as best we can and there are players that can do so in a good way.”

With Carranza expected to be sidelined until at least April, Inter Miami will have to rely on its other forwards to help lead the charge in the short term. Juan Agudelo, Jerome Kiesewetter, Lewis Morgan, and first overall MLS draft pick Robbie Robinson are the other options Alonso can turn to up top.

Carranza, meanwhile, will have to watch from the stands as he nurses himself back to full health.

“For any player, it’s bad to start with an injury,” said Figal. “An injury hurts psychologically, but we’re attentive with him, we ask him if he needs anything. I know it’s a difficult moment for a player to be injured, but we have a very unified group that is being put together and that makes him very happy.”