Sporting Kansas City finds itself in an unfamiliar position coming into 2020. The team missed the playoffs for the first time in eight years in 2019 and that misfortune has put the team in a new mindset for many of the experienced members of the team.

“It gives us a chance to reset,” goalkeeper Tim Melia told SBI. “The longer offseason allowed for more time at the gym, more time to train and get better for 2020. I guess there is a silver lining.”

“Camp has been going well,” head coach Peter Vermes told SBI. “The guys are working hard, getting in the proper mindset, and ready for the next phase of the preseason.”

SKC certainly have some things to work on heading into the new year. They had the second worst defensive record in all of MLS last year. Only FC Cincinnati was worse. With that in mind, Vermes and his front office went out looking for solid options at the back. Members of the old guard like Matt Besler and Graham Zusi are still there, but they have some young, fresh talent in there to stave off complacency.

To do that, Vermes brought in guys capable of competing for starting time. He made key acquisitions aimed at providing experienced starters with competition for their starting jobs.

“We brought in guys at all three levels of the lineup that could start. We wanted to add depth, and I feel like we did just that.”

Croatian defender Roberto Puncec brings along Europa League experience and could unseat Botond Barath and Matt Besler as the established starters in central defense. They brought back 2015 draft pick Amadou Dia from a two-year stint with Phoenix Rising FC in the USL and he will compete for the left back spot. Vermes praised his ability as a one-on-one defender on the outside, a reputation backed by an excellent defensive record with a historically great team in the USL. Both of them are looking to turn around the leakiest defense in the Western Conference.

In the midfield, Vermes brought in Gadi Kinda from Beitar Jerusalem on loan to provide depth while keeping Ilie Sanchez and Felipe Gutierrez on their toes. He’s a technically-sound player who will contribute defensively while also helping the team move forward towards the crown jewel of their offseason acquisitions.

Mexican striker Alan Pulido arrived in December and is the man SKC are hoping turns around their attack.. They struggled to find scoring a year ago and Pulido is fully expected to rectify that problem. Gutierrez led the team last year with 12 goals and Vermes “would certainly hope” that Pulido can be the team’s main forward night in and night out as he blows past that team leading total from 2019.

He’s already fitting in well with both the team and the Kansas City community.

“The guys have really taken to his presence in the locker room and seen his skill on the field,” Vermes said.

He also famously appeared at a Kansas City Chiefs playoff game in January, shortly after he signed his new four-year contract in MLS, endearing himself to the fans right from the start.

Here’s a closer look at the 2020 Sporting Kansas City season: 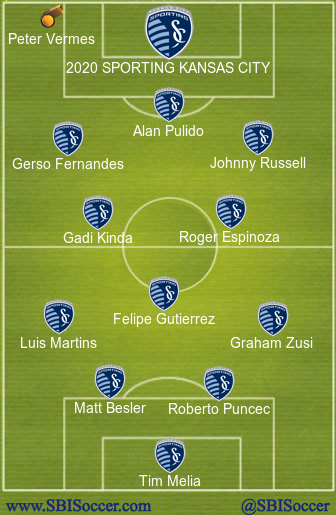 Pulido is the crown jewel of Sporting KC’s offseason. The former Chivas de Guadalajara striker had a dozen goals in 18 games during the 2019 Liga MX Apertura season and SKC are going to expect him to score at a similar pace in 2020. He’s a gifted player with an ability to become a presence in the box that SKC hasn’t had in years. He will lead the line on most nights as a skilled finisher that will certainly help turn around a team that struggled to find goals at times a year ago.

SKC’s offseason was more about retooling than rebuilding and that includes providing some competition between the sticks for longtime goalkeeper Tim Melia. Vermes touted acquisitions in all phases of the game, including at the very back and stated that former Chicago Fire and FC Dallas goalkeeper was brought in to compete for the starting spot. Make no mistake, Melia is the number one, but should he slip up and SKC start letting in goals in much the same way they did last season, Vermes won’t hesitate to make a change if he feels Sanchez gives them a better shot at winning.

SKC may have just missed the playoffs for the first time in a while, but they haven’t lost focus on what really matters to players, coaches, and fans alike: winning trophies.

“I said when I first came in here I was going to have this team competing for trophies every year,” Vermes said. “Last year isn’t going to change that at all.”

“While every team wants to strive to make the playoffs, the only thing we really want to do is win a trophy,” Melia said, echoing his head coach.

SKC’s success will hinge on how well the defense improves on a disastrous 2019 that saw the back-line surrender the second-most goals in MLS. Central defenders Roberto Puncec and Winston Reid give Vermes more options in central defense, while Matt Besler looks to have a bounce-back season after struggling last year.

Offensively, Sporting KC will rely on Pulido to score the goals while returning forwards Johnny Russell and Daniel Salloi set him up while providing a couple goals of their own. Gutierrez and Kinda will need to contribute on the attack as well, while Sanchez sits in the holding midfield role to cover for a central defense that will need to prove itself capable of stopping tough opposition.

SKC can get contributions from youth off the bench and potentially in spot starting roles. Gianluca Busio both made waves last year at the age of 16 with 10 starts. He isn’t ready to be a first choice midfielder, but he looks like a real prospect for the future. They have a slew of other homegrown products on the senior team that could pop in for a cameo or two. Tyler Freeman is a forward prospect who’s developed a chemistry with Busio at the SKC Academy and with U.S. youth national teams. Cameron Duke, Jaylin Lindsay, and Wan Kuzain are also promising players all under the age of 21.

Most of the guys won’t have an impact in 2020, but they paint an optimistic future for a Sporting KC team that wants to return to contention as quickly as possible.

While Sporting KC wants to win silverware, the team might have to settle for a U.S. Open Cup run this season as winning MLS Cup is probably too much to ask for, especially in a very top heavy Western Conference. Making the playoffs is certainly the bare minimum expectation for a Sporting KC team that is already itching to return to the postseason after only one year off.