After missing the playoffs three years in a row, changes were always on the horizon in Montreal this off-season. Olivier Renard was promptly appointed as sporting director while former Arsenal legend Thierry Henry replaced interim boss Wílmer Cabrera at the helm.

With their Concacaf Champions League opener coming up against Deportivo Saprissa, Henry will be looking to kick off his tenure on the right foot. Last season, the Impact struggled defensively, something the French tactician will be looking to rectify immediately. In fact, only expansion side FC Cincinnati conceded more goals than the Impact in the Eastern Conference last year.

“We’re working with what we have, we cannot look for excuses,” Henry told SBI. “People might say things, but it doesn’t matter. This is the team we’re going to fight with.”

Together, Henry and Renard are hoping to usher in a new era in Montreal, one that will hopefully yield more silverware for the Impact. They will have to do so without Ignacio Piatti, however, who recently returned to San Lorenzo.

“Losing Nacho (Piatti) is a massive loss,” Impact midfielder Shamit Shome told SBI Soccer. “At the same time, we’re confident as a team that we can continue without him and focus on the collective. It’ll take time to settle in without him, but we can bounce back from that. We’ve got some great players up front that can do damage.”

Rather than making wholesale changes to the side this off-season, the Impact opted for minor adjustments across the board.

“It’s great to be working with a guy like Henry, it was surreal at first but now it’s settled in,” said Shome. “There’s definitely some changes this season compared to last. Every day you see his footballing knowledge on display and hopefully, we can learn from it and become a better team. “

Shome is going into his fourth season with the Impact and is hoping to become a mainstay in Henry’s lineup.

“I’d like to assume more responsibility and contribute to the team offensively with goals and assists,” said Shome. “I want to be one of the players the coaches and players can count on to do the job.” 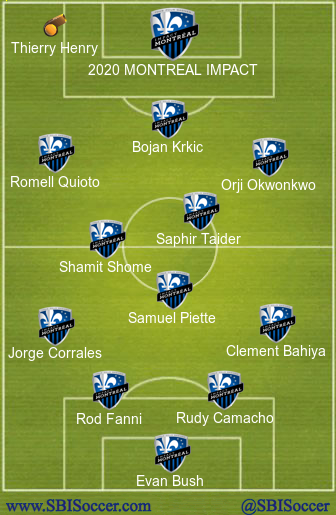 The Impact acquired the 28-year-old in hopes of adding speed, unpredictability and most importantly goals, from a wide position. While he’s not a like-for-like replacement for the departed Piatti, Henry will be hoping Quioto hits the ground running. The former Houston Dynamo man has a plethora of MLS experience and has four goals in 14 Concacaf Champions League games.

With his contract expiring this year, Maxi Urruti needs to have a big season in front of goal. Brought in from FC Dallas to lead the line, the Argentine hitman struggled for form, scoring four goals in 31 appearances.

This year, Urruti faces competition from Bojan Krkic and Anthony Jackon-Hamel and could find himself playing secondary minutes. With a new manager in town, his starting role is no longer guaranteed and it’s time the 28-year-old steps it up.

While the Impact haven’t been the most active team this off-season, the additions of Haitian international Steeven Saba and Canadian Premier League standout Joel Waterman will add some much-needed depth to their midfield and defensive units.

The return of Zachary Brault-Guillard also helps in this respect as the young Frenchman is expected to compete with academy product Clement Bahiya for the right-back position. Bahiya has impressed early on in pre-season with his offensive thrust but will need time to adjust to his new role considering he’s typically been fielded as a right-winger throughout his career.

Quioto and Emmanuel Maciel, the youngster who came the other way in the Piatti negotiations, represent unknown quantities for different reasons. On one hand, Quioto is coming off a bad season and will be eager to reinvent himself in Montreal. Maciel, by contrast, is just 22-years-old and will need to adapt to a new city, league, and style of play. As a result, it may be time before we see Maciel don the Impact’s bleu-blanc et noir.

Shome, however, has no doubts about the upcoming season.

“I see a big year ahead, both on a personal level and collectively,” said the midfielder. “There’s a new coach, new players and we’re all hoping to put in a good shift, have success, and do well in the playoffs.”

Last year, the Impact’s season was filled with ups and downs and the side typically hovered in and around the final playoff spots. After a stretch that saw them win only once in eight clashes, Montreal fell out of contention and Rémi Garde was inevitably replaced by Wílmer Cabrera.

The veteran tactician was tasked with leading the side in their last seven MLS games winning only two of them. Cabrera had success in the Canadian Championship, however, triumphing over fierce rivals Toronto FC and qualifying for this year’s Concacaf Champions League, which kicks off Wednesday.

This season, the Impact go into the new year with a relatively unchanged roster beyond Piatti’s departure and a few additions and will be hoping their new manager could instill a much-needed identity. Henry struggled in his past stint as Monaco’s manager only lasting 20 games, but knows the league well through his time with the New York Red Bulls.

“To be successful we have to be more intense, day in, day out and show more fight in games,” said Shome. “We have to play with more intensity and aggression and be more clinical in the final third. If we can do that, we’ll have success.”