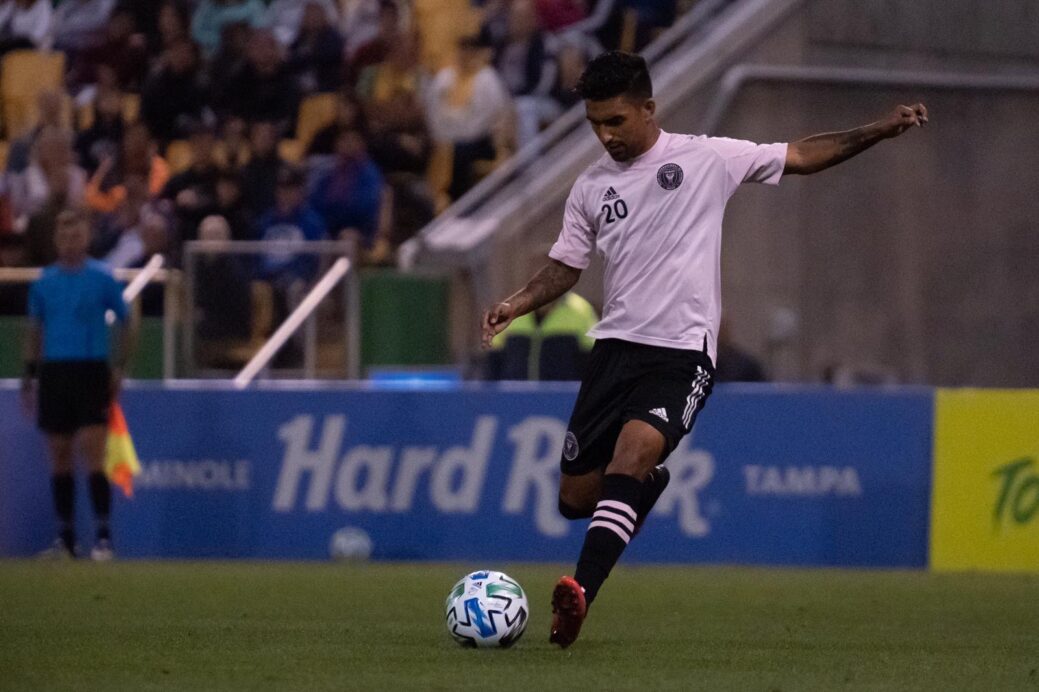 Inter Miami closed out its inaugural preseason camp on Saturday night by defeating the Tampa Bay Rowdies, 1-0, at a chilly and windy Al Lang Stadium. The MLS expansion side went with a lineup of mostly reserves in the exhibition match, but got a first-half goal from rookie forward Robbie Robinson that sent the sizable contingent of traveling fans back home with a reason to smile.

There were recurring themes in the game for Inter Miami, namely an ability to hold possession for large stretches while also struggling to generate many quality chances. Some new concepts emerged as well, including a surprise formation that the team may turn to once the season officially gets underway.

Here are three things we learned from Inter Miami’s preseason win over the Rowdies:

Inter Miami played a closed-door scrimmage against FC Dallas earlier in the day — whispers around camp said Inter Miami lost that match — and thus head coach Diego Alonso did not field a first-choice starting eleven for the evening bout vs. the Rowdies.

As such, this was a pristine opportunity for the projected bench players to make a case for themselves. But none really did — aside from Robinson.

The rookie forward not only scored the game-winner, but demonstrated good strength and mobility up top. He also showcased a fearlessness and willingness to take on defenders on the dribble, as well as some scrappiness and fight during a second half that got fairly testy on both sides.

“He had a very good performance,” said Alonso in Spanish. “We know his qualities and we’re happy about having him. That’s why we chose him No. 1 in the draft. We selected him with that first pick because the whole club understood that he’s a player that gives us options and a lot of quality, too.

“He has lots of room to grow still, but he has good qualities.”

You could see clearly on Saturday how very right-footed Robinson is when he attacks, but the striker was still clever and quick enough with the ball to fool defenders. On more than one occasion, he used a nifty cutback to create space for himself.

In fact, it was that very move that allowed him just enough of a window to slot home a slow-rolling winner with his left in the 23rd minute.

“Yeah, I use it a lot,” said Robinson with a smile when asked if he likes that cutback move. “It’s good, yeah.”

Robinson certainly boosted his stock with his display, and now stands an even better chance to start in Inter Miami’s MLS opener next weekend. There was no official update as to the status of injured forward Juan Agudelo on Saturday, and the veteran’s possible absence combined with Julian Carranza‘s guaranteed omission could open the door for Robinson to get the nod against LAFC.

Inter Miami trotted out a different formation this time out, opting to play out of a 5-4-1 rather than the 4-2-3-1 used in last week’s clash with the Philadelphia Union.

Saturday’s system looked like this at the back (from right to left):

Last week’s principal idea of keeping the ball on the ground remained vs. the Rowdies, but Inter Miami’s width in the match came predominantly from the wingbacks.

The three centerbacks, meanwhile, were used in a high line near midfield so as to try and pin the Rowdies in their own half. Torres even surprisingly advanced with the ball 3/4s of the field at times to pick out precise passes to teammates in good attacking positions.

Inter Miami looks to pin opponents in their own half so much that we’ve seen Roman Torres take the ball up 3/4s of the field multiple times.

Here, Torres is marking No. 13. This was just after Inter Miami lost possession. #InterMiamiCF #MLS pic.twitter.com/7kqObobVj5

“It was good to see the formation and to see the characteristics of some of the players that can adapt well to it” said Alonso. “I liked what I saw, especially in the first half.”

The change in formation may not have hindered Inter Miami’s ability to dictate the tempo by keeping possession for large stretches, but it also did not do much to increase the amount of clear-cut scoring chances the team generated.

Inter Miami once again found itself with the ball in the final third often, yet struggled to break down the opponent for the second straight week.

“What we may be missing is to create more dangerous opportunities,” said Alonso. “Too many times we get around the penalty area, and we don’t shoot or cross the ball. I think the team is doing well. We just need to fine-tune some things and create the feeling that we’re getting to the final third because we are.

“We’re very close to the opposing area, but we need to create opportunities, be it with a shot or a through pass or a cross, and to take more risks in that regard. That way we’ll surely get more chances than we have been getting.”

Teams that stress keeping the ball and playing it short on the ground sometimes have the issue of not creating enough quality chances. Instincts and instructions make it so that it becomes natural to want to make the safer play — opting for a simple pass instead of a shot or cross from further out, for example — and as such players tend to refrain from taking bigger risks and instead make an extra, unnecessary pass.

Inter Miami will have to address that because possession without production  is not a recipe for winning games consistently.

This was the second game Inter Miami played publicly this preseason, but it was the first one to really demonstrate what kind of passion and euphoria is brewing in South Florida as the team’s first season approaches.

Hundreds if not thousands of fans took buses, vans, and cars to St. Petersburg to root on Inter Miami against its inner-state foe. The Inter Miami supporters arrived throughout the day, and several waited outside the team hotel to greet and share a moment with the players as they left to walk over to neighboring Al Lang Stadium for the game.

Inside the venue, the South Floridians’ party continued before and after the 90 minutes. Flags, banners, drums, and a chorus of bilingual chants were seen and heard, making for a festive atmosphere that only served as a small sample of what is still to come.

Inter Miami players came out of their hotel and took part in some of the pregame festivities with fans.

Argentine centerback Nico Figal even got on the drums for a bit. 🥁 #InterMiamiCF #MLS pic.twitter.com/riKZnvyBV5

John McCarthy (6) — Came up with the one big stop that was asked of him.  Poorly raced off his line and missed the ball completely on a would-be equalizer, but video review saved him.

Alvas Powell (5) — Shaky on both sides of the ball in the first half before settling down a bit after halftime.

Roman Torres (6.5) — Solid in defending and found teammates in promising attacking positions with a few line-breaking passes. His experience and pedigree shone bright.

Christian Makoun (5.5) — Steady aside from the one blunder that saw him hit a weak backwards header that the Rowdies pounced on for their best look.

Grant Lillard (4.5) — Looked out of his depth with the ball at his feet and turned it over frequently, causing Alonso to shout in frustration at one point.

Mikey Ambrose (6) —Accurate with his passes and sturdy defensively.

Jay Chapman (6) — Did great work down the left flank to set up the winner and constantly got on the ball to initiate attacks.

A.J. De La Garza (5.5) — Playing out of position as a holding midfielder, the veteran circulated the ball quickly but did little else.

Lewis Morgan (4.5) — Not his best day. Struggled in his 1-on-1 battles up the field and was subbed out midway through the second half.

Luis Argudo (5) — Passed well in the middle part of the field, but rarely played forward and was invisible for much of the match.

Robbie Robinson (6.5) — Showed good mobility and a willingness to go at defenders. Cleverly cut back before slotting home on the decisive play.