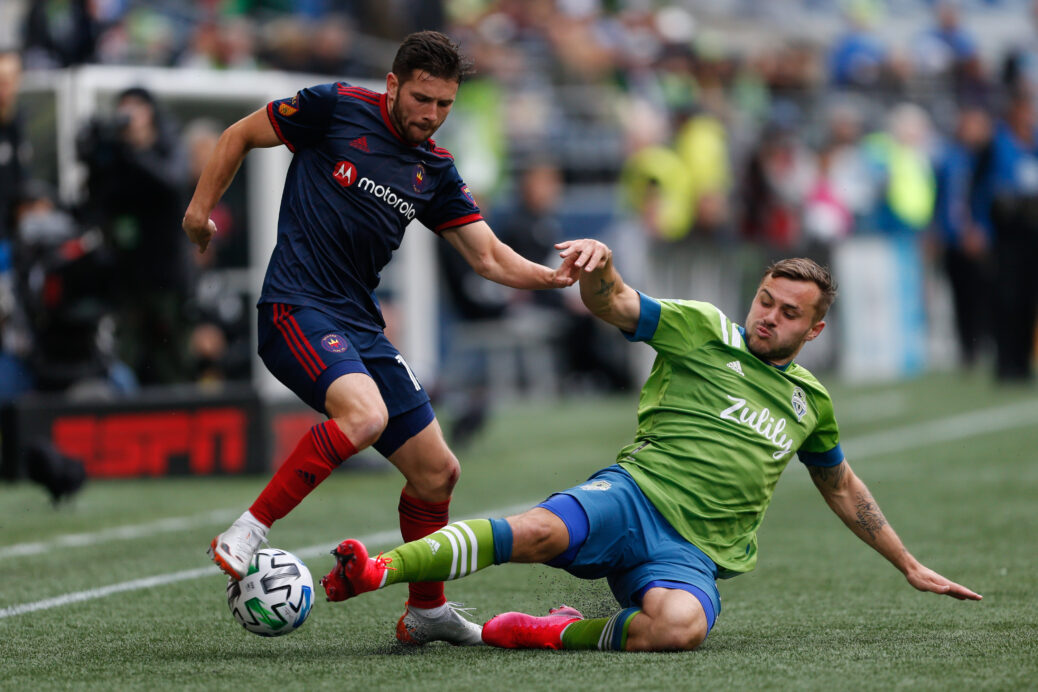 SEATTLE — Jordan Morris was pissed and motivated, according to his coach. Frustrated, said Morris.

Sunday was opening day of the season, and the Seattle Sounders were raising an MLS Cup championship banner in front of more than 40,000 fans. It was an important day in club history.

Yet Morris, the team’s star winger and a standout for the U.S. Men’s National Team, was sitting on the bench.

He wasn’t sitting for performance or as punishment, but to protect his health. Sunday’s match against the once-again-overhauled Chicago Fire began barely 60 hours after the Sounders were eliminated from CONCACAF Champions League on Thursday night — a match in which Morris played 84 minutes.

A rugged speedster, Morris has a history of leg and muscle injuries. And so with less than three days of rest between matches, Sounders head coach Brian Schmetzer decided Morris should start the MLS season opener on the bench.

Morris was not thrilled. After all, six of his teammates ended up playing 90 minutes both Thursday and Sunday. And with designated player Nicolas Lodeiro (tendinitis) and midfielder Gustav Svensson (calf strain) missing the match with injuries, the Sounders certainly needed all the talent they could put on the field.

“Jordan made some big strides over the course of the last 36 hours,” said Schmetzer after the match. “Because, you know, he has had a little bit of an injury history. And when we first started the conversation about him starting [on] two-and-a-half days’ rest — which is a tight turnaround for sprinters — he was actually pissed at me. He was upset. He was like, ‘No, Coach, I want to play.’ And we had a long conversation with the medical staff. I had to go with what I thought was best, because all players want to play.”

And so Morris sat for the first 45 minutes on Sunday. He watched his team mostly outplayed on the way to a scoreless first half against an opponent that had never won in six visits to CenturyLink Field. It was a match begging for an injection of speed down the touchline. Begging, that is, for Jordan Morris.

When Schmetzer inserted Morris for Danny Leyva before the start of the second half, he noticed that his super-sub seemed especially ready to get on the pitch.

“I could just tell,” said Schmetzer, “when we spoke to him about getting warmed up and [told him] he was going in at halftime, you could just see on his face that he was motivated. Now, whether that anger turned into motivation or whatever you want to call it, the kid was ready to play and prove to me, the medical staff, whomever it was, that he can play, and he can contribute on short rest.”

Whatever Morris was trying to prove, he did. The Sounders gave up a soft goal barely a minute after the break, but the rest of the half belonged to Morris, who delivered a first-touch equalizer just after the hour mark, headed home the game winner in stoppage time, saw a left-footed assist called back for the slimmest of offside calls, and generally went Beast Mode in a building where the term has some meaning.

Morris might have been frustrated before the match, but he is about as humble a professional athlete as you will find. The 25 year old was predictably diplomatic in the post-game locker room.

“I always respect the coach’s decision,” Morris said. “It’s always up to him. I’m a guy that likes to be on the field, so I think it’s always a little bit frustrating to not be out there. But I completely understand the reasoning, and I appreciate them looking out for me. But, yeah, I think my job coming in the game was just to try to use my pace to get behind and create some chances. So I just tried to come in and do that.”

Teammate Cristian Roldan, who assisted on both goals Sunday, sees big things on the horizon for his close friend.

“He elevated his performance, obviously,” Roldan. “I’m sure Jordan wished he would have started the game, but good players find a way to make an impact on the game even if they’re coming off the bench. And it’s difficult: coming off the bench is difficult. To really get incorporated into the game is tough. But Jordan made the most of his opportunities. [He] could have had an assist as well. [It was] a fantastic all-around game from Jordan, getting in behind the lines. That’s what you like to see from a player of his caliber. It’s gonna be a big year for him.”