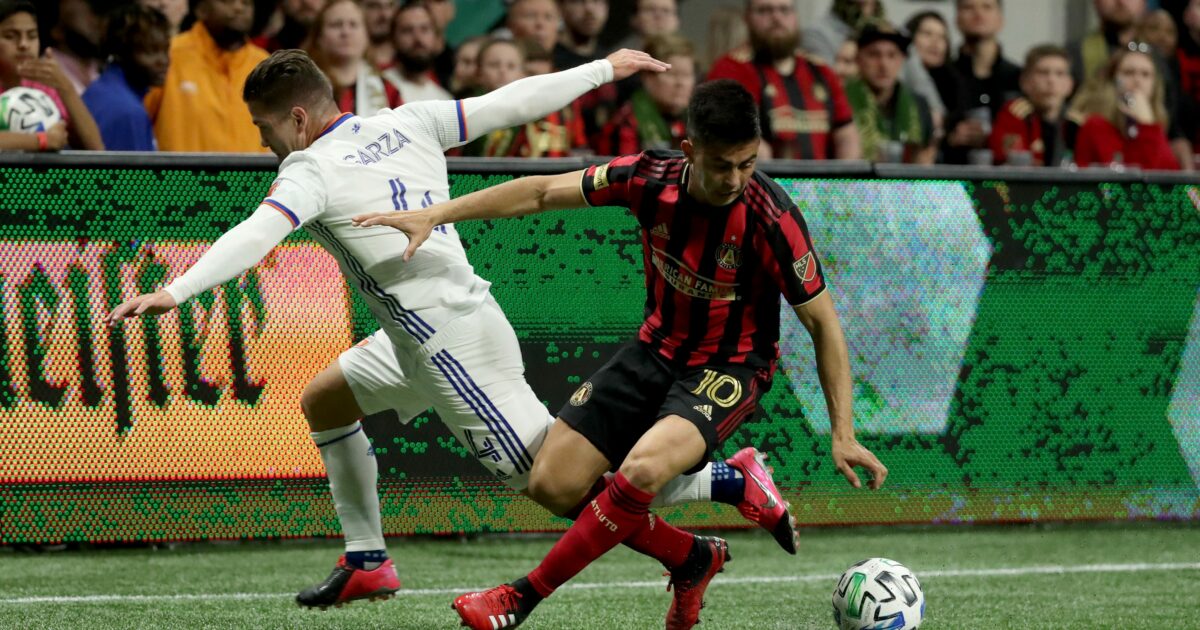 Atlanta United got the worst possible news after last week’s season opening win against Nashville SC. Star striker Josef Martinez had a torn ACL and the team would have to navigate the majority of the regular season without their talisman.

Atlanta is a talented team on almost all fronts, so on the surface losing Martinez is a challenge they can overcome. However, he’s a special talent as far as MLS is concerned and there isn’t really anyone capable of replicating what he can bring to a game.

In essence, Atlanta would have to deal with going from having a three-headed South American monster featuring Gonzalo Martinez, Ezequiel Barco, and Josef to a mere two-headed creature with a 6′ 3″ American journeyman hanging around for support.

Adam Jahn started his first MLS game in nearly three years in Saturday’s 2-1 win against FC Cincinnati. He’s had MLS experience with the Columbus Crew and San Jose Earthquakes, but he had to take a job in the USL for each of the last two years in order to get another shot at the top tier. He had an excellent year with a historically good Phoenix Rising team in 2019, scoring a whopping 17 goals and attracting Atlanta United’s attention. Little did they know that he would play a big role early in the season.

Jahn is not, under any circumstances, Josef Martinez and it should be made clear that he isn’t expected to fill the same role as one of the most prolific goal scorers in MLS history.

Jahn is more of a target man. He’s the guy who will rise above defenders for a smashing header deep in the center of the penalty area. He will use his physicality to ram holes in a defensive line to create space for his fellow attackers. He’s certainly not a trickster and he’s not the type of player you want carrying the ball through a defense. Atlanta head coach Frank de Boer knows aware of this and he used him in the Cincinnati match in a way that allowed the two remaining heads of the South American monster to do the heavy lifting.

Just take a look at the opening goal. Pity Martinez collected the pass from Brooks Lennon and used the space given to him to get down low to the touchline. He had Jahn available right on the doorstep, but Martinez was never going to lay the ball off to him when Barco was storming into the penalty area, albeit with two defenders nearby. Jahn’s run served a different purpose. He pulled one of those two defenders with him, which allowed Barco to cut inside with only one man to beat, collect the cross from Martinez, and slide a shot into the back of the net.

This is the exact sequence that Atlanta United will probably try to recreate as often as possible as they navigate this new frontier. It’s probably a good thing they were able to use a fairly beatable team like FC Cincinnati as their guinea pig for this new game plan since things will be a lot different next week when they take on Club America in the Concacaf Champions League and as they progress through the MLS regular season playing against other contending teams.

Atlanta knew they wouldn’t be able to rush into the attacking third nearly as quickly as they’re used to without Martinez leading the line. To this end, they passed the ball around the midfield quite a bit as they probed a defensive minded FC Cincinnati for passing lanes and attacking options.

The result here was lots of possession with few, but usually effective, shots. The tactic worked well going forward because of talented midfielders finding those passing lanes to create opportunities. As an example, Pity Martinez had one of the most accurate long-distance ground passes you’ll ever see early in the game to pick out Barco on an attacking run. Emerson Hyndman and Brooks Lennon also showed great vision as they kept their eyes up field looking for any possible outlet to move forward.

A lot of pressure is going to fall upon the midfield without Josef Martinez on the field to provide an extra easy outlet going forward. Hyndman, in particular, but also Lennon and Jake Mulraney, will need to get creative with how they construct Atlanta’s attack. All three of them performed well on Saturday, but this was FC Cincinnati and not Club America or one of the other giants of the Eastern Conference.

Atlanta United will get plenty of chances to display young talent in this congested part of the season. The obvious inclusions in this match were Laurence Wyke, who left late in the first half with a head injury, George Campbell, who replaced Wyke and played effectively on defense, and Brazilian midfielder Matheus Rossetto.

Rossetto is this year’s young, exciting import from South America for Atlanta United. He has experience in the Copa Libertadores with Athletico Paranaense in Brazil and showed some skill with the ball during his substitute appearance on Saturday. He still needs time to acclimate to MLS, but once he does, he can be a valuable bench piece while starting a few games.

Frank de Boer (8.0): De Boer effectively deployed his reserve forward and responded well to a changing game in the second half. He allowed his team to evolve as FC Cincinnati probed forward and started to put pressure on his squad.

Brad Guzan (7.0): Guzan was not tested often, but he performed when called upon. He didn’t keep the clean sheet, but he can’t be held accountable for Yuya Kubo’s wicked swerving shot passing him by.

Anton Walkes (7.0) – Walkes played on the left side of a back three and didn’t allow much past him, but FCC also didn’t throw much his way.

Laurence Wyke (6.0) – It was a rather unfortunate first start Wyke, who was looking like a natural MLS player against FC Cincinnati. It was a shame that a head injury just before halftime ended his night early.

Fernando Meza (7.0) – The FCC goal was a result of miscommunication between the backline and the midfield when it came to marking Kubo, so Meza shares some of the blame for that. Otherwise, he had a solid game and he tightened up well at the business end of the second half.

Jake Mulraney (7.0) – He wasn’t as flashy as Atlanta’s wing back on the other side of the pitch, but he passed well and tracked back defensively to keep FC Cincinnati from hitting too hard along the right flank.

Eric Remedi (7.0) – He was an effective midfield shield that did well to regain possession on a few occasions and spray the ball to the more talented attackers in front of him.

Emerson Hyndman (7.0) – Hyndman was an effective presence in the central midfield during buildup and even got involved up front with a goal on a well placed shot.

Brooks Lennon (7.5) – Lennon sprayed the ball all over the pitch and made several dangerous crosses, effective long balls, and he tracked back defensively well.

Ezequiel Barco (8.5) – Barco had a goal and an assist while pretty much doing exactly what he needed to do without Josef Martinez available.

Gonzalo Martinez (8.5) – Much like Barco, Pity Martinez did what he had to do without a superstar in front of him. He created chances all night long and was Atlanta’s best attacking player until he was subbed off to save his legs for the CCL.

Adam Jahn (7.0) – Jahn barely touched the ball, but, as discussed earlier, this is exactly what he needed to do. He was more than just a decoy in the penalty area as he effectively created space off the ball for Martinez and Barco to work with.

George Campbell (6.5) – Campbell was thrown into the fire thanks to the injury to Wyke and he performed admirably. He didn’t communicate well when Kubo was left wide open for the FCC goal, but overall it was a stable debut for the 18-year-old.

Matheus Rossetto (6.5) – Rossetto came on in the second half for Pity Martinez and immediately showed some flair with the ball. He didn’t do all that much to help this game, but he looks to be a potential contributor to this attack.

Jeff Larentowicz (6.5) –  Larentowicz came on as a defensive solidifier and pushed the team back into a back four for the final ten minutes. He did what he needed to do and helped the Atlanta defensive unit tighten up to hold a one goal lead.