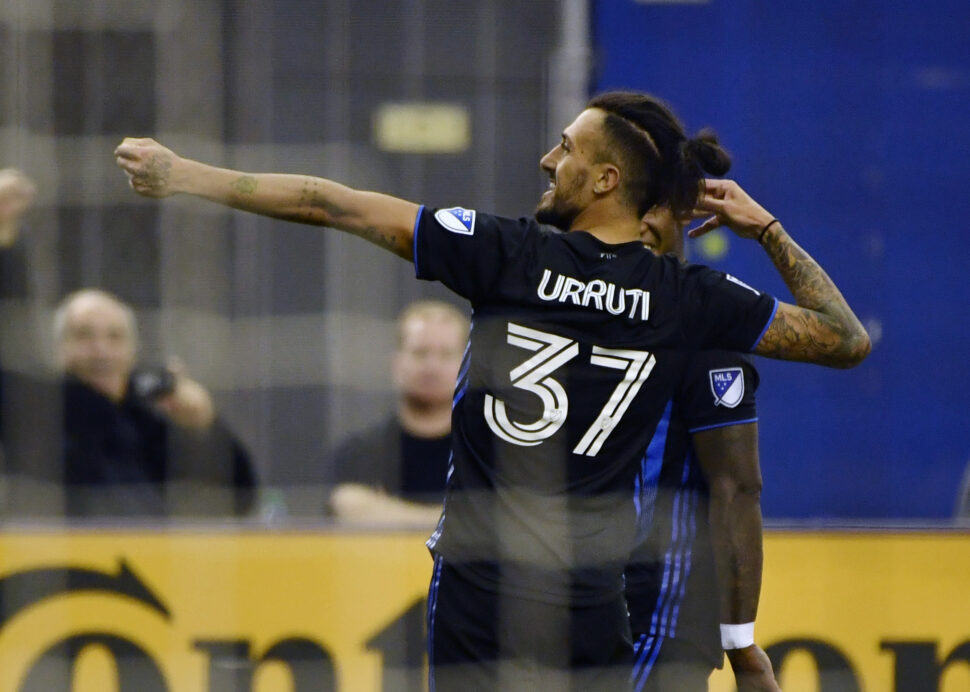 After dispatching Deportivo Saprissa in the Concacaf Champions League and besting the New England Revolution in their season opener, the Thierry Henry era is off to a great start in Montreal. While the Impact’s performance on the weekend was just enough to secure the three points, question marks remain.

Much like it was the case last season, the Impact switched off at times in the defensive third and looked vulnerable from dead-ball situations. Injuries to Rudy Camacho and newly-appointed captain Jukka Raitala have only made Henry’s job harder in the early goings of the season.

Regardless, the French tactician has adapted to the options at his disposal and is slowly setting the basis for a fluid formation. Against the Revolution, Henry maintained his back-five for the third game in a row and opted for a midfield duo of Saphir Taïder and Samuel Piette.

Unlike against Saprissa, however, the former Monaco boss instructed his wing backs — Zachary Brault-Guillard and Jorge Corrales — to get forward in support of the attack. In fact, the two fullbacks were often the side’s most advanced players and were regular outlets in the final third.

With the fullbacks overlapping in support of the front three, the Impact created overloads in key areas and created an abundance of scoring chances, as a result. Circulating the ball quickly from left-to-right, Henry’s men were able to release Brault-Guillard on numerous occasions on the opposing wing.

The 21-year-old finished the game with the most successful dribbles on the pitch and was a constant menace down the right-hand side. As the season wears on, it will be interesting to see the Canadian international’s involvement grow in Henry’s offense.

Defensively, the Impact suffered from the same issues that plagued the side last season and were regularly exposed from set-piece situations. Employing a zonal marking system, Henry’s men conceded the opening goal of the game from a well-worked kick after Teal Bunbury wriggled himself free from Luis Binks.

Had it not been for VAR ruling out Wilfried Zahibo’s go-ahead goal for offside, the Impact would have only themselves to blame. Yet again, Henry’s men went sleeping on set pieces and is definitely something the Impact manager will be pinpointing going into a crucial quarter-final against Honduran outfit C.D. Olimpia.

Since Henry’s appointment, Bojan has featured as the side’s main striker, but has struggled to make an impact in the final third. Typically fielded as a number ten throughout his career, the 29-year-old doesn’t appear to be the best fit for Henry’s system and was regularly outmuscled by the Revolution’s centre-backs on the weekend.

Moving forward, Bojan will need to be more direct with the ball at his feet or may risk a spell on the sidelines. The Spaniard is at his best when he roams freely between the lines and drops deep to receive.

Currently, Henry’s hybrid 3-4-3/5-2-3 doesn’t accommodate this type of movement regularly, which begs the question: Is Bojan the best fit to lead the line for the Montreal Impact? While it’s still early days, Bojan’s role under Henry is definitely something to keep an eye on.

Directness from the midfield

If you listen close enough in the Olympic Stadium, you can probably still hear Henry shouting at Taïder and Piette to play more direct from midfield. The duo had an indifferent first thirty minutes against the Revolution and often opted to play the safe pass back to the centre-backs, much to Henry’s dismay.

As the Impact gained control of the game, however, the duo gained more confidence in the middle of the park and spread the ball efficiently to the front-line. Last season, Montreal were often guilty of keeping the ball with no real purpose and lacked a cutting edge.

This season, Henry is looking to change this with immediate effect and is encouraging more risk-taking from his midfielders. It already paid off in their opener as Taïder’s over-the-top through ball found Urruti for the game-winning goal.

Clément Diop (6.5) – Making his third consecutive start on the season, Diop appears to have bested Evan Bush for the starting role this year. The 26-year-old picked up from where he left off against Saprissa in midweek, putting in a solid shift against the Revolution making crucial saves. While his command of his area was questionable at times, Diop led his side to victory without committing glaring errors.

Zachary Brault-Guillard (7) – The 21-year-old was lively throughout and did not give DeJuan Jones a moment’s rest. As Henry keeps emphasizing aggressive fullback play, expect Brault-Guillard’s importance to grow.

Joel Waterman (6) – Making his MLS debut for the Montreal Impact, Waterman was solid and did well to contain the Revolution’s offence in one-on-one situations. He almost cost his side the three points on a turnover, but overall, the former Cavalry defender was assured in possession and even chipped in with an assist on Romell Quioto’s goal.

Rod Fanni (6.5) – The veteran French defender has established himself as a crucial member to Henry’s back-line and looked extremely comfortable at the heart of defence on the weekend. Outside of marking the towering Adam Buksa out of the game, Fanni broke lines regularly in possession and built up play nicely out of the back.

Luis Binks (7) – The former Tottenham man followed up his impressive display against Saprissa with another quality performance. While the young defender lost Bunbury on the opening goal, Binks broke down the Revs’ attacks regularly and demonstrated his quality on the ball. Undoubtedly one to watch as the season progresses.

Jorge Corrales (6.5) – After signing from the Chicago Fire, many expected Corrales to be nothing more than a rotational player this season. Since Henry’s arrival, however, the Cuban has established himself as the Impact’s undisputed left-back and is enjoying the newfound freedom in Montreal’s fluid system. Much like Brault-Guillard, Corrales bombed forward with regularity and played a crucial role in the final third.

Samuel Piette (6) – The Canadian international started the game poorly misplacing easy passes, but bounced back quickly with an overall solid performance. Piette progressed the ball nicely in the second-half and provided some much-needed protection to the Impact’s back-line. With Victor Wanyama on his way, Piette will be eager to prove himself to his new boss.

Saphir Taïder (6.5) – The former Bologna man put in an accomplished display alongside Piette and covered significant ground in the middle of the park. Providing the assist on the game-winning goal through a wonderfully-lobbed through ball, Taïder will be hoping it’s the first of many this season.

Maximiliano Urruti (7.5) – An overall mixed bag for the Impact forward. Adapting to his new role on the right-wing, Urruti got forward nicely and did a good job creating space for himself in the opposition’s box. His lob will steal all the headlines, but the 29-year-old knows he could have easily finished the night with a hat-trick.

Bojan Krkic (5) – Deployed as a false nine, the Spaniard was a complete non-factor against the Revolution and was largely anonymous throughout. With Ignacio Piatti gone, many expected Bojan to pick up the slack in his absence. Let’s not panic yet, but the former Barcelona man is yet to deliver since joining.

Romell Quioto (7) –  The former Houston Dynamo man was electric in the home opener and scored his second goal on the season with a nicely-taken header. After struggling for consistency last season, it appears Quioto is enjoying a new lease on life under Henry.

Lassi Lappalainen (6) –  The speedy Finn was nearly through on goal with his first touch of the game, but failed to bring it down under pressure. One too many turnovers in his twenty-minute cameo.

Amar Sejdic (N/A) – Came on in stoppage time as a time-wasting tactic more than anything.

Shamit Shome (N/A) – Did not play enough minutes to have an impact, but finished the game at right-wing back. Will be hoping for more minutes moving forward.