Grading the Timbers: Compact defending, struggles up front, and more 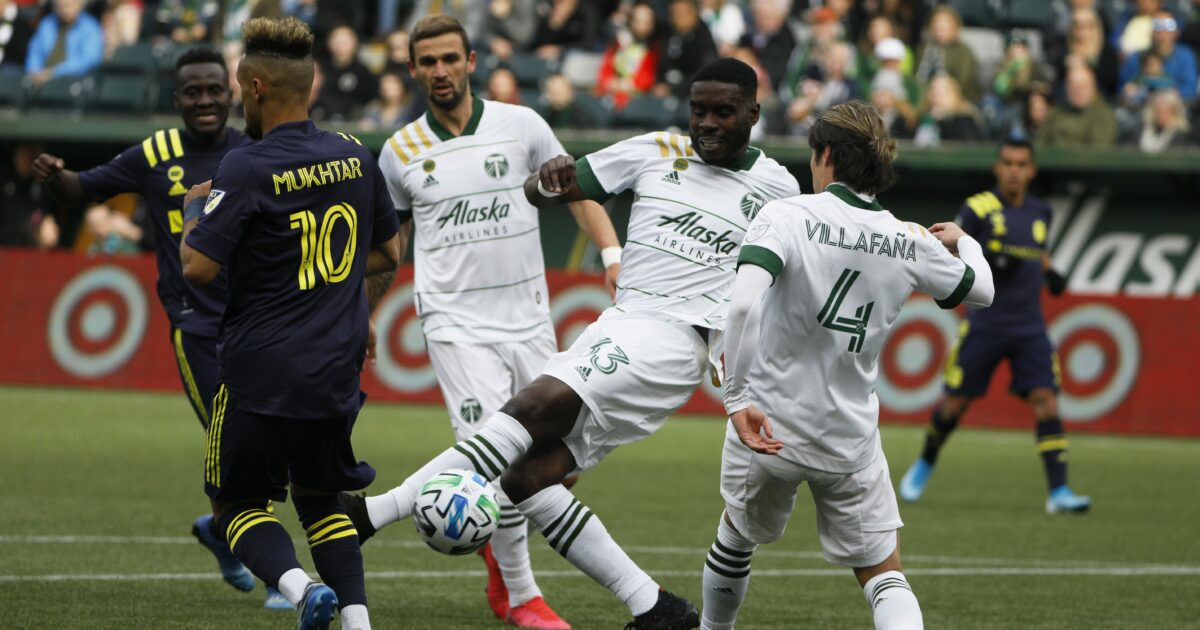 The Portland Timbers had two fatal flaws in their season opening loss to Minnesota United. First, they were horribly inefficient when taking shots. They launched 14 attempts in that match and many of them were low quality and hardly had a chance to make it into the net. Second, their defense was slow on transition and Minnesota exploited that by scoring two of their three goals on quick counterattacks with Portland defenders well out of position.

The Timbers did one thing to address both problems in their second match of the year against Nashville SC. They stopped caring whether or not they had possession.

It sounds strange to say that lowering the amount of time a team has the ball was a key factor in a victory, but it certainly helped the Timbers on Sunday. The main thing it accomplished was making sure the defenders didn’t make the same mistakes they made a week ago. Nashville didn’t counter in the same way Minnesota United did because they never truly had the chance. Portland was much more content sitting back and allowing an expansion team to come at them while central defenders Larrys Mabiala and Dario Zuparic commanded things from a more entrenched position.

The drawback to this was Portland had fewer resources pressing forward and it amplified their inefficient attack in many ways. They only took three shots on the night and it was impossible to account for how many crosses flew into the box to find either a Nashville head or the turf several yards behind its intended target.

Even the Diego Valeri goal featured a pair of misplaced crosses in the buildup. Jorge Villafana had a chance to pick out the Portland captain seconds before the goal but missed him completely. Thankfully for the Timbers, Andy Polo was in the right place at the right time to play an excellent header to set up Valeri’s half-volley finish.

Missed crosses were a theme throughout the game for Portland. Here’s a diagram depicting their woeful one successful cross compared to ten wayward ones, including set pieces. 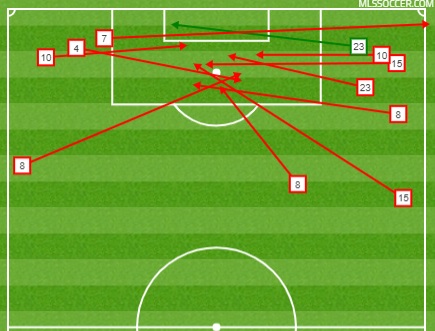 A diagram from last week when they were 2 for 16 on cross attempts wouldn’t look much different.

Giovanni Savarese would do well to reconsider his attacking plan on to focus on passing through the middle of the pitch where the team has a lot of skill in distribution. Andy Polo’s game illustrated how this could work quite well. The Peruvian was deployed as a central midfielder as opposed to his typical spot out on the right wing. This took a bit of his pace out of the game, but it allowed his non-crossing passes to flourish. He had the assist on the Valeri goal and was Portland’s most efficient passer overall.

Regardless of which central midfielders are in the starting eleven, the Timbers have the talent to pass effectively through the middle. Polo and Chara are capable, but so is Cristian Paredes, despite his more defensive nature. A layered passing game that works through that pairing to set up Valeri, who in turn either takes a shot or sets up one of the three forwards for opportunities in the penalty area is something the Timbers should be aiming to do going forward.

The main positive to come out of the underlying narratives from Sunday night was the much improved defensive structure. The Timbers didn’t press forward with Diego Chara or either of the central defenders, preventing Nashville from getting the chances to counter that Minnesota had last week.

It looked like the visitors were dominating the game for the vast majority of the second half, but the Portland defending made sure that they didn’t get enough dangerous chances to do anything with all that possession. They defended in two banks of four with Valeri chipping in from the front whenever he was needed. It was compact, it was structured, and it kept Nashville from scoring.

Savarese does have issues with depth at the moment, which makes it difficult to bring on subs that can impact the game in a meaningful way, but he is even struggling considering those restrictions.

He only made two subs in this game and both can be questioned. His first was bringing Cristian Paredes on for Diego Valeri in the 63rd minute with only a one goal lead. Paredes contributes more defensively, but the team was doing fine at the back without him and the attack was even more toothless once Valeri left the pitch.

Gio tried to counteract that lack of punch up front by brining Jeremy Ebobisse on for Yimmi Chara, but that created a sort of mish-mash setup up front with no real flow to what few attacks the Timbers created. Ebobisse and Felipe Mora can really only function as dual strikers in a 4-4-2 setup, which would have made sense if Gio hadn’t taken off his most effective attacking midfielder earlier in the game.

Gio Savarese (5.5-) – His initial game plan was spot on on Sunday, but he still needs to examine his in game adjustments. The subs were confusing and the team’s complete inability to get forward in the second half could have been solved with better planning at halftime.

Steve Clark (7.0) – Stood tall as Nashville sent lots of pressure forward. Made four saves in total, including one excellent game saving one on Anibal Godoy in the second half.

Chris Duvall (6.5) – Duvall had a solid Timbers debut at the back, but he was part of the issue going forward since what width he provided was rather ineffective.

Larrys Mabiala (7.5) – Mabiala was much improved this week thanks to a lower defensive line that kept him from having to scramble back to cover a counter attack.

Dario Zuparic (7.5) – Zuparic was able to communicate better with his defensive partner, which meant Nashville really never put together a real threat in the penalty area.

Jorge Villafana (6.5) – See the description for Duvall, because Villafana’s game can be summed up in basically the same way.

Andy Polo (8.5) – Polo provided the assist on the Valeri volley, but that was hardly his most impressive accomplishment on the night. No, that was his 33 for 35 passing efficiency that made Portland’s limited possession effective.

Diego Chara (6.0) – Chara did what he needed to do defensively and picked up his usual yellow card, but didn’t distribute well, particularly when it came to forward passing.

Diego Valeri (7.0) – His goal was most impressive and really didn’t get much help from the outside while trying to impact the game going forward.

Yimmi Chara (6.0) – Chara the Younger contributed more on defense than Blanco did from his wing position, but he was still a non-factor up front and it helped keep the Timbers pinned on one goal.

Felipe Mora (6.0) – There really wasn’t much he could do without his attacking midfielders producing much behind him.

Cristian Paredes (6.5) – Came on late in the game to provide a second defensive presence in the midfield and did exactly that, despite it not being the best idea from a tactical perspective at the time.

Jeremy Ebobisse (6.0) – Ebobisse was brought on for Yimmi Chara late in the game and it’s hard to see why.