The Montreal Impact suffered their first loss of the Thierry Henry era on Tuesday night, falling in the first leg of their Concacaf Champions League quarterfinal against Honduran side C.D. Olimpia.

Saphir Taïder’s second-half wonder-strike cut the deficit to one, but ultimately, lapses in concentration costed Henry’s men. The Impact now face an uphill battle going into the second leg in San Pedro Sula.

The Impact poured men forward in an attempt to level the scores immediately and employed a high-line against Olimpia’s deep block. Despite dominating large spells of possession, the next goal fell to the visitors.

The Hondurans broke dangerously on the counter after Samuel Piette’s volley was blocked off a corner. After receiving the ball from Bengtson, Jorge Benguche glided past Zachary Brault-Guillard and doubled his side’s lead with a well-taken finish on the stroke of half-time.

“We committed two schoolboy errors,” said Henry. “They didn’t open us up at any point. We knew they were going to be direct and they were.”

Henry introduced winger Orji Okwonkwo for Brault-Guillard after the restart and shortly thereafter, his courage was rewarded. Just one minute into the second half, Taïder cut the visitors’ lead in half with a weak foot volley from thirty yards out. “It was one of my nicest goals. It’s a very nice goal, but it’s only one,” said Taïder. “We have to keep our head high and believe in ourselves. It’s the Champions League, we have to fight until the end.”

The Algerian’s effort was ultimately not enough. “A game is played over ninety minutes, not forty-five,” said Henry. “We can’t concede those goals, two of our players jumped for the same ball, but we have ninety minutes to turn it around.”

The Impact’s pressure nearly paid off after referee Adonai Escobedo pointed to the spot for a suspected handball late in the second half. Escobedo quickly overturned his initial call after consulting with the linesman and instead awarded the Impact a corner. Despite the call, Henry puts the onus on his men to be better. 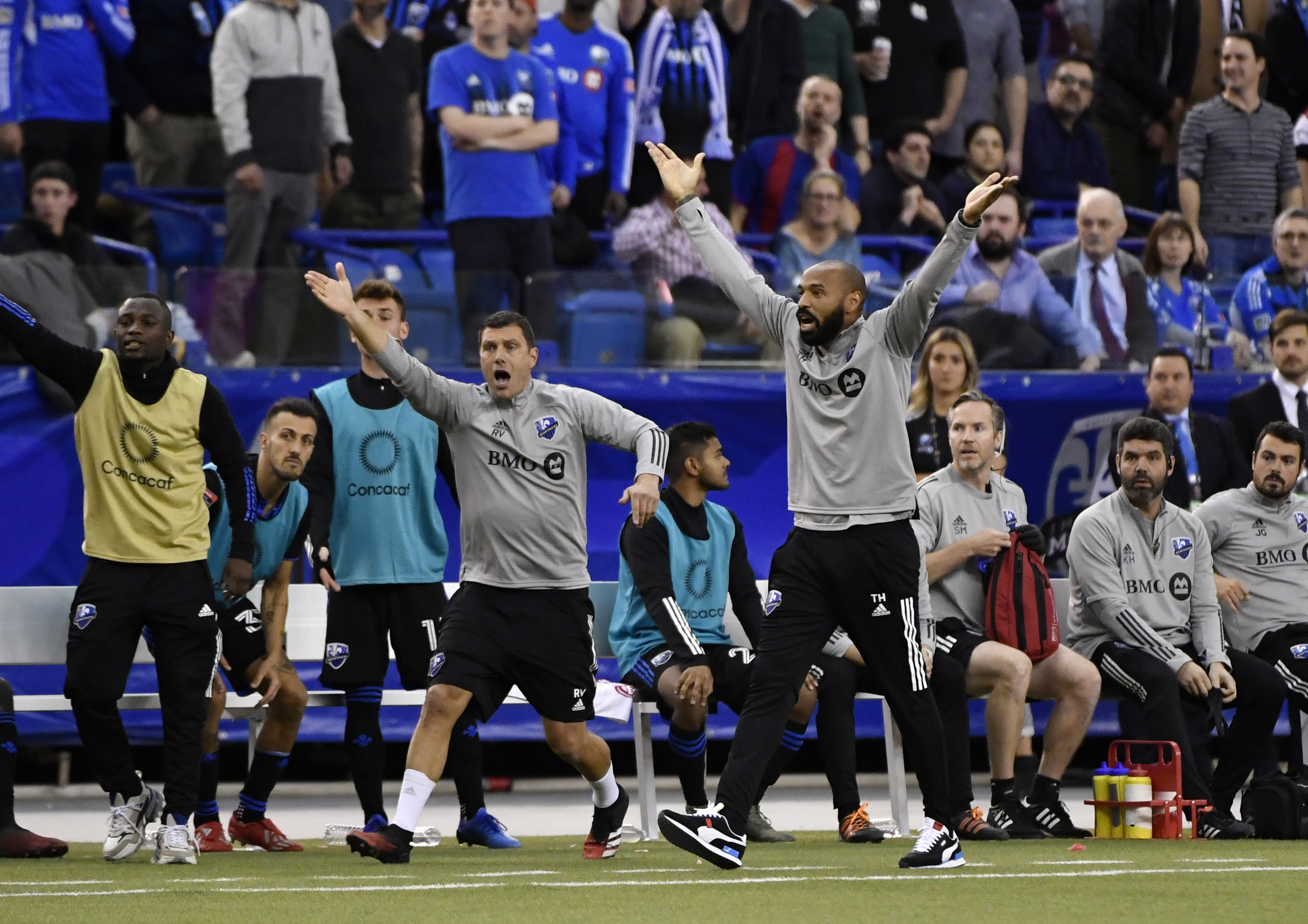 “When you look at their goals, one is from a long-ball while the other is from a counter-attack on our corner. You can’t win a game committing these mistakes,” said Henry.

Henry’s men will head into Honduras next week, needing at least two goals to overturn the result. Once again, the Impact’s Jekyll and Hyde performance will leave their tactician scratching his head. In their first five games of the season, the Impact have already surrendered a two-goal lead twice and have demonstrated a tendency to start games slowly as was the case against C.D. Olimpia.

“Like I’ve said after the games against Saprissa, FC Dallas and New England, we have to play ninety minutes. We’re slowly progressing, but have to be better over both halves,” said Henry.

The French tactician, however, maintains side are very much a work in progress. “We’ve played together for five games. You’re starting to see recurring movements in our play,” said Henry. “We have to keep making progress.”

The Impact won’t have much time to regroup and will be traveling to Honduras later this week ahead of their clash at the Estadio Olímpico Metropolitano. The all-important second leg would be a good time for Henry’s men to put in their first complete performance of the season. After all, a berth in the semifinal depends on it.