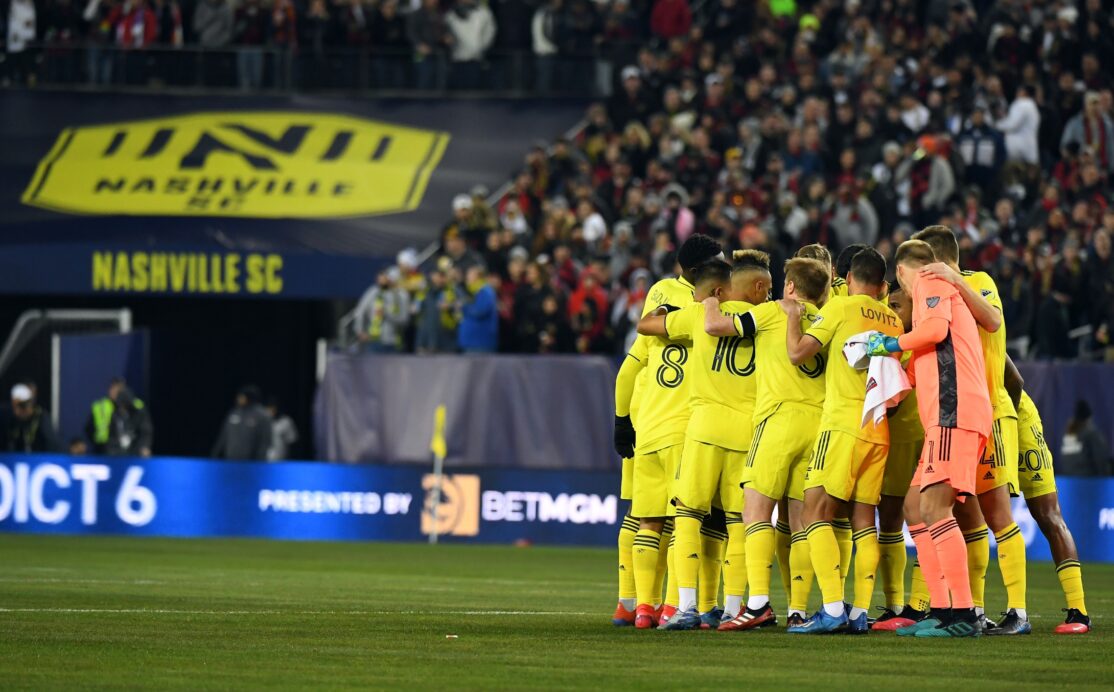 2020 Expansion side Nashville SC was welcomed to MLS life to the tune of 59,000 people at its temporary home Nissan Stadium on Saturday, where it fell 2-1 to Atlanta United.

“If we get support like that every week, we’re going to be really good,” Nashville Midfielder Dax McCarty said.

Despite not earning a result, it certainly wasn’t a disastrous showing for Nashville.

“As far as the occasion goes, and we couldn’t have asked much more. The fans that supported us, the atmosphere that was created, the opportunity for the players to perform in such a great environment,” Nashville head coach Gary Smith said. “It was a competitive game and there was a terrific football from both sides, I feel,”

“If there’s a way of creating that week in and week out, I’m sure it will be a massive asset for us.”

Walker Zimmerman got one important thing out of the way for the new franchise though, the very first MLS goal when he finished off a corner opportunity set up by Hany Mukhtar.

“We had a set-piece, I knew Hany [Mukhtar] had some really good service. Wanted to be really aggressive with it with the near post run. I got up with [Josef] Martinez, and we both kind of headed it off each other, and it fell down,” Zimmerman said. “Just trying to instinctively get a foot on it and a toe poke getting it by Brad [Guzan].”

After conceding early from a mistake on the counter, the team was overcome with emotion as it found itself back in the game a few minutes later, and Zimmerman didn’t excuse himself from indulging in the joy of etching his name in team history.

“I almost always freak out when I score. I always think before the
game, of having some preconceive a celebration or thing. Normally, I just scream or run around and stare at my teammates and it never goes as planned.”

For the Atlanta-born Zimmerman, the night was extra special, apart from the goal.

“It’s bizarre. Because even growing up, it’s wasn’t watching MLS too much because, you know, there wasn’t any games to go to,” He said. “The league certainly changed, the landscapes changed. We’re getting a lot of star power coming into the league, the overall quality of the bottom of a roster player now is way higher than it was 10 years ago and certainly competitive, and so to have Nashville vs. Atlanta in 2020 in front of 60,000 – I mean, that’s an amazing accomplishment and achievement, and something I’m happy to be a part of,”

The winning goal from Atlanta was a bit controversial, as the Nashville defense slowed down when the assistant referee held up a flag on a near-goal opportunity.

Ultimately the play wasn’t stopped and Atlanta United midfielder Emerson Hyndman smashed in the gift of an opportunity, handing Nashville a hard lesson as the play stood between it and earning a point at home against one of the tougher opponents it’ll meet in the inaugural season.

“She put her flag back down after probably two or three seconds and then, you’re kind of like scrambling, like  ‘oh crap, what’s going on
right now?’ The ball bounces around and cleared out and look Emerson Hyndman has a fantastic goal, right? I think maybe if we don’t pause for two or three seconds, we can eliminate that. It’s disappointing, it’s a lesson to be learned for us because you have to play to the whistle.” McCarty said.

The end of the game saw Nashville marauding Atlanta for an equalizer, but the visitors stood sturdy chance after chance.

“We looked as I said, competitive, well organized, and it was difficult
for them to break lines. But as soon as they did, there was a change of gears and before you know it you’re one-nil down and I think that’s what we have to take on the chin, “Smith said. “We’ll learn from it, there’s a lot of growth still to come in this group. The disappointment for me is that we haven’t been able to capitalize on one or two very decent moments to get something out of the game.”

There’s definitely some pride Nashville fans can take from the game, as holding Atlanta to only two goals will prove do be a difficult task for a handful of teams this season.

The team will play its next two games in Portland and Toronto before returning home to face the Columbus Crew on March 21.