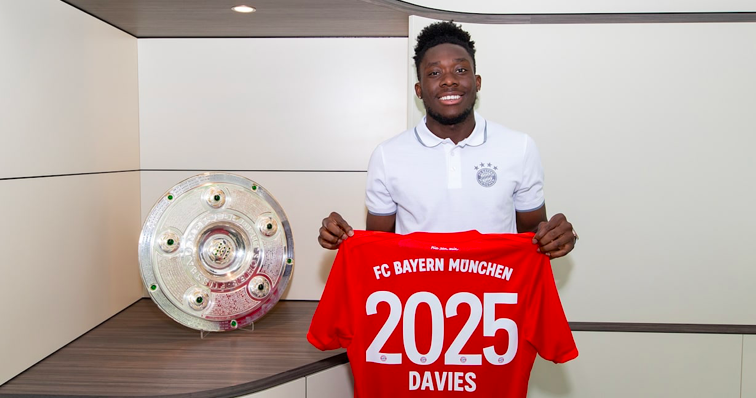 Alphonso Davies’ strong season with Bundesliga leaders Bayern Munich was rewarded by the club on Monday.

The club announced that Davies has signed a two-year contract extension, keeping him under contract until June 2025. Davies joined Bayern Munich from MLS’ side Vancouver Whitecaps in the Fall of 2018 and since has risen to a starting role in the first team.

“I am very happy,” Davies said in a club statement. “FC Bayern is one of the best clubs in the world, and for me it’s a dream come true to play here. I felt happy from day one. I want to win as many titles as possible with this club. The mentality of always wanting to win everything is in FC Bayern’s DNA.”

Davies impressed in his final season with the Whitecaps, scoring eight goals and adding nine assists in 31 league appearances during the 2018 season. He joined Bayern in a move worth $11 million and split time last season with the first team and the Under-23’s.

He scored one goal in six league appearances, earning a winners medal after Bayern lifted both the Bundesliga title and German Cup. 2019 has seen Davies make the starting left back role his, totaling 31 appearances in all competitions while scoring once and registering eight assists.

“Alphonso has developed very well at FC Bayern and has earned this contract extension with his impressive performances,” Bayern CEO Karl-Heinz Rummenigge said. “We are happy that he will remain with FC Bayern in the long term. He delights our fans not only with the way he plays, but also with the way he is off the pitch.”

Davies has continued to be the face of the Canadian Men’s National Team as well, scoring five goals in 17 appearances. He helped John Herdman’s side to a 2-0 Concacaf Nations League upset win over the USMNT in September 2019, a first for Canada in 34 years.

Prior to the postponement of the Bundesliga season, Bayern were four points clear of second place Borussia Dortmund. Hans-Dieter Flick’s side also advanced to the quarterfinals of the UEFA Champions League and were due to face Eintracht Frankfurt in the German Cup semifinals.