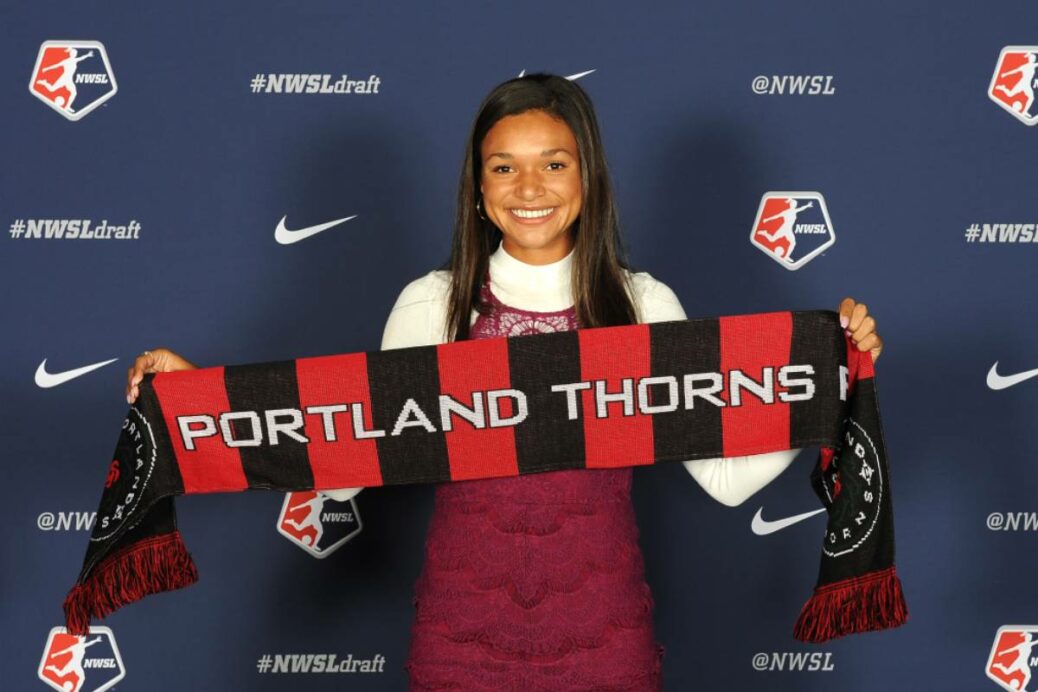 Amid one of the most dominant runs in sports history, it’s no secret that the U.S. Women’s National Team will be looking for new faces to sustain momentum for years to come in the freshly-minted Vlatko Andonovski era.

To see how deep the well of talent goes, 19-year-old Stanford University product and newly installed Portland Thorn Sophia Smith has already been plugged into the system, getting her first senior USWNT call up three years ago. The time since has seen her become an NCAA National Champion, steady goal scorer in the USWNT youth ranks, and subsequently the youngest-ever National Women’s Soccer League first-overall draft selection.

Even with the accolades, the choice to make the jump to professional life at such a young age with two years of NCAA eligibility still in hand was thorough and careful. Ultimately, the opportunities for Smith’s taking in the near future were too good to pass up.

“I wouldn’t say there was one specific thing, but I think it was kind of accumulation of things that I was thinking about. Talking to different people, knowing my options, knowing the circumstances if I did this versus that,” Smith told SBI. “I think at that moment when I decided, it was solely just me following my heart, and just my gut instinct telling me that this is what I’m supposed to do.”

The ever-tempting gamble was justifiable, and paid dividends almost immediately regarding her initial landing-place. Leading up to the draft, the Portland Thorns paid a comprehensive package headlined by USWNT regular Emily Sonnett to take the pick from Orlando Pride, and Smith was the obvious target in mind.

Suiting up for the Thorns is an enviable position for any incoming NWSL player. Providence Park is the year-over-year league leader in terms of attendance, the team is a perennial playoff heavyweight, but working with talented stars such as Tobin Heath, Lindsey Horan, and Christine Sinclair among others in the cast might be the biggest benefit that comes with the territory.

For Smith, it means calling some of her heroes co-workers.

“I’m really excited to play with all of them, the whole team, regardless of if they have the big name or not, I think that there are so many different qualities on this team and I’m so excited to see how I fit in with that,”

The opportunity to work with Heath stands out as something extra special, though.

”I think for most young girls who play forward, she’s one of their idols growing up because she’s just different. You don’t see anyone like her. What she can do with the ball is something that I’ve always admired about her and tried to bring into my game,” She said.

Albeit in a much closer capacity these days, it isn’t her first time working up-close with one of her idols.

“The last national team camp I went to, she was there,” Smith said.

“I do remember one time during practice when she was out resting some injury and she was helping me individually with my positioning on the field when we were working on defending shape. I remember playing the seven at that camp, and with her playing the seven, she was so invested in helping me and showing me the little details. I’ve had a few conversations with her. She text me when I got drafted and said ‘Congrats and welcome to the team’ So, she’s just been awesome,”

Getting her first reps with the senior team at 16-years-old groomed Smith to be ready to take these opportunities on as a professional. Too, it gave her a barometer of what it takes to earn staying power in the squad when the time comes.

“It gave me a whole new perspective of what that team is really about and what it really takes to make that team, stay on that team, and earn the respect of the fans of the United States,”

Something that bodes well for Smith is already having developed a positive relationship with Andonovski. Looking ahead to the 2023 World Cup, the stars could align for her to be one of the focal points of the USWNT’s bid for a three-peat on the highest stage.

“I like Vlatko a lot and have an immense amount of respect for him, he’s been doing amazing things with this team and every time I get to go in with them it’s it’s such an amazing experience and I learn so much from him,”

“And we have had conversations and talk about goals and dreams and where I want to be, and obviously, making the World Cup team, making the next Olympic team, those are goals on my own I’ve had for myself for a long time, and it’s something that I want to do whether that’s the next Olympics, the next World Cup, or the one after that.”

It’s comforting to be a known commodity in the USWNT system, but the road ahead for Smith is establishing herself in NWSL play. In her Stanford days, she scored at a clip of 24 goals in 33 appearances and showed a flair for the big moment that included a hat trick in the semi-final of the eventual 2019 National Championship campaign.

The Thorns are stockpiling quality scorers, but it’s warranted.

After slipping from champion to runner-up, to semi-finalists in the last three seasons respectively, Smith has a real opportunity to be a difference-maker for the league’s most prominent franchise. In addition to moving up to grab her with the first pick, Portland traded up to get forward Morgan Weaver from Washington State University with the second-overall selection.

“We’re both young, we’re both rookies, so she’s definitely someone who I think I’ll end up being super close with throughout the years of playing for the Thorns,” Smith said.

Having another rookie with high expectations offers a natural bond of sorts, in addition to increasing competitiveness within the unit. In an effort to avoid any further downward slipping, Portland head coach Mark Parsons now has a glut of talent in the attacking end which should help the team tremendously, but earning minutes could be present a challenge for the newcomers.

“It’s hard to know until we really get the team together and start training together and build a team culture on the field and just see where everyone’s best fit is, but I have talked to Mark and I think he has big plans for this team. So, I’m just excited to be a part of it, wherever that may be,”

In what’s primed to be a breakout year for Smith and company, the show is on hold due to the novel coronavirus.

Prior to the global shutdown, Smith was training with the USWNT Under-20 squad in the Dominican Republic and hadn’t had a chance to fully immerse herself in the Thorns’ locker room. It hasn’t stopped the Colorado native from thinking big though. In the face of uncertainty of when she’ll get the opportunity to continue her rise, the expectations she has for herself remain top-of-mind.

“Ideally, I’d love to be this young and play in the Olympics, in a World Cup, and start my journey this early if that’d be the way it goes. But if it’s not, and it takes more time than expected or wanted, it’s still gonna work out some way or another,” she said.

The NWSL’s current training moratorium goes through May 15th. Should soccer resume in the summer, Smith’s ongoing story will be one to watch.

“I’m patient, but you know, I’m also determined. I’m also anxious. I have big goals and dreams for myself and I don’t think there’s anything wrong with aiming too high because – why not? Why not be 19,20 years old and play in the Olympics in 2021? So that’s the kind of attitude that I have for myself.”