We carry on with another one of the original MLS franchises, the Colorado Rapids.

The Rapids have one major trophy in their history. They earned it when took down FC Dallas 2-1 in extra time in the 2010 MLS Cup Final. They have also played in one other MLS Cup Final and a single U.S. Open Cup Final, where they have the somewhat dubious honor of being the team that lost a final to the last non-MLS team to win the competition.

Many greats on both sides of the ball have worn burgundy over the years, though. The Rapids hit their peak in 2010 when they lifted the MLS Cup thanks to the goal-scoring prowess of Conor Casey and Omar Cummings. They made it to the second-ever MLS Cup Final thanks to the strong defending of Marcelo Balboa. 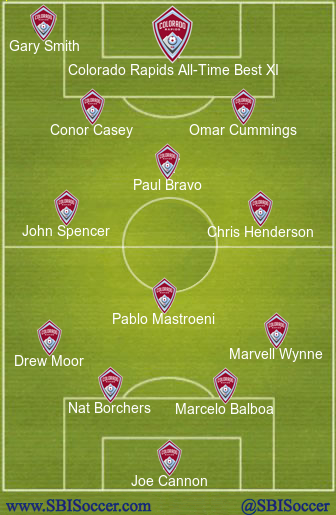 Cannon was the Rapids fulltime goalkeeper from 2004-2006. His 2004 campaign earned him MLS goalkeeper of the year thanks to a team record 10 clean sheets in 30 regular season games. Overall, he had 25 shutouts over three seasons with the Rapids.

The Rapids traded for Wynne at the start of the 2010 season and he was a major reason the team ended up winning the MLS Cup that year. They converted him from right back to central defense and he went on to start regularly over the course of the next four seasons.

Balboa was a member of the original Colorado Rapids team in 1996 and he went on to play more than 150 games in their back line. He helped them to win the Western Conference in 1997. Balboa was inducted into the National Soccer Hall of Fame, thanks to his efforts with the Rapids and his lengthy career with the U.S. Men’s National Team.

Borchers went undrafted in 2003, but he signed for the Rapids thanks to his experience with their affiliate in the Premier Development League. He quickly defied his lack of draft stock by becoming a regular starter for Colorado right away and for each of his first three seasons in the league before trying is hand overseas.

Moor spent seven seasons in Colorado, playing in 181 games, second most in club history. He played in every minute of the 2010 MLS Cup run, which was also part of an MLS record breaking 68 consecutive 90-minute games. He captained the side from 2013-2015, before leaving as a free agent.

Nobody has played more games for the Rapids than Pablo Mastroeni. He came to the team after the Miami Fusion were contracted in 2001 and went on to play more than 200 games for the team. He was their captain for the 2010 title and went on to coach the team from 2014-2017, leading them to the Western Conference Final in 2016.

Rapids was not only a member of the original Colorado Rapids in 1996, but he was also the first team MVP. He started 29 games in that opening campaign, providing eight assists. He left the club after 1998, but he returned in 2002 after the Miami Fusion disbanded and went on to play 91 more games in Colorado before departing in 2005.

Spencer came to Colorado in 2002 after a long career in England and Scotland. He announced himself to MLS with authority, scoring 12 goals in his first season as the Rapids progressed to the Western Conference Final. Injuries hampered his two other three seasons, but he still managed to score 37 goals in 88 MLS games.

Paul Bravo was one of the first prolific scorers in Rapids history. He came to the club in 1997 and went on to play five seasons with the club, scoring 44 goals. He also was the club’s technical director from 2009 until 2017, helping build the team that won the 2010 MLS Cup.

Conor Casey is the club’s all time leading goal scorer with 50 over six seasons with the club. He arrived in 2007 after a long career in Germany and had three straight 10+ goal seasons from 2008-2010. He scored 13 times in the 2010 MLS Cup run. He also served as interim head coach during the 2019 season, winning seven games.

The Rapids took Cummings in the third round of the 2007 MLS Draft and he went on to do very well for such humble beginnings. He played 149 games in burgundy, scoring 39 goals, second only to Conor Casey in club history. He was the leading scorer for Colorado during the 2010 run with 14 goals.

A former scout for Arsenal, Smith came to the Rapids in 2008 as an effort to forge a relationship between the two clubs under the ownership of Stan Kroenke. Smith took over the coaching role in November 2008 and helped lead the team to the 2010 MLS Cup title. He was dismissed after the 2011 season with a record of 45-37-40.