If there is a team that has been the golden standard through Major League Soccer’s first 24 years and change, it is probably the LA Galaxy.

Holders of a record five MLS Cups and a league original, the Galaxy have established a winning tradition that very few teams in MLS can rival. The club has competed for trophies literally from the onset, creating a successful history that has made the Galaxy among the most-well known MLS teams around the world.

What’s more, the Galaxy have done all that with a good dose of star power on the books. Whether it has been an English icon or American legend helping to lead the charge, the Galaxy have been synonymous with the alluring glitz and glamour that the city of Los Angeles craves and is known for.

Establishing a criteria for All-Time XIs is not a simple task, but for some insight into the process SBI used to select these teams, you can read our primer on the process. 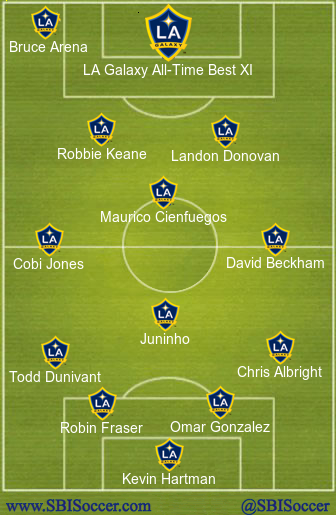 An MLS original that spent a decade with the Galaxy, Hartman helped the club to its first two MLS Cups, a pair of Supporters’ Shields, a couple of U.S. Open Cups, and a CONCACAF Champions’ Cup. Hartman also earned MLS Goalkeeper of the Year honors in 1999, was named Galaxy MVP in 2003 and 2004, and made a whopping 243 appearances.

His six seasons in LA were full of highs, including capturing multiple titles and earning an MLS Best XI nod. Acquired via a trade in 2002, Albright won his first MLS Cup and a Supporters’ Shield as a member of the Galaxy that year before winning the league’s grand prize again three seasons later. The right back also claimed a U.S. Open Cup and was name to the league’s best team in 2005.

The towering centerback was a dominant Galaxy staple essentially from the moment he was drafted in 2009. He played a vital part in the three MLS Cup titles the team won from 2011-2014, even winning MLS Cup Final MVP in 2012. Gonzalez racked up several other collective and individual accolades during his stellar seven-year stint in LA, including MLS Rookie of the Year in 2009, MLS Defender of the Year in 2011, two Supporters’ Shields, and four MLS Best XI selections.

Another of the Galaxy’s originals from 1996, Fraser enjoyed a strong run with the franchise that lasted five seasons. The central defender helped the Galaxy reach a pair of MLS Cup Finals in that span — though they did not win either — and lifted the 2000 CONCACAF Champions’ Cup. From a personal standpoint, Fraser was named MLS Defender of the Year in 1999.

A standout left back and a proven winner, Dunivant helped the Galaxy hoist four MLS Cups during his two stints with the club in addition to a U.S. Open Cup and two Supporters’ Shields. He also had an MLS Best XI nod in 2011. In total, he played nine seasons in LA before retiring as a member of the Galaxy.

The Galaxy of the 2010s were known predominantly for their attacking star power, but Juninho was a vital presence in midfield that shored things up defensively for much of the decade. The energetic Brazilian spent seven years with the Galaxy over the course of multiple stints, winning three MLS Cups and two Supporters’ Shields. He was also named to the MLS All-Star Team in 2015.

There is a reason the iconic Englishman became the first MLS player to have a statue built in his honor. Beckham was more than just the popular face of the franchise and league during his high-profile stay in LA, delivering pinpoint passes and set pieces to help lead the Galaxy to a pair of Supporters’ Shields as well as back-to-back MLS Cups in 2011 and 2012. The midfielder also earned three MLS All-Star Team nods and one MLS Best XI honor in 2011, all while helping to catapult both MLS and the Galaxy’s popularity.

A skillful and savvy attacking midfielder that was around from the birth of MLS in 1996 until 2003, Cienfuegos won practically everything with the Galaxy. His seven years in Los Angeles saw him claim the team’s first MLS Cup in 2002, a CONCACAF Champions’ Cup, a U.S. Open Cup, two Supporters’ Shields, and three MLS Best XI honors. The Salvadoran retired as a Galaxy player, one that finished with an impressive haul of 35 goals and 80 assists.

He was an MLS original that spent his entire league tenure with the Galaxy, setting a team record for appearances and racking up more than a half-dozen trophies in the process. Jones’ 12 campaigns saw him finish with a pair of MLS Cups, U.S. Open Cups, and Supporters’ Shields in addition to the 2000 CONCACAF Champions’ Cup. His 306 regular season games played are still the most by a Galaxy player until this day and he is third all-time on the team’s top goal-scorers list.

The U.S. Men’s National Team legend is also a Galaxy great. Having spent 11 season with the franchise, Donovan was a massive piece of the Galaxy’s success with his ability to both create and score. He currently holds the records for most goals (113) and most assists (107) in team history, and has four MLS Cup and two Supporters’ Shield titles from his days in LA. On an individual level, Donovan was also named MLS MVP in 2009 and earned MLS Best XI honors six times as a Galaxy player. He claimed the 2011 MLS Cup MVP and 2008 MLS Golden Boot awards, too.

Championship teams tend to have a lethal striker up top, and Keane was precisely that for the Galaxy of the early 2010s. The Irishman joined the Galaxy in 2011, and immediately helped them to two consecutive MLS Cups and three in four years with his goal-scoring prowess. Keane’s six seasons in Los Angeles saw him net 83 goals while assisting on 45 others in league play, and he earned MLS Best XI Honors for each season from 2012 through 2015. He also raised a Supporters’ Shield in 2011 and won both the MLS MVP and MLS Cup MVP awards in 2014.

His nine seasons in charge were littered with championships, and he was able to successfully manage big personalities like Beckham, Keane, and Donovan simultaneously. Arena left the Galaxy after nearly a decade with three MLS Cups, two Supporters’ Shields, and two MLS Coach of the Year awards won in 2009 and 2011.