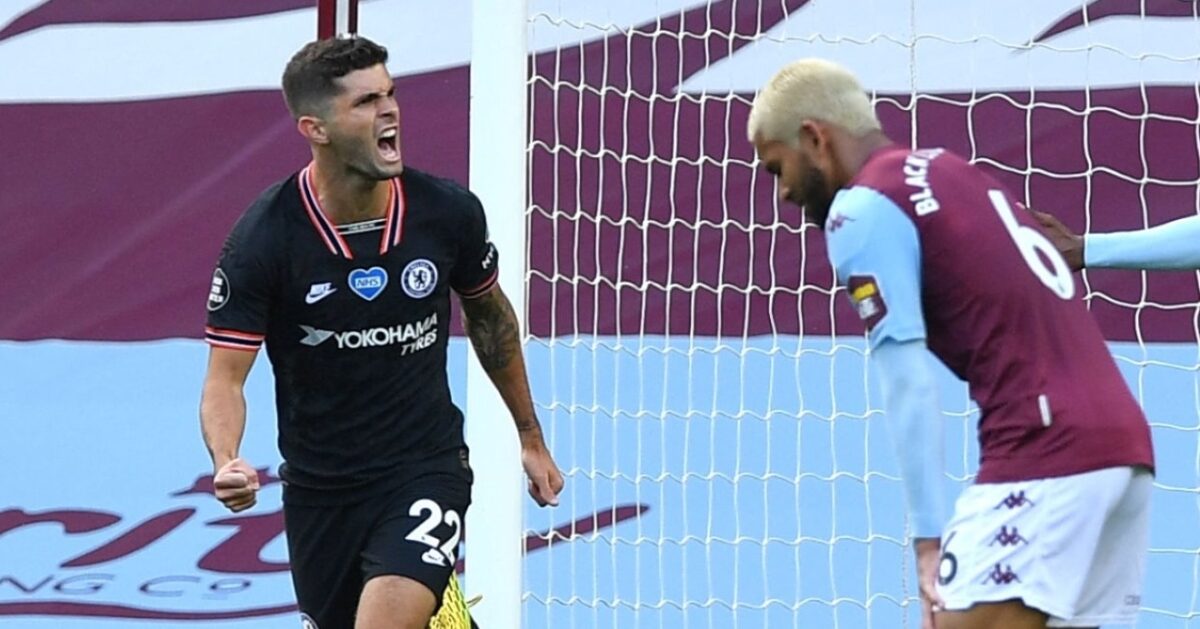 Christian Pulisic returned to the headlines for Chelsea after injuries kept him out for all but one game in 2020 and his manager is certainly happy to have him back.

The American superstar came on as a second half substitute and waited less than five minutes before tying the game with his sixth Premier League goal of the season and first since November.

The goal was a true display of one of Pulisic’s main midfield talents: his ability to make runs off the ball and create space for himself in threatening areas. In this instance, Pulisic saw space at the back post and booked it to make it onto the end of Cesar Azpilicueta’s cross before volleying it into the back of the net with his left foot.

It was one of the finer goals of Pulisic’s career. It took awareness to notice the Aston Villa defenders turning away from him and speed to get into the dangerous spot. It took coordination to locate the cross and latch his foot onto it for an impressive finish.

The move impressed Frank Lampard, who praised Pulisic’s off-ball movement and promised that we will see more of him during this hectic sprint to the end of the Premier League season.

“There is a difference between being a very good attacking player off the side or the players at the real top level of the game who arrive and score in the six yard box and hit big numbers yearly,” Lampard said after the game. “I really think Christian can do that. I was really pleased with him and the impact he had when he came on. He will start games for us, of course, and I think he’s going to be a big player for us. Not just in this run-in but obviously going forward.”

Pulisic’s strong performance was about more than the goal. His long passing was on target and he managed to take a pair of other shots during his 35 minutes on the field. He also contributed defensively as Villa attempted to get a late equalizer.

“I’m really glad that I could come in and help the team in any way I could. Luckily today it was with a goal,” Pulisic said.

“I don’t think I hit it perfect with my left. Luckily I got enough on it just to steer it on target.”

Pulisic was just rounding into form when an abductor injury derailed his debut season at Chelsea. His last game before Sunday was on New Year’s Day, when he went 66 minutes against Brighton & Hove Albion. The injury was thought to be minor at the time it turned into one of those nagging knocks that are difficult to truly recover from.

It’s hard to say that a global pandemic can help anyone, but Pulisic benefited from the hiatus. It allowed him the time to get healthy in order to come back for the final leg of the season as the Blues chase a Champions League spot next season.

“I felt for him, as I’ve felt for the players with long-term injuries,” Lampard said. “Ruben [Loftus-Cheek] is in the same position. I know Christian was very hungry. He’s trained well and the ability he has got to arrive in the box, it is a big thing I’ve spoken about with him about all season.”

Lampard’s praises are hardly necessary when it comes to assessing the need for Pulisic to make in impact in the next month. Chelsea, as any club competing for a European place in this unprecedented environment, will need all the depth they can muster if they want to hold onto a top four position.

It’s a situation that would have given Pulisic plenty of playing time anyway, but taking only five minutes to score a crucial equalizing goal after your team scuttled along the Villa Park pitch for 55 minutes will go a long way towards ensuring that extra playing time leads to something consistent when the league returns to a more normal schedule.