Almiron scores in second-consecutive match, season total up to eight 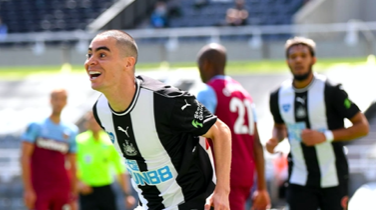 Miguel Almiron continued his fine run of form with Newcastle United on Sunday after scoring in the second-straight match.

The former Atlanta United playmaker helped the Magpies to a 2-2 draw with West Ham United at St. James Park. Almiron equalized for Steve Bruce’s men in the 17th minute after West Ham had taken an early advantage.

Great build-up play from the Magpies eventually saw Emil Krafth’s low cross driven home by Almiron. It was the Paraguayan’s fourth league goal of the season and eighth goal in all competitions after bagging four goals in FA Cup play.

Tomas Soucek and Jonjo Shelvey traded goals in the second-half, but both teams had to settle for a point apiece.

Almiron has arguably been Newcastle’s best player this season, continuing to rack up first-team minutes in his second season in England. The 26-year-old has made 32 league appearances for the Tyneside club, playing in a bunch of positions.

The Magpies are currently 12th in the EPL table, 15 points clear of the relegation zone with five matches remaining. Up next for Almiron and his teammates is a trip to Manchester City on Wednesday.