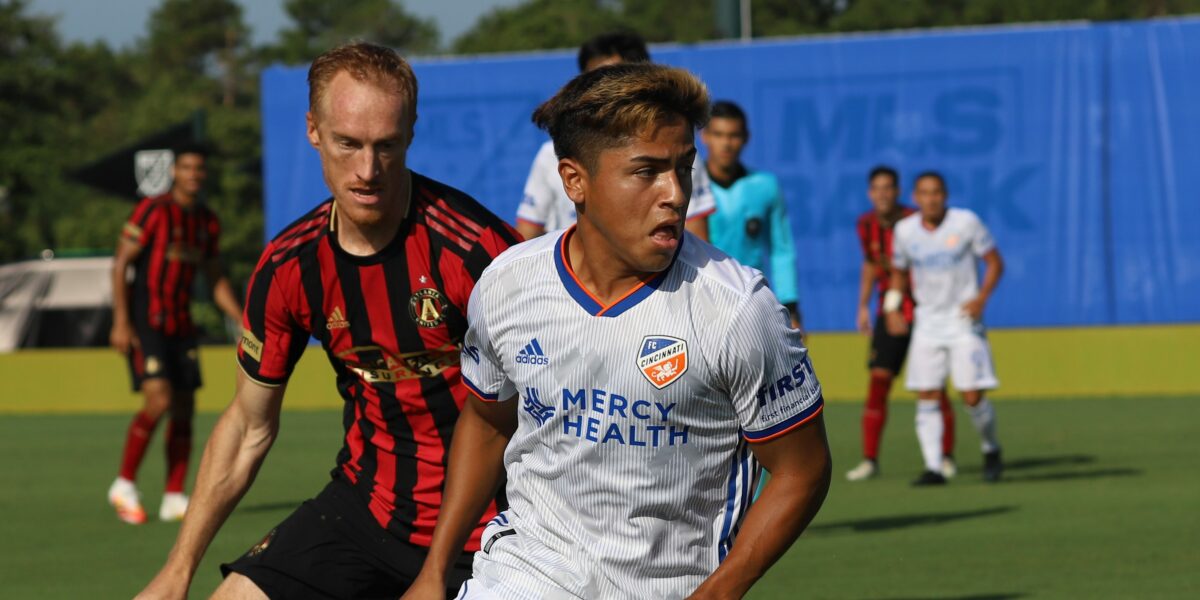 For most of Thursday’s Group E match, FC Cincinnati continued to look like a team struggling for goals as an MLS franchise. Frankie Amaya picked his team up and propelled the underdogs to an important win over Atlanta United thanks to a second-half finish.

Frankie Amaya’s first MLS goal was a beauty, and it helped lead FC Cincy to a 1-0 win and its first three points of the MLS is Back Tournament. The Five Stripes lost two players to red cards with Jake Mulraney and JJ Williams both being sent off.

Frank De Boer’s side had the better of the offensive chances in the opening half, despite losing Mulraney to a needless second yellow card in the 26th minute. Pity Martinez’s swirling free-kick was denied by Przemyslaw Tyton before Edgar Castillo’s left-footed effort was also repelled.

Yuya Kubo’s low right-footed shot in the 59th minute forced Brad Guzan into his first action of the match, but ultimately FC Cincy looked like they were down a man.

Amaya provided the breakthrough in the 75th minute after picking up a pass from Adrien Regattin. After creating space for a shot, Amaya curled a left-footed shot into the top-left corner past a diving Guzan. It was a confident strike from the youngster, who propelled Jaap Stam to his first MLS head coaching win.

Emerson Hyndman and JJ Williams late introductions as substitutes did not help the Five Stripes avoid a second-straight defeat in Orlando. Williams was sent off in second-half stoppage time after VAR ruled in favor of a red card for the striker’s kickoff at FC Cincy defender Kendall Waston.

Frankie Amaya: Amaya came up with a bit of magic for FC Cincinnati to keep its hopes of reaching the Round of 16 alive. He completed 94% of his passes and won two duels from his midfield position.

Amaya Goal: With the match lacking energy, Amaya gave his side a major boost with a wonderfully taken goal. FC Cincinnati showed confidence after going in front, riding out the rest of the win with strong defensive plays.

Jake Mulraney: Playing as a left wing back in De Boer’s lineup, Mulraney showed inexperience and a lack of confidence in his 26-minute shift. Being on a yellow card, Mulraney needlessly pulled down Joe Gyau on a counter-attack which saw the end of his morning.