Ayo Akinola showcasing himself with hot start for Toronto FC 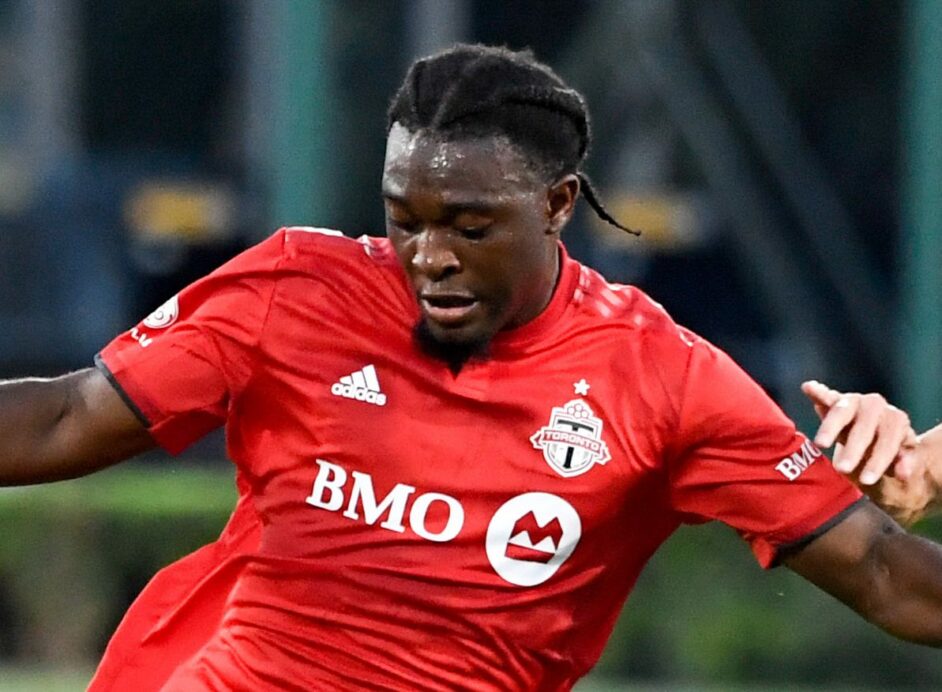 Of all the breakout performances in the MLS is Back Tournament so far, Ayo Akinola’s may be the most impressive.

You might only need to see the chalk outline of Jukka Raitala to be convinced.

Akinola moved to five goals in two games in the competition on Thursday night, as he bagged a hat-trick that helped pace Toronto FC to a 4-3 win against rivals the Montreal Impact. The stellar showing in the 401 Derby put the relatively unknown Akinola in the lead for the tournament’s Golden Boot award, and was also unprecedented.

No player had ever netted three times in MLS play in the history of this Canadian rivalry. Not Jozy Altidore. Not Sebastian Giovinco. Not Didier Drogba. Certainly not bad for a 20-year-old player still figuring himself out.

“In his head he’s always been trying to come to grips, I think, with just who he is at the professional level and what he’s going to be most successful at as a professional,” said Toronto FC head coach Greg Vanney. “For us, it is always a center striker who plays between the centerbacks — or off the one centerback tonight because they played in a back three — who uses his power and speed and his aggressiveness in front of goal.

“He has soft feet, he can hold things up, but he’s so powerful and fast. I always envisioned him as this guy, the guy that he’s showing now.”

A player that has played on the wings with U.S. youth national teams in recent years, Akinola further introduced himself to MLS as an up-and-coming center forward on Thursday. He struck for the first time in the 25th minute to put Toronto FC up 2-1, and netted again 12 minutes later to cancel out an Impact equalizer that was scored just seconds earlier.

It was Akinola’s third goal and the eventual winner that will be a candidate to lead highlight reels, though. The youngster raced forward to get on the end of a flicked header, and proceeded to crush the unprepared Raitala with a strong shoulder-to-shoulder challenge that left the Impact defender tumbling to the ground. Akinola then dribbled in on goal before clipping the ball into the back of the net.

“I think not a lot of players in the league really know Ayo yet and usually by the end of the game most centerbacks have met him quick and that’s usually in some sort of physical confrontation,” said Vanney. “I see a lot of guys, even in the last couple games and we’ve seen it in training, they try to put their body into Ayo and they find out he’s a lot stronger than maybe you anticipated and guys hit the ground fast.

“Ayo is very well aware of how strong he is. He uses his body well and he looks for contact. Before he deals with the ball, he’s looking to put his body in on people and that’s also an incredible trait for a striker like him.”

For Akinola, Thursday’s historic goal-scoring performance should serve to further boost his confidence. The third-year professional had only netted once in his career in MLS play prior to the start of the tournament, but he has raised his haul, and his profile, a considerable amount during this past week.

That said, he is keenly aware that the work is far from done.

“I’m pretty happy to get a hat-trick, but I know it’s not over,” said Akinola. “We still have got one more game left. This game is in the past. I’m already thinking about the next one.”

If the red-hot Akinola can keep this up, Toronto FC will eventually have an interesting situation on its hands. Jozy Altidore has long been established as the starting striker for the club, but has yet to play in the tournament because he is working his way back to full fitness.

Altidore’s absence has opened the door for Akinola, who is making the most of his opportunity, but Vanney will have a lineup selection problem to solve once the veteran is ready to contribute.

Does the Toronto FC manager go back to using Altidore as the No. 1 choice and bench the youngster? Does he continue to ride Akinola’s form? Or does he go in a completely different direction and change things up tactically by deploying a two-forward formation?

“It’s possible to play them together, for sure,” said Vanney. “It is finding a good place for (Alejandro) Pozuelo to complement them. That would be the situation. There’s times when they could swap or whatever, but I think all options are on the table. We’ll see what’s best for our team when the time comes.”

It will certainly be a good dilemma to have when the time comes. For now, Toronto FC is going to keep on turning to one of the breakout performers of the MLS is Back Tournament.

“A guy like Ayo and his profile, he’s always going to get his chances. The question is putting them in the back of the net,” said Vanney. “For sure he is (doing that) now.”