Clark shakes off blunder to prove himself and help Timbers advance 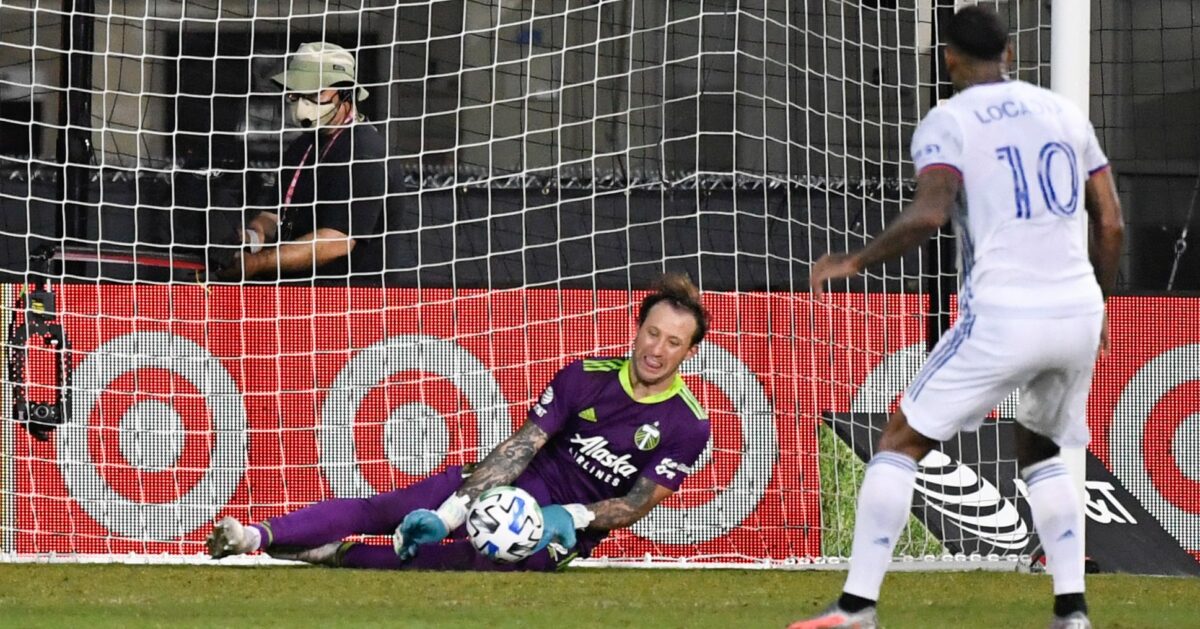 The Portland Timbers survived on Tuesday night. They controlled much of the game, but a costly error from their goalkeeper nearly cost them a trip to the MLS is Back Tournament quarterfinals. Thankfully for the Timbers, goalkeeper Steve Clark had the mental toughness to overcome his suspect footwork to make a huge save in a shootout to lift his team through.

The Timbers played a solid game up front that resulted in lots of possession, 18 attempts on goal, and one well worked team goal midway through the second half. At the back it was a different story. While central defenders Larrys Mabiala and Dario Zuparic had average performances, they were still lucky to have one FCC goal called back by VAR and they were lucky not to concede after a sloppy turnover in the dying minutes.

The most costly gaffe came from Clark, who had a rough night that forced him on the road to redemption after he nearly cost his team a spot in the quarterfinals.

The Timbers were leading 1-0 in the 79th minute when Clark tried playing the ball with his feet as Cincinnati’s Allan Cruz chased him down. Clark bumbled the touch and tried to recover by diving on the ball, but he missed and took down Cruz for an obvious penalty. Jurgen Locadia buried the ensuing penalty kick and the game went to penalties, where thankfully Portland held out for a 4-2 win.

The costly error at the end of the second half clearly wasn’t Clark’s finest moment in goal, but it was the sort of thing his coach and teammates feel he is adept at overcoming.

“I am a strong believer that the most important part is how people respond to situations that are difficult,” head coach Giovanni Savarese said after the match. “Clark, if you know Clark, he’s one that bounces back right away. When we went to PKs he told me, ‘I got it, don’t worry’.”

Clark did, in fact “have it.” He stopped Locadia in the third round of the shootout and watched Kendall Waston sky a shot over the crossbar while his team went a perfect four for four to advance to the MLS is Back Tournament quarterfinals.

“Steve showed the trust that we give him is worth it. So, I think that was wonderful,” Savarese concluded.

Clark’s penalty shootout performance was enough to redeem him in the eyes of his teammates. None of them were happy about the goalkeeping error that forced the shootout, but they also trust their backstop to get the job done when it matters. He didn’t need a lecture about his mistake. He didn’t need the emotional support. He just needed to move on and get the chance to make amends. That’s just the kind of player Clark is.

“If you knew Steve Clark, you would know he doesn’t need support,” winger Sebastian Blanco said. “I love his personality. Steve knew about his mistake and he knew that he would save us. Everybody makes mistakes and there was really no need for us to go that way. He knew that at the very end he was going to be able to perform and fortunately enough we were able to score our penalty kicks too. He fixed his mistake and there was really no need for any conversation after the match.”

The Timbers now face a quick turnaround in their quest for glory in the Disney World bubble. They have three days off before facing off against New York City FC, who have had an extra three days of rest following their round of 16 triumph over Toronto FC.

The Timbers aren’t fazed by their situation, though. Savarese likes the way the team is playing and has full confidence in his side’s physical shape ahead of their next challenge.

“I think having three more days to rest is important,” Savarese said. “That’s something that could help them, but our group is doing very well physically. During the quarantine we worked physically a lot and I think we are going to go out there with our best 11.”