Earthquakes just happy to be together again 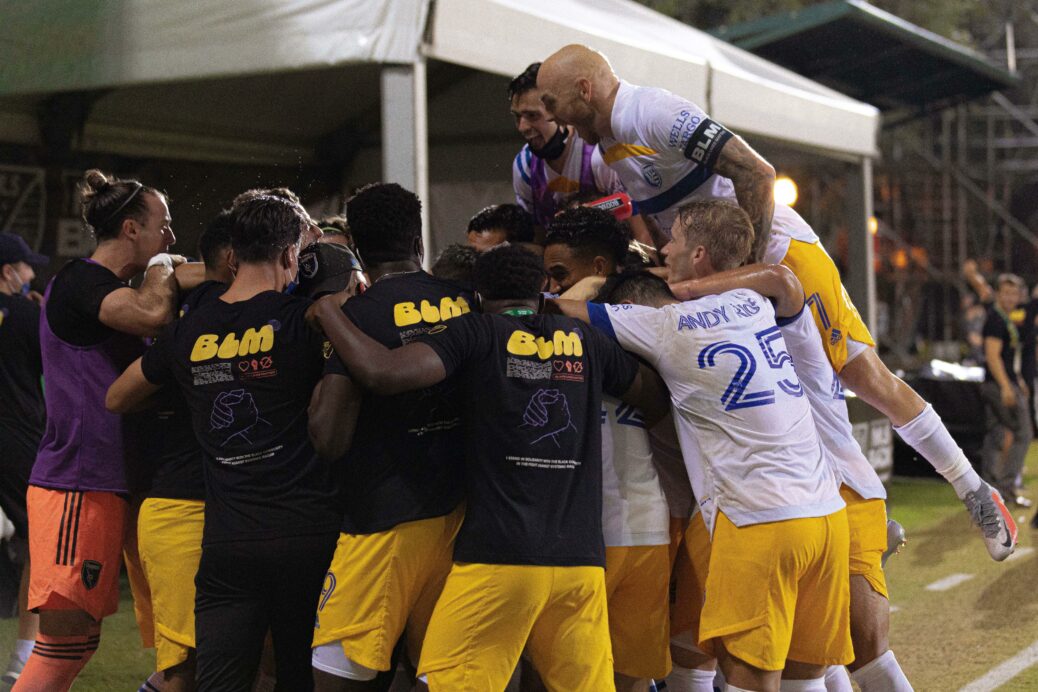 Following their 2-0 win over the Chicago Fire Sunday night in their final group stage match of the MLS is Back tournament – a win that also clinched them their group – the San Jose Earthquakes might have confirmed one thing: this may be the most confident team in the tournament.

But that confidence doesn’t just come from their successful trip through the group stage – a trip where they played the defending champion Seattle Sounders to a scoreless draw in the opener, followed by defeating the Vancouver Whitecaps in a thriller that saw them fight back down two goals, to a strong performance against the Chicago Fire. The confidence comes from something a bit more simple than that.

Actually, a lot more simple than that.

Honestly, they’re just happy to be playing with one another again.

“We’re just excited to be a team again, and playing together,” midfielder Jackson Yueill said in the team’s post-game presser Sunday night. “Now the three games have given us confidence and a lot of momentum, so we’re just happy to be on the field and we didn’t want this to be the last game for a while.”

The Earthquakes made sure that Sunday wasn’t their final match as they’ll play in their Round of 16 match on Monday, July 27 (8:30 pm ET, FS1) as the winner of Group B. They’re the first team in the tournament to win their group, and just the fifth team of the bracket to clinch a spot in the knockout stages of MLS is Back.

Where many might’ve seen the Earthquakes as a massive underdog considering their training restrictions in Northern California due to the coronavirus pandemic, the Earthquakes seemed to take it as a challenge of sorts. Despite being the first team to arrive in Orlando to train, the team couldn’t train together as a whole until they arrived in Orlando, only giving them about two weeks to train together before the tournament kicked off.

They have shown their fitness time and time again throughout the group stage, almost out-hustling their opponents for 90-plus minutes, and after a rusty start in the attack in the opening match against the Sounders, they’ve found the back of the net six times in the last two matches, four of which coming in last Wednesday’s thriller.

But the looks on the faces of the Earthquakes don’t show pressure or adversity. Like Yueill explained earlier, their chemistry is still, simply put as enjoying the time being back together as a team.

“We’ve created a group that enjoys being around each other on and off the field,” Yueill added. “We like to be around each other and it translates into the game. You want to work for your friends and you want to give them your all and want them to look good on the field.”

Not only has the confidence shown on the players on the pitch, but also in Matias Almeyda’s tactics a bit as well.

Since his arrival, the Earthquakes have played a much more aggressive, and unorthodox, style. In Sunday’s match, instead of subbing on defenders to hold onto a slight 1-0 lead in the final 10 minutes, Almeyda subbed on Danny Hoesen, Chris Wondolowski, and Carlos Fierro, for Nick Lima, Judson, and Cristian Espinoza, the game’s lone goalscorer to that point – three attackers for a pair of defenders and the club’s most dynamic winger.

“It depends on the game and what we’re experiencing on the bench,” Almeyda said about the attacking-minded substitution. “I considered that the game was still open and we could’ve ended it with the subs we made. Fortunately, it ended up in a positive way.”

Much like he did on Wednesday, Wondolowski came off of the bench and scored to put the match away at 2-0 in the 83rd minute, heading in a cross from Carlos Fierro that found him perfectly in front of goal. Almeyda’s move to keep his feet on the gas pedal paid off.

Last summer, the Earthquakes were one of the hottest teams in MLS, exploding their way from dead last in the West in April, to as high as second in the conference through the summer, behind LAFC. Throughout that stretch, the Earthquakes introduced the league to their new style on the pitch, an aggressive one that might’ve led to their demise in the final weeks of the regular season, but throughout they showed their fitness and confidence.

They’re doing the same thing again this summer, but instead of any major new tactics, their current string of success in the league’s restart tournament has come from something as simple as playing together, a concept that is talked about in professional sports but displayed well within the San Jose Earthquakes.

And to Almeyda and his staff, that sense of happiness seems to be the most important thing at the moment.

“It’s a team that grows day by day,” Almeyda added. “A team that’s growing collectively and individually, and a team that looks like they’re enjoying playing football which is what I’m mostly interested in.”