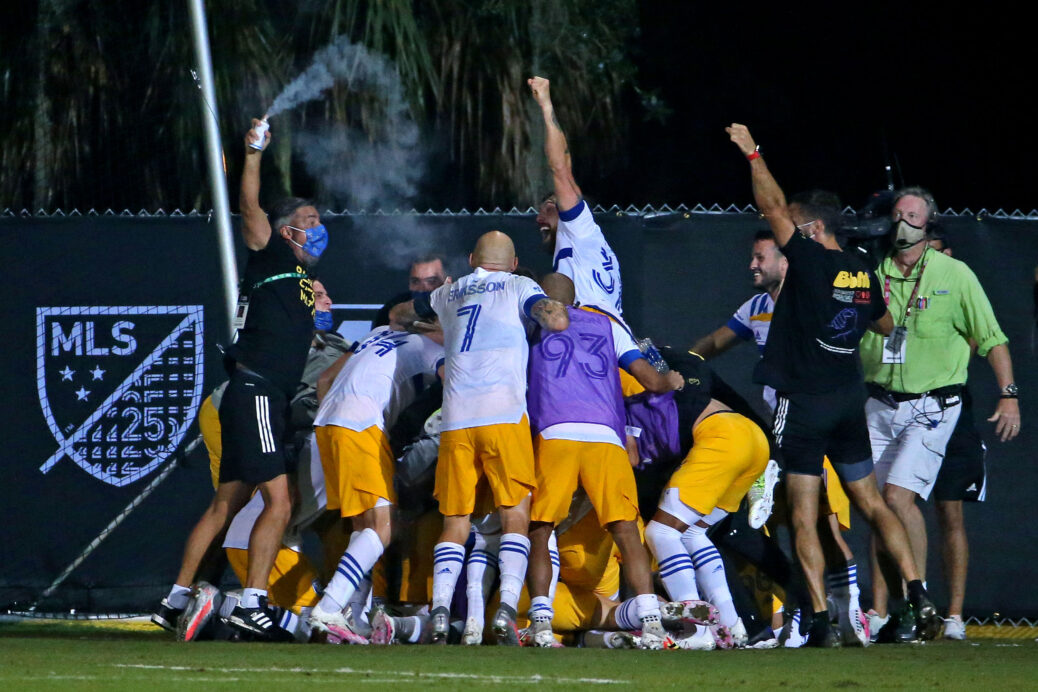 It might just prove the defining image of the MLS is Back Tournament.

The San Jose Earthquakes were down two goals to the Vancouver Whitecaps with less than 20 minutes to play on Wednesday night, and somehow the California club managed to produce late-game heroics en route to a thrilling 4-3 comeback victory that included a dramatic 98th-minute winner.

The scenes that followed the final goal in the dying moments of the Group B affair were diametrically opposed. For the Whitecaps, stunning disbelief. For the Earthquakes, pure rapture and a euphoric team celebration that included an elated assistant coach shooting freeze spray into the air in a manner reminiscent to that of a hardcore fan holding a smoke bomb.

The passion on display was palpable and it could have made you forget for a second that this game was being played in a spectator-less venue.

“The reality of this group is that it is a joyous one,” said Earthquakes head coach Matias Almeyda in Spanish. “It is a group that knows that with me they can make mistakes so long as they insist on playing forward. I give them that security and hope they convey it, and they are giving back to me these types of happy nights of soccer that stay engrained forever.

“This game will stay in my head and heart because these are hard matches, difficult matches, especially in a tournament setup that does not permit you to lose points. From that standpoint, I’m very happy with all of the players.”

While the Earthquakes were on cloud nine after the game, the Whitecaps were left to wonder what exactly went wrong. They crumbled in horrifying fashion during the match’s final 30 minutes and change, allowing Chris Wondolowski, Oswaldo Alanis, and Shea Salinas to find the back of the net.

“Unfortunately, we weren’t able to close the game,” said Whitecaps head coach Marc Dos Santos. “It is really hard right now. The players are not ready to play 90 minutes, they are not ready to play 100 minutes. With the injury time, it gets very difficult and then it’s hard to keep the composure until the end. We felt it during the game.”

Dos Santos added that not having a full complement of players hurt the Whitecaps. The Canadian outfit’s depth for this tournament has been depleted with the absences of eight players, including Lucas Cavallini, Fredy Montero, Erik Godoy, and Janio Bikel.

Still, the Whitecaps were left to rue what could have been.

The Whitecaps may have let three points slip away, but the Earthquakes dominated the run of play on Wednesday. Almeyda’s side out-possessed the Whitecaps by a 68-32 percent mark, outshot them by a 30-7 margin, and had 22 corner kicks compared to the four it conceded.

“I stay with the attempt and accept the mistake. Now if in the face of a mistake, I don’t attempt again then I worry. But the players are showing that even in the face of mistakes they keep insisting, and that shows strength within the group.”

It surely did on Wednesday night. The Earthquakes pulled off some unbelievable late-game heroics, and the magic and passion they conjured up while doing so will not soon be forgotten.

“What you saw was a team that maintained its identity even in the face of adversity,” said Almeyda. “It was a team that is searching for its own style of play, a team that respects every opponent they face, and that never gives up on itself.

“We really have a great group and I’m proud of the team I coach, but I am even more so thankful.”