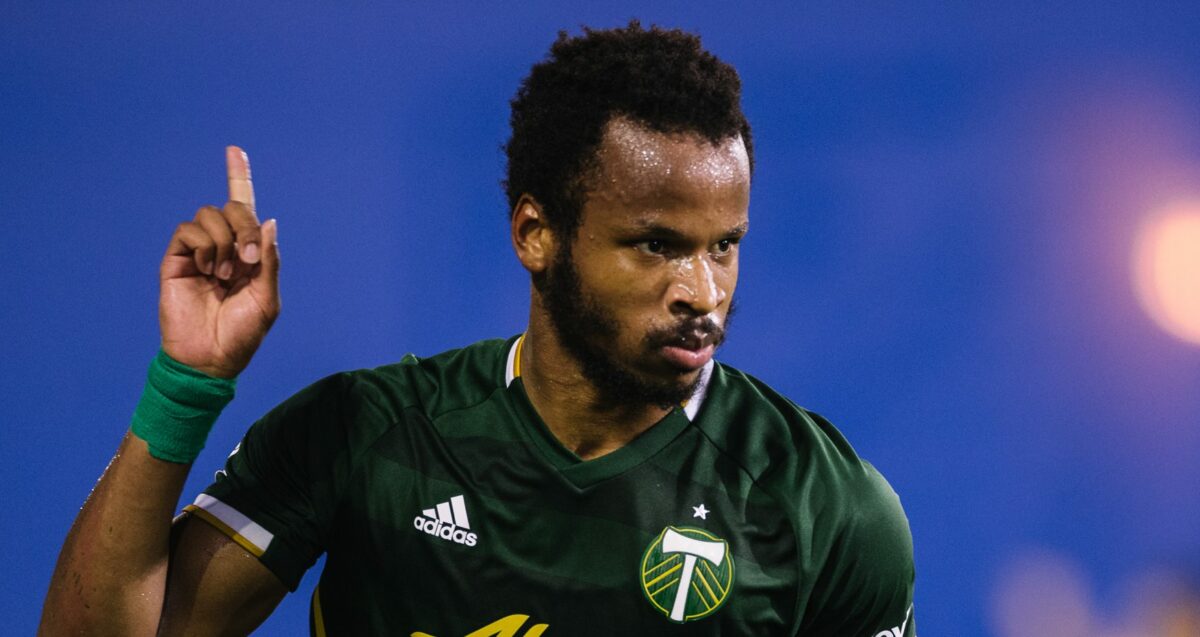 When you think of the Portland Timbers attack, the first names that come to mind are star midfielders Diego Valeri and Sebastian Blanco. A third attacking threat has stepped up for the Timbers at the MLS is Back Tournament, and Jeremy Ebobisse is starting to look like he’s ready to add his name to Portland’s marquee.

Ebobisse scored his second goal in as many matches as he helped the Timbers clinch a berth in the knockout round. A 2-1 win over the Houston Dynamo on Saturday night in Orlando was the latest strong performance for the club and its 23-year-old striker.

Since being the No. 4 overall selection in the 2017 MLS SuperDraft, Ebobisse has had to work for a starting role in Giovanni Savarese’s squad. After 18 combined league goals in his first four seasons in Portland, Ebobisse has quickly become one of the top, young talents in MLS and Savarese admits he’s earned everything he’s achieved.

“The players have to earn their spot,” Savarese said post match. “Nothing is going to be given to anybody. He’s earned it. He has earned, he has worked hard, he has shown development every single year. In 2018 when he came in against Colorado, he showed that he wanted to be in Portland. I think that in the finals we spoke and there were things that maybe he could have shown a little bit more, so he showed still that he needed to mature.”

“Last year, a tremendous season. A player that played basically every single game. This year he started with an even higher level, so the competition up top is difficult for me because I think everybody is fighting to be able to play. [Ebobisse] has deserved it and another good goal today that was important for us.”

After appearing in all 34 games in 2019, Ebobisse has picked up where he’s left off in 2020. Saturday’s performance not only saw him score, but overall Ebobisse put in a strong shift at the top of Portland’s 4-2-3-1 formation. He won four of his seven duels, two fouls, successfully dribbled past two Dynamo players, and made two recoveries.

With his only shot on goal in the match, Ebobisse showed his confidence with a missile into the bottom-right corner. Dynamo keeper Marko Maric tried to repel the effort, but sadly could not as Portland took a 1-0 first-half lead.

Diego Valeri added a second-half goal to ice the win for the Timbers, who have six points from its opening two matches. A longtime veteran like Valeri is happy to see Ebobisse thriving for the club, doing more than just scoring goals.

“It’s always nice to see Jebo play there, actually sometimes he played really hard against the two central backs alone, and allowed us to be more in the middle, and he holds that position,” Valeri said. “So it’s been amazing in this tournament. I’m very happy about the striker scoring goals. The goal today was a different level and allowed us as a team to manage the game, which is to win it, which is the most important.

“So I’m very happy about his improvement, he’s a very mature guy and I’m sure that he is going to give us a lot of happiness to our team.”

The Timbers split their first two regular season matches in 2020 before the COVID-19 pandemic forced a halt to league play. Since then, they have looked like a different side, picking up wins over West rivals L.A. Galaxy and the Dynamo to set up a showdown with LAFC on Thursday, with the winner clinching the top spot in Group F.

Ebobisse’s only league goal against LAFC came in a 4-1 loss back in March 2019, but the young striker did help eliminate Bob Bradley’s side in a 1-0 U.S. Open Cup quarterfinal tie later that year. The U.S. Men’s National Team prospect believes the team’s form and confidence will give the Timbers a good chance of beating the tournament favorite LAFC.

“You don’t come to this kind of tournament unless you expect to be in a top position coming out of the group, adding points to the regular season tally and then pushing on into the knockout round,” Ebobisse said. “So I think it’s been acknowledged that we didn’t have a perfect start to the season, with one win and one loss and maybe not playing as well as we could have.

“But this past quarantine break everyone’s been real serious, and we’ve regrouped and I think that that’s shown in the first two games,” Ebobisse said. “Obviously, we still have a challenging game against LAFC, and who knows how we’re going to approach it and, you know, whoever whatever plays. We need to make sure we get three points again to keep that momentum going into the knockout rounds because we want to make a good run.”