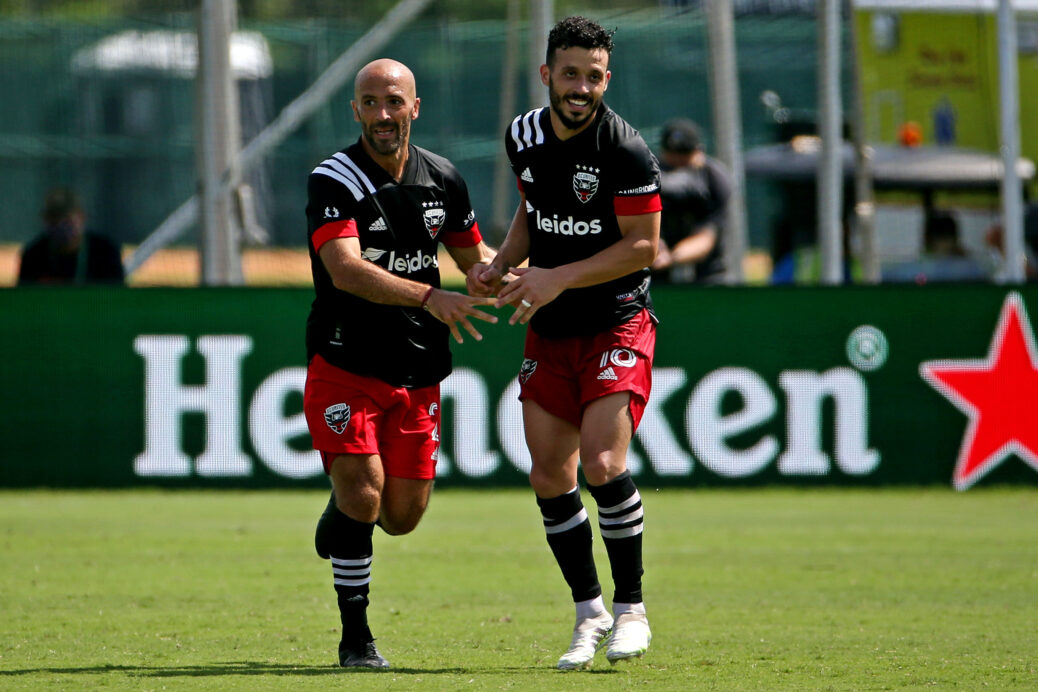 In starting D.C. United’s incredible comeback tale, Federico Higuain may have just begun penning his own.

D.C. United grabbed one of the more dramatic results in the early stages of the MLS is Back Tournament on Monday, rallying from two goals down with 10 men to pick up a 2-2 draw vs. Toronto FC. The improbable comeback seemed very unlikely as the game entered the final minutes given everything that had transpired, but the insertion of Higuain into the match in the 80th minute made the seemingly impossible possible.

Four minutes after stepping onto the field, Higuain raced onto a scrumptious through ball in between Toronto FC’s centerbacks and delicately chipped a shot over onrushing goalkeeper Quentin Westberg. The incredible display of finesse and precision gave a fairly dreadful D.C. United a massive lifeline — and this in Higuain’s club debut.

“He’s the type of talent that as he gets fitter and more engrained in this group, he might be a guy that now is hard to take off the field,” said D.C. United head coach Ben Olsen on Monday. “He has that ability, his tempo, the way he can pull the strings. It is an important thing and something that as you see today we need it. We’re still not connecting passes in the right way, we still are lacking a little bit of feel in how we build.

“Part of that is we’re still a new team trying to figure out how we’re going to go about the attacking side. Part of it to me was just quality in individuals that was lacking at times, but he’s a guy that can give us that.”

It is hard for anyone in MLS circles to deny that Higuain oozes quality. The Argentine playmaker has spent nearly a decade terrorizing defenses in the league, be it with his vision and pinpoint passes or with his ability to conjure the type of goal-scoring magic that helped shock Toronto FC on Monday.

What remains a question about the 35-year-old attacking midfielder is how much he has left in the tank. Higuain sustained an ACL injury in 2019 that put him on the shelves for more than a year, and ended his time with the Columbus Crew in less-than-ideal fashion.

One team’s loss can be another’s gain and Higuain might still have plenty to offer. That is, if his D.C. United debut is anything to go by, anyway.

“At the moment I faced the goalkeeper, I knew the distance between him and I will give me the opportunity to chip it,” said Higuain in English. “I am confident in my game, my teammates trust me, and that’s why I tried that shot. It was a good goal and helped us believe that we can take the game.”

The injection of confidence that Higuain’s goal gave D.C. United pushed the team on to find a stoppage-time equalizer through Frederic Brillant. Higuain did not directly participate in the tying goal, but he did not need to.

In just four minutes, he gave D.C. United what it could not produce in the previous 80. His impact was felt — against one of the more talented sides in the league while playing down a man, no less.

“The goal is important of course because it gives you that emotional push to keep fighting in the game, knowing that soccer always gives you another chance,” said Higuain in Spanish. “Thankfully, we had that one last chance and Fred could make it count.”

Higuain, who signed with D.C. United in early March, is also trying to make it count with his new team. The veteran said Monday that he wants to keep playing, and added that he feels as eager to prove himself now as he did when he was a teenager looking to turn pro.

Hunger and desire can bring the best out of someone, and that could prove to be the case with Higuain this season. He just showed he can still make a massive difference in limited minutes, starting not only D.C. United’s incredible comeback tale but also quite possibly his own.

“Even though we’ve only been around him for a short amount of time, he is a big part of our team already,” said Olsen. “He is an older player that has been around and the guys have a lot of respect for him. He has been a great teammate. He’s been a great guy for me to have chats with on the side about our team, whether it’s tactics and his thoughts on the game because he’s a very bright guy.

“For him, to come in and have that type of impact on our team is a lot of fun as a coach to see and I know he’s happy and his family is happy that he’s back after a long road with the injury.”