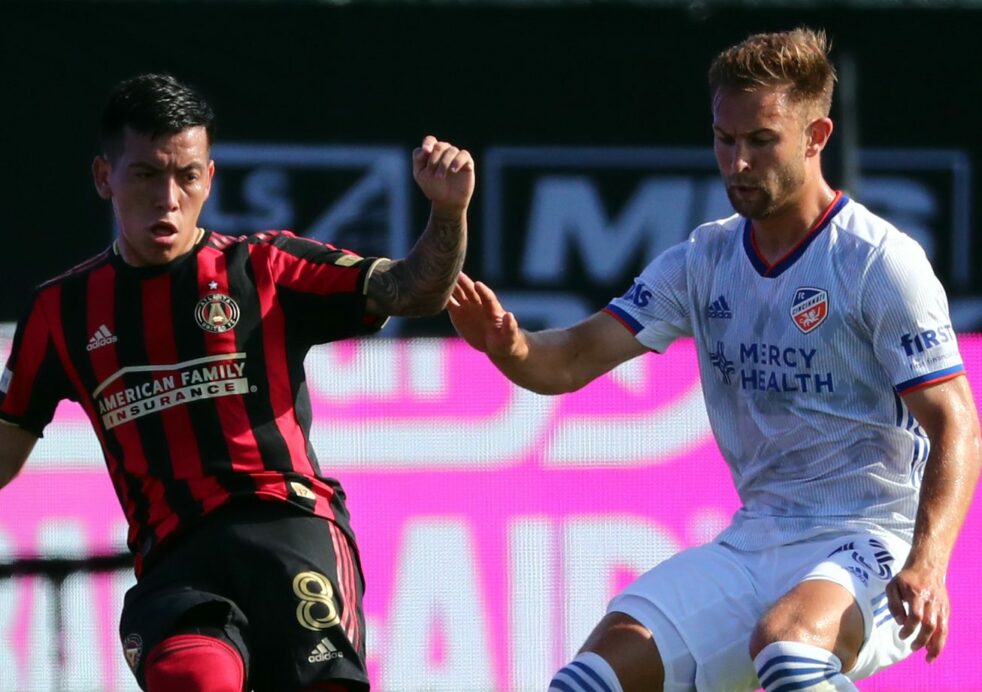 The typically-potent Atlanta United attack has not scored in more than 300 minutes, but head coach Frank De Boer is not concerned about his team’s ongoing drought.

Atlanta United was victim to one of the most surprising results thus far in the MLS is Back Tournament, dropping a 1-0 affair to FC Cincinnati on Thursday morning. The shutout loss was Atlanta United’s second in as many games, and extended a goal-less drought across all competitions past the five-hour mark.

It was always going to be a challenge for Atlanta United to replace injured star striker Josef Martinez, but De Boer stated in the aftermath of the Group E loss that he was “not worried” about the state of his team’s attack. He said that he believed the team created enough chances in last Saturday’s loss to the New York Red Bulls, and that Atlanta United was blanked in this one in large part because it was reduced to 10 players for more than an hour.

“After 26 minutes, we were one man down so then the whole plan what we thought of how to play against Cincinnati, you can throw it overboard,” said De Boer on a video conference. “I think after being down a man we created even more chances than with 11 because they had to come and they didn’t have an idea for how to play against 10 men.

“I think we were more dangerous at that moment. When you play with 10 men, you have to hope that they’re going to force it and that we’re going to get our chances because they force it.”

FC Cincinnati did not really try and force the issue, though. Jaap Stam’s side allowed Atlanta United to continue to have the ball for large stretches, opting to stay organized defensively in order to limit the space in which Atlanta United could play. The reactive approach ultimately bore fruit, as central midfielder Frankie Amaya curled a gorgeous shot in from distance in the 76th minute.

Try as it might, Atlanta United could not create that same type of magic and it was blanked once again. The team’s scoreless drought has now reached 305 minutes, with its last tally coming via Emerson Hyndman in the 55th minute of a win against, coincidentally enough, FC Cincinnati in early March prior to the pandemic shutdown.

Maybe Atlanta United would have put an end to that dry run on Thursday had things played out a bit more normally, but the early red to Mulraney and De Boer’s subsequent decision to sub off of lone striker Adam Jahn in favor of defender Edgar Castillo played a part in the inability to find the back of the net.

“Normally you’re going to drop a little bit deeper and Adam is not a player that is going to beat players with his speed,” said De Boer of his tactical adjustment following Mulraney’s ejection. “You have to have players who can make 1-against-1s. Of course, with set pieces he can be dangerous but probably you have to drop deeper so for me the only choice was in that moment to put him out.”

In the end, Atlanta United finished with just three shots on target and was left in a precarious situation in the MLS is Back Tournament. The club has zero points from two matches, and will likely need a win in the group stage finale vs. the Columbus Crew and some outside help to have a shot at advancing to the knockout rounds.

To do that, Atlanta United will need to find a way to end its scoring drought. De Boer, however, is confident the team will be able to do just that.

“I’m not worried about scoring goals,” said De Boer on Thursday. “I know we can score goals.”