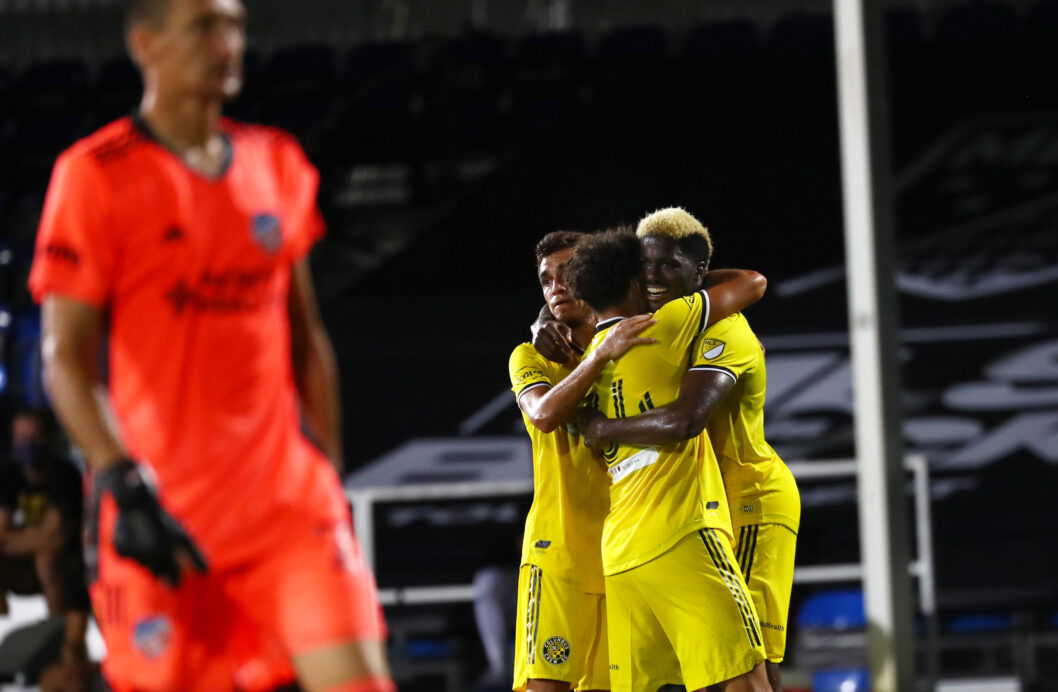 A late kickoff on Saturday evening that bled into Sunday morning saw the Columbus Crew rout its rival FC Cincinnati by a 4-0 margin in the MLS is Back edition of the Hell is Real Derby.

Cincinnati found itself with an early opportunity to score in the 12th minute when Adrien Regattin held the ball in the box waiting for support on a counter opportunity, but without contact, Crew defender Vito Wormgoor went down with a leg injury. After a few seconds of confusion, Regattin put the ball out of play and squandered what was his team’s best chance of the evening.

From there, the Crew went on a surge that gave newly-installed FC Cincinnati boss Jaap Stam a rude welcome to MLS life.

League newcomer Lucas Zelarayán opened up the scoring with a must-see set-piece goal from just outside the box in the 27th minute, the strike is his second in Black and Gold.

180 seconds later, Darlington Nagbe and Youness Mokhtar found a stream that ended in Gyasi Zardes flying through Cincinnati’s backline to bend one by goalkeeper Przemysław Tytoń inside the box.

The 28-year-old U.S. National Teamer picked up a brace in the 49th minute thanks to a perfectly placed ball from Zelarayán from outside the box. The ball hit Zardes in stride and there was no stopping his shot from point-blank.

After another spell of controlling play, Columbus mercilessly struck again at the hour mark, Mokhtar this time. Involved once more, Zelarayán combined with Héctor Jiménez to set Mokhtar up in the box and he curled it past an outstretched Tytoń.

Group E is back in action on Thursday. The Crew faces the other winner of the group in New York Red Bulls, while Cincinnati and Atlanta United square off in search of their first tournament wins.

The man who scores the most gets the honor. Zardes’ brace could be a tremendous help in advancing past the group stage if things come down to goal differential.

Apart from the impressive touch, Zelarayán’s golazo to open the scoring sent the Columbus into a high gear which was carried out for the entirety of the game.

You aren’t off to a great start when your MLS debut is one to forget, but Stam will want to scrap whatever the plan was after taking Saturday’s beating as he becomes the newest manager to lift Cincinnati from its cellar-dweller status.