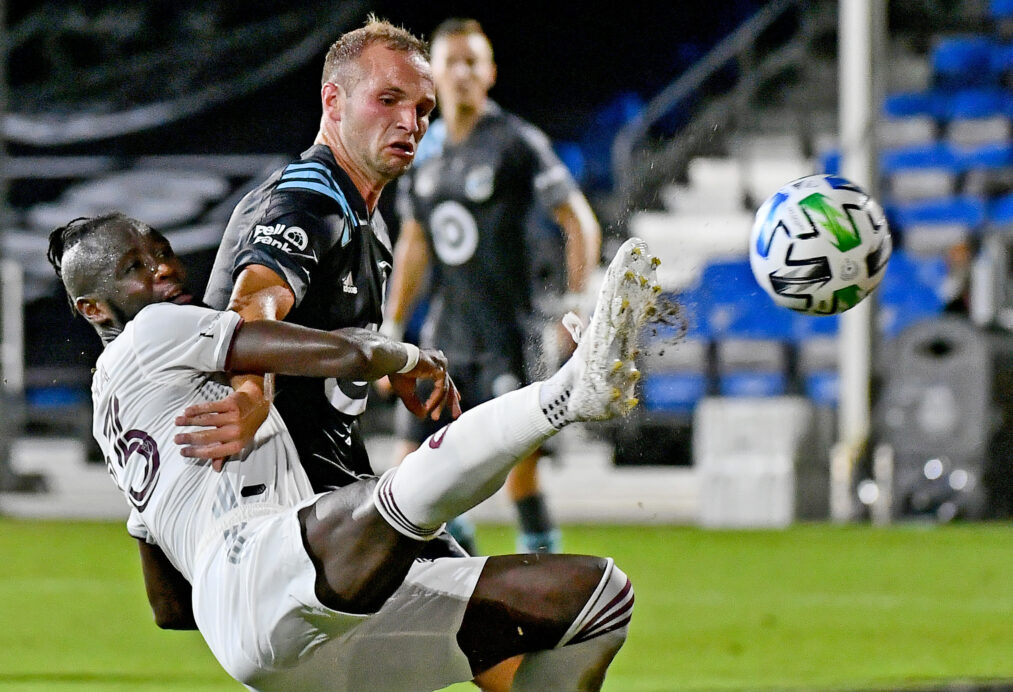 Minnesota United came back from a goal down on Wednesday, playing out to an exciting 2-2 draw against the Colorado Rapids and clinching second place in Group D.

The Rapids were already eliminated from the MLS is Back Tournament heading into Wednesday’s action following Sporting Kansas City’s win over Real Salt Lake. The draw was enough for the Loons to secure second place in the group and set up a game against the Columbus Crew in the next round.

The game remained a lively affair even if their fates were sealed before kickoff, with Ola Kamara opening the scoring inside 20 minutes. The veteran striker slotted home expertly at the near post after being played through by Nicolas Benezet.

Colorado’s lead was shortlived with the Loons equalizing with under ten minutes to play in the half. Ethan Finlay deflected Jan Gregus’s effort from a freekick past a helpless William Yarbrough. The winger was not done there netting his brace just seven minutes later on the stroke of half time.

Romain Métanire did well to free himself up in behind and squared an inch-perfect pass across the net for Finlay. The Minnesota man made no mistake about it, tapping home the go-ahead goal into the empty net.

The Rapids pushed hard for an equalizer and largely dominated the proceedings after the restart. Once again, Jonathan Lewis provided the spark off the bench, netting his second goal in consecutive games in an impressive cameo appearance. The 23-year-old volleyed home with power in the 60th minute after a failed clearance teed him up inside the eighteen-yard box.

Lewis’s effort would be enough to gift the Rapids their first point of the tournament, with the sides playing out to an enthralling 2-2 draw. Minnesota United will now take on the red-hot Columbus Crew on July 28. The Crew has emerged as early favorites at the MLS is Back tournament, winning all three of their group stage games.

Ethan Finlay: They may not have been the prettiest strikes, but Finlay will take them. The winger was a constant threat on the night and capped off an energetic performance with a well-taken brace.

Jonathan Lewis’s equalizer: Lewis is quickly developing a reputation as a super-sub, netting his third goal off the bench this season. The goal may not have meant much for the final standings, but Lewis’s volley deserves its fair share of plaudits for the technique and sheer power behind it.

Luis Amarilla: Amarilla started his first game of the tournament and struggled before getting the hook for Aaron Shoenfeld in the 74th minute. The Paraguayan had a performance to forget and will be hoping to recreate his past goalscoring exploits against the Crew in the next round.