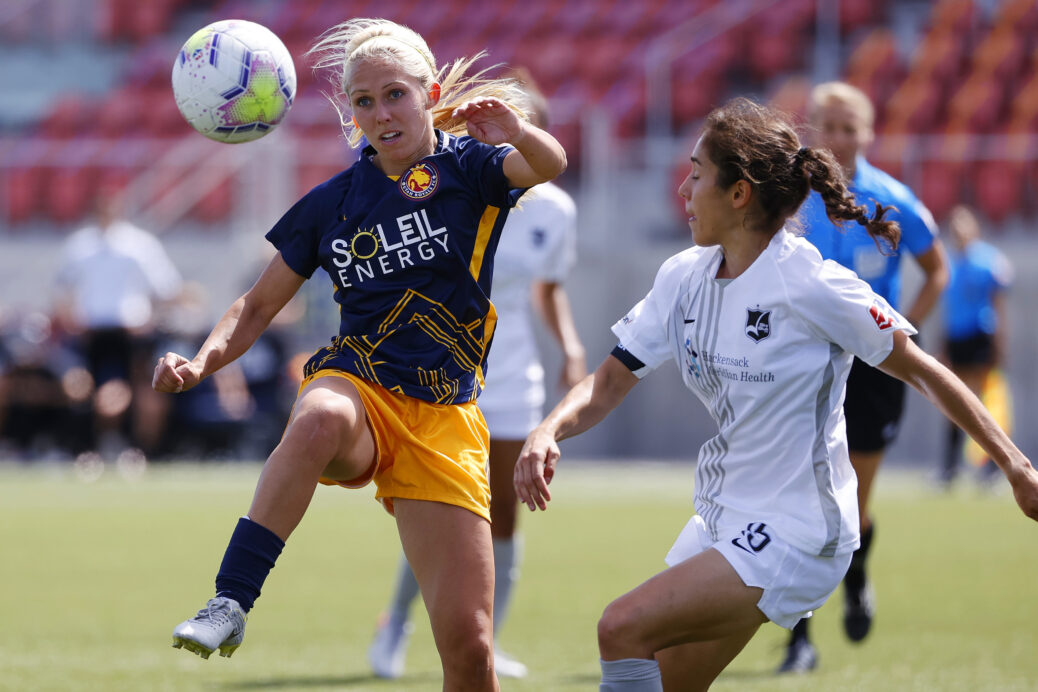 The Utah Royals ascended to second place after shutting out Sky Blue FC in the first of two matches on the 4th of July holiday. Utah picked up a 1-0 result, which now gives them four points through two matches at the NWSL Challenge Cup.

The deadlock was broken in the 41st minute as Veronica Boquete threaded the needle for a perfectly weighted through ball to striker Amy Rodriguez. A first-time finish from Rodriguez marked the only goal of the afternoon.

“It was a great ball from Vero,” said Rodriguez during a halftime interview. “She’s one of the best midfielders in the world, and she slipped me a wonderful ball.”

It was the first goal for Rodriguez during the Challenge Cup, while Utah has had four different names on the scoresheet so far this competition.

The margin of victory may have been slim, but comfortable for the Royals who never seemed overly threatened by Sky Blue’s attack. The New Jersey-based team is yet to score in two games. Sky Blue goalkeeper Kailen Sheridan, a big reason for Sky Blue claiming a point against OL Reign last Tuesday, has conceded against only Rodriguez so far.

Houston has no problem against OL Reign

Much like the backdrop of Zion Banks Stadium erupted in Independence Day fireworks, the Houston Dash also exploded onto the scene Saturday night by defeating OL Reign 2-0.

Houston began the celebrations by starting on the front foot. Their strategy of pressing in the final third led to immediate reward when Shea Groom hurried a clearance from goalkeeper Casey Murphy. The ball landed at Bri Visalli who quickly found Groom. The Dash forward played a backheel pass to a wide-open Kristie Mewis, and proceeded to slot home the night’s first goal.

🤩 Beautiful build up play, and @KristieMewie hammers it home!

“I think we’re at our best when we do press and it led to a goal,” said Kristie Mewis at halftime. High defensive work rate from Rachel Daly almost led to a second goal for Mewis after the half time intermission, but her shot sailed just over the crossbar.

“I think the press is part of our identity now,” said Groom after the game. “We wanted to come out here and make a statement, and that is the Houston Dash are a force to be reckoned with.”

Houston was not done adding to the advantage. In the 54th minute, Daly lofted a perfect cross into the box to an unmarked Groom. She made no mistake and emphatically headed it past Murphy.

“Rachel put the ball on an absolute platter,” said Groom. “Credit to her, all I had to do was put my head on it.”

The match highlighted the disparity between the two clubs who find themselves on opposite trajectories. In the 2019 NWSL season, Houston finished outside the playoff spots, while Reign secured a spot in the semifinals. Reign enjoyed 13-2-1 lifetime record over Houston heading into the match.

But the Challenge Cup is telling a different story. The undefeated Dash, one of the early surprises of the tournament, have arguably the most explosive offense in the league with five goals to their name. Meanwhile, the winless Reign are struggling to adapt to a head coaching change that saw former manager Vlatko Andonovsky appointed as U.S. Women’s National Team head coach. New manager Farid Benstiti’s side is also lacking the superstar presence Megan Rapinoe so often brings.

Houston are tied for second with Utah (barely edging the Royals on goal differential) behind only tournament favorites North Carolina Courage. Sky Blue and Reign remain gridlocked with two other teams tied for last place.

The Royals return to the pitch against Reign, while Sky Blue will look for their win against the Houston Dash. Both matches take place on July 8th, and the games will air on CBS All Access.